A county commission is representing its people and the waters of Georgia in a resolution Dougherty County sent to FERC which says in part: 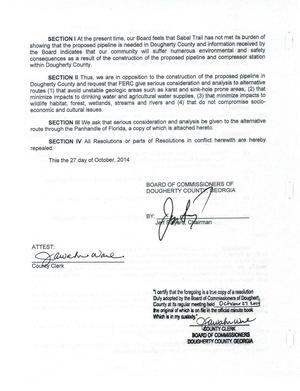 SECTION II Thus, we are in opposition to the construction of the proposed pipeline in Dougherty County and request that FERC give serious consideration and analysis to alternative routes (1) that avoid unstable geologic areas such as karst and sink-hole prone areas, (2) that minimize impacts to drinking water and agricultural water supplies, (3) that minimize impacts to wildlife habitat, forest, wetlands, streams and rivers and (4) that do not compromise socio-economic and cultural issues.

At least one county is doing something about item #9 in the GWC Dirty Dozen. Later that same week, the city of Albany, Georgia joined its county commission in that resolution.

Who will be next?

If enough counties and cities oppose the unnecessary, hazardous, and environmentally damaging Sabal Trail pipeline, pretty soon it will go where it should: nowhere.