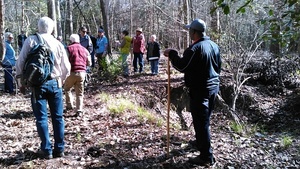 At its next meeting, the commission will consider sending a letter to the U.S. Army Corps of Engineers, which must issue a permit for the pipeline project.

Wainwright asked to have a discussion on Suwannee County sending a similar letter.

There were discrepancies between documentation provided by Sabal Trail and what he saw when he visited the route, he said.

The Suwannee County Commission attended a workshop in February, where they traveled to the spot where the Sabal Trail pipeline would cross the Suwannee River. Though Wainwright didn’t attend that workshop, he later visited different parts of the route, he said.

According to Sabal Trail, there are no active sinkholes in a close proximity to the pipeline path.

However, Wainwright said, there is a sinkhole within around 75 feet of the route.

“It was closer than what had been described in the Sabal Trail outline,” he said. “Significantly closer.”

The letter would ask the corps to go out and look at that particular area, near the Suwannee River State Park….

Several local residents, in addition to environmental groups, oppose the pipeline. One of the concerns, which has been brought up repeatedly by groups such as WWALS Watershed Coalition, is the sensitive nature of Florida’s geology….

Be there if you can.