No new spills reported in the Suwannee River Basin in Georgia! We do have some clarifications on old spills, some even with raw sewage totals.

Since the Sewage Spills Report GA-EPD posts each day replaces the previous one, WWALS has started picking up those reports daily and parsing out differences.

This has revealed a total for a Quitman report, some Smithbriar Drive spelling corrections, a total for one Valdosta spill location, and where it goes (spoiler: into the Alapaha River Basin).

We don’t see any new spills in the past two weeks in the Suwannee River Basin in Georgia.

We also don’t see a final total from Valdosta for its most recent big WWTP spill, nor for several of its other spill locations.

GA-EPD still doesn’t know that Okapilco Creek flows into the Withlacoochee River. No, not the Ochlockonee and not the Oconee.

ALso one Dekalb County spill rolled off the thirty-day window that GA-EPD includes in these reports.

No new spills appeared in the Suwannee River Basin in the 2018-12-26 report. Numerous reports elsewhere rolled off, and three new ones came on from Pike, Clayton, and DeKalb Counties.

This 2018-12-27 report is somewhat amusing because it corrects spelling errors in Valdosta. Yes, it’s really Wainwright Drive, just south of VSU on One Mile Branch, and it’s really Smithbriar (not Midbriar) and North Oak Street on Three Mile Branch. 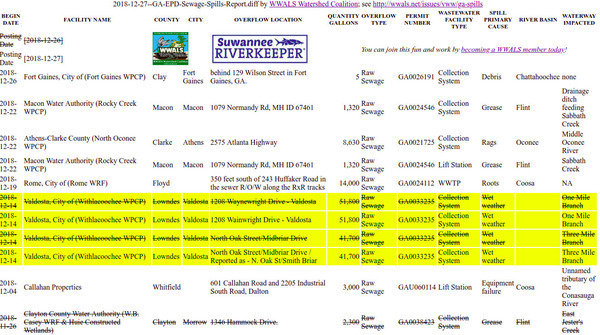 For 2018-12-28 we’ve got further clarification of what happened with “Mid Briar Drive”: it got phoned in and written down that way, then a written report said “Smith Briar”.

More importantly, we have a total for the spill at Bay Street and Hines: 3,330 gallons of raw sewage. Also where it went: “Dukes Bay”. Dukes Bay Canal flows into Mud Swamp, then the Alapahoochee River, and the Alapaha River. Interesting that Valdosta apparently didn’t know that. 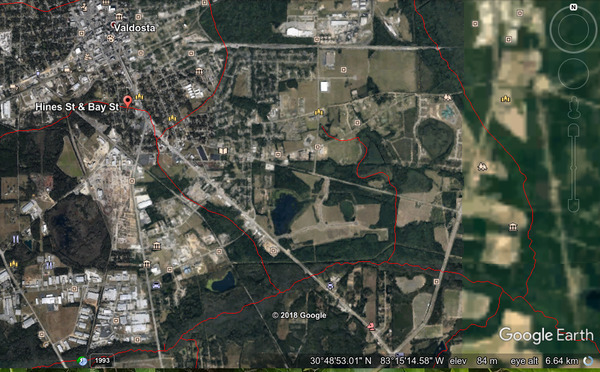 The New Year’s Eve 2018-12-31 report showed nothing new for the Suwannee River Basin, but plenty of new reports to the northwards.

These difference tables may not be very exciting for this recent data. But new ones automatically generated should make seeing what’s going on much easier.

For background and the raw data, see wwals.net/issues/vww/ga-spills.