Received Thursday. The Rivers Task Force of the dozen downstream Florida counties will be voting next Thursday on a resolution asking the State of Florida (FDEP, SRWMD, etc.) to do something about Valdosta’s sewage spills. 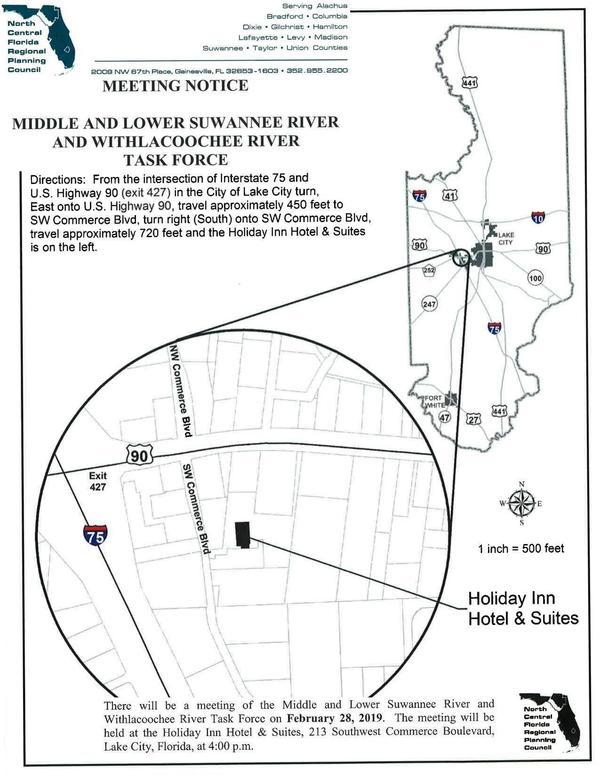 What: A meeting of the Middle and Lower Suwannee River and Withlacoochee River Task Force

The agenda, after the customary introductory items, has only a resolution and Next Steps. 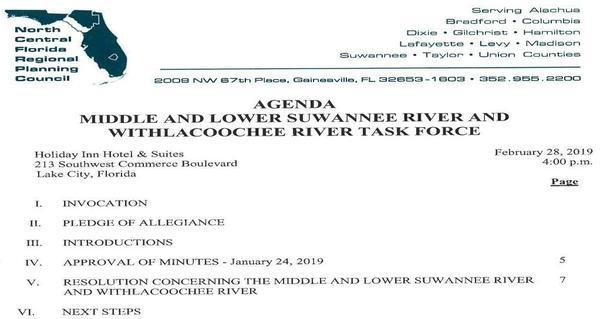 Resolution and Next Steps

Not on the agenda, but mentioned in the minutes of the previous meeting:

The Task Force agreed that the next steps should be to request a meeting with the Governor and Commissioner of Agriculture. Chair Davis informed the Task Force that the next meeting will be held on February 28, 2019 at 4:00 p.m. prior to the next Council meeting at the Holiday Inn and Suites in Lake City.

I don’t know whether this means that meeting with the Governor and Agriculture Commissioner has been moved earlier, already happened, isn’t going to happen, or will be at the Task Force meeting.

Maybe the Task Force can get a commitment from the Governor more than this letter of status quo.

The minutes say some Task Force members did already have this other meeting, which we knew because Madison County published a picture on its facebook page:

“On Friday, December 21st Brian Kauffman, Rick Davis and Scott Koons traveled to Valdosta to meet with city officials. They had the opportunity to speak with City Manager Mark Barber, Public Information Officer Ashlyn Becton, Director of Utilities Darryl Muse and Mayor John Gayle. They voiced their concerns over continued sewage spills and discussed ways to improve communication to ensure Madison County is notified immediately of any spills. While there, the City of Valdosta stated they were in the process of digging an emergency overflow pond to help hold the rainwater that is causing the overflows.”

That was the day after GA-EPD started publishing all Georgia Sewage Spill Reports each business day, so now all the downstream counties can know when there is a spill. 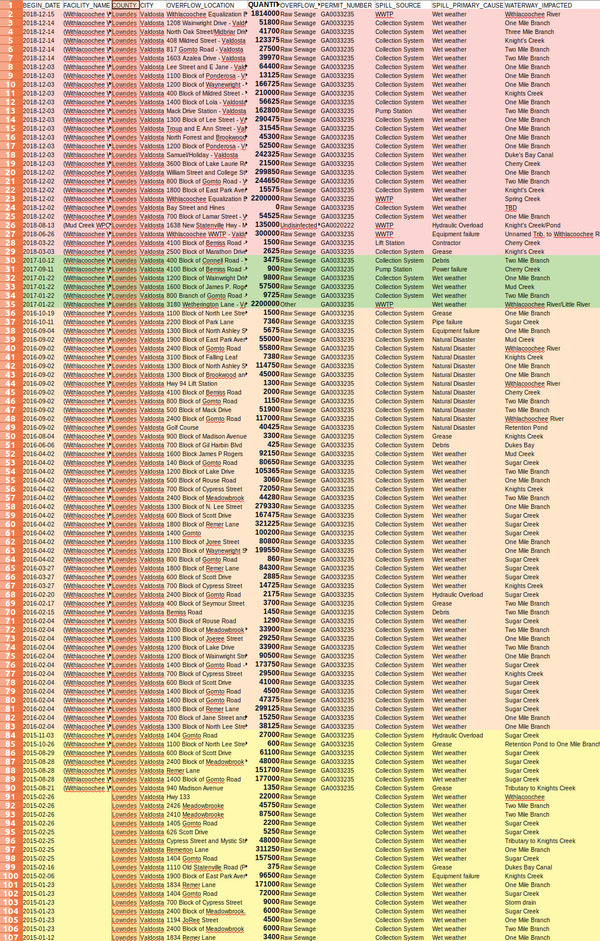 The Minutes do not reflect the later meetings with Florida state legislative delegations in Madison County, Hamilton County, or Suwannee County (apparently all 16 January 2019), nor the February SRWMD Board Meeting, in which SRWMD board members also asked FDEP to at least test the rivers more frequently. 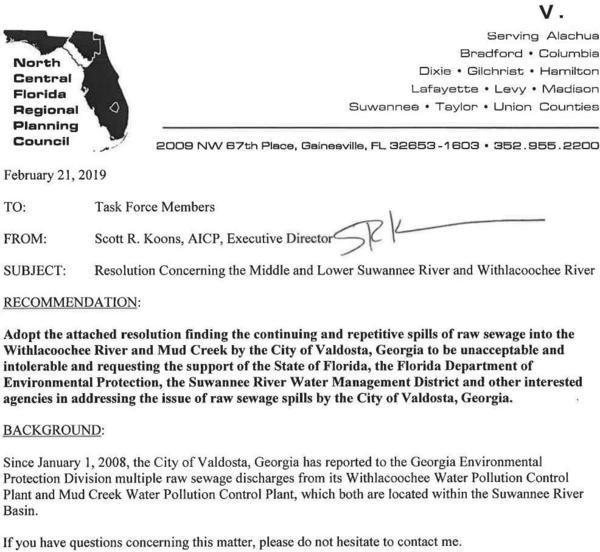 Seems like they’re asking Georgia and Florida state agencies to do their jobs. The text of the resolution is below.

Here is the text of the resolution.

A RESOLUTION OF THE MIDDLE AND LOWER SUWANNEE RIVER AND
WITHLACOOCHEE RIVER TASK FORCE FINDING THE CONTINUING AND
REPETITIVE SPILLS OF RAW SEWAGE INTO THE WITHLACOO CHEE RIVER
AND MUD CREEK BY THE CITY OF VALDOSTA, GEORGIA TO BE
UNACCEPTABLE AND INTOLERABLE; REQUESTING MEANINGFUL
ENFORCEMENT ACTION BY THE STATE OF GEORGIA AND FLORIDA STATE
AGENCIES AND PERSONNEL IN POSITION TO BRING SUCH ACTIONS; AND
REQUESTING THE SUPPORT OF THE STATE OF FLORIDA, THE FLORIDA
DEPARTMENT OF ENVIRONMENTAL PROTECTION, THE SUWANNEE RIVER
WATER MANAGEMENT DISTRICT, AND ALL OTHER INTERESTED AGENCIES
IN ADDRESSING THE ISSUE OF RAW SEWAGE SPILLS BY THE CITY OF
VALDOSTA, GEORGIA.

WHEREAS, pursuant to permits issued to the City of Valdosta by the Director of Georgia Environmental Protection Division, the City of Valdosta water pollution control plants are permitted to discharge treated wastewater into with Withlacoochee River and Mud Creek so long as the wastewater is within certain regulatory limits set by Georgia Environmental Protection Division;

WHEREAS, the permits do not permit the discharge or spillage of raw sewage into any waterway;

WHEREAS, the Withlacoochee River and Mud Creek both flow into and contribute to the flow of the Suwannee River, which is both an important ecological and environmental asset and a vital tourism feature of the north central Florida region;

WHEREAS, pollution of the Suwannee River is a matter of great public interest as such pollution negatively impacts the quality of life for our citizens and visitors and threatens both the economic vitality and tourism appeal;

WHEREAS, in spite of the Consent Order, spills ofraw sewage into the Withlacoochee River and Mud Creek have occurred since April 2018, more than five years after the date the City of Valdosta approved its five-year plan;

WHEREAS, it is evident that the Consent Order and the City of Valdosta Five-Year Plan have failed to alleviate the cause or causes of spills of raw sewage into the Suwannee River Basin;

WHEREAS, the North Central Florida Regional Planning Council has appointed the Middle and Lower Suwannee River and Withlacoochee River Task Force, hereinafter referred to as the Task Force, whose membership is comprised of a county commissioner from each of the 12 counties within the north central Florida region, to address the issue ofraw sewage spills by the City of Valdosta into the Withlacoochee River and Mud Creek; and

WHEREAS, it appears to the Middle and Lower Suwannee River and Withlacoochee River Task Force that more immediate and decisive action is necessary to protect north central Florida region natural resources and the Task Force’s interest in maintaining a high quality of life for its citizens and enjoyment of the area for residents and visitors.

NOW, THEREFORE, in consideration of the foregoing, BE IT RESOLVED by the Middle and Lower Suwannee River and Withlacoochee River Task Force that:

RESOLVED this 28th day of February 2019, by the Middle and Lower Suwannee River and Withlacoochee River Task Force in special session.

That GA-EPD Consent Order for Valdosta, as well as all the big Georgia wastewatern permits in the Suwannee River Basin, are on the WWALS website.