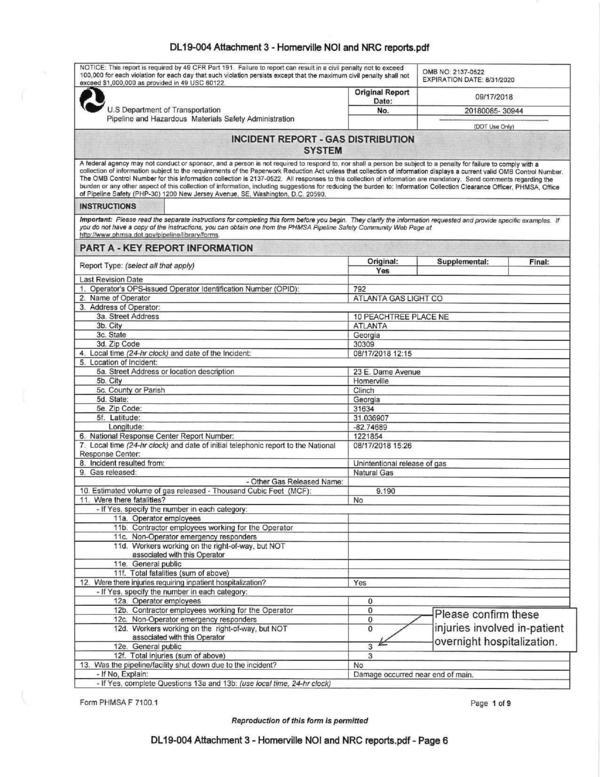 Staff also found that AGLC then used the results of their 3rd-party investigation of the damage as the basis for their initial and 30-day report to PHMSA; however, they have failed to provide any evidence to demonstrate that they have investigated the events which occurred during the time following the damage, up to the point the explosion occurred.

On Page 5 of its PHMSA report, AGL said it did “get prior notification of the excavation activity” via the “One-Call System.” 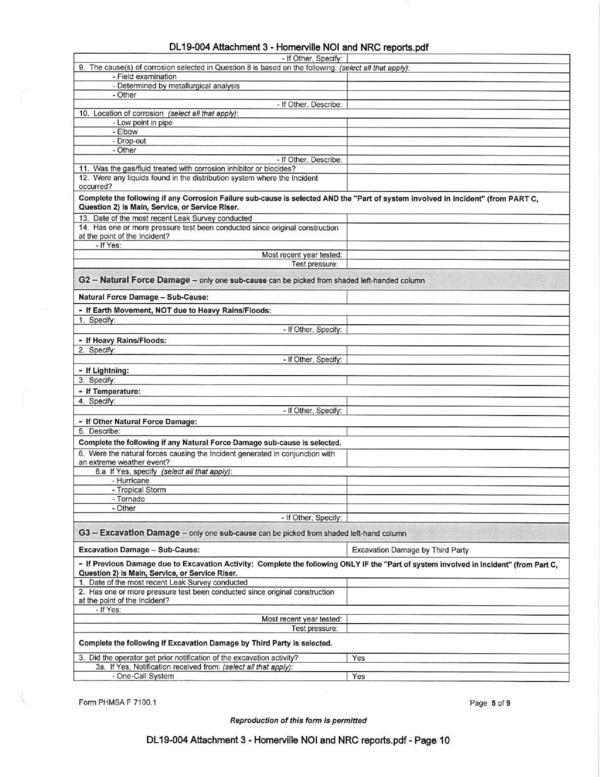 Operator was notified of excavation damage

But on Page 6 for “Root Cause Description” AGL gives “One-Call Notification Practices Not Sufficient”.

Answering “If One-Call Notification Practices Not Sufficient, specify:” AGL wrote “Notification to One-Call Center made, but not sufficient”.

In the narrative at the end of the report, AGL was more explicit: “There was no locate request made for the area where the damage to the gas main occurred.” 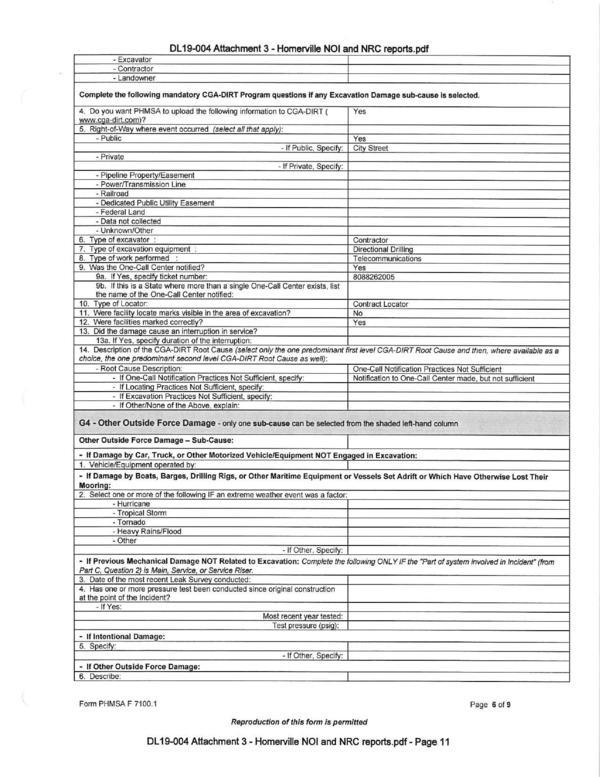 GA-PSC staff did not agree, writing instead: “The USIC investigators claim that the excavator “was boring outside the scope of all locate requests called in for the area” has no basis in fact….“

GA-PSC’s staff further wrote that they looked up AGL’s contractor’s record of responding to locate requests, and found that the contractor was late in responding so many times that staff speculate the contractor might be “masking” a “critical staffing issue”. Further, GA-PSC staff wrote:

USIC is repeatedly failing to perform locates in the required time frame, as required by both AGLC’s procedures, and the state dig law; however, there is no indication that AGLC is aware of this issue, or, if they are aware that they have taken any action to address it.

There is still more along those lines in the GA-PSC report.

On Page 9 of the AGL report to PHMSA:

An excavator (LGM Services LLC.) installing fiber optic communications conduit by directional drilling struck an Atlanta Gas Light Company 2-inch PE 45 psig natural gas main during a bore. An adjacent sewer main was also damaged. The distance between the damage to the gas main and the damage to the sewer main was approximately 4 ft., 6 in. Gas leaking from the 2-inch gas main entered underground sewer facilities through the damaged portion of the sewer main and then traveled to the sewer lateral for the coffee shop located at 23 E. Dame Ave., Homerville, GA. An inspection of the coffee shop revealed an improperly placed P-trap, which is the likely path of entrance of the natural gas into the coffee shop. The gas that entered the coffee shop through the lateral was then ignited by an unknown ignition source. There are no gas facilities going to the coffee shop.

Three (3) individuals in the structure were injured resulting in hospitalization. In addition to the damage to the coffee shop structure itself, two parked vehicles were damaged.

Additional NRC Report Number 1222363 was created for the same event after a 48 hour supplemental call was placed with the NRC. 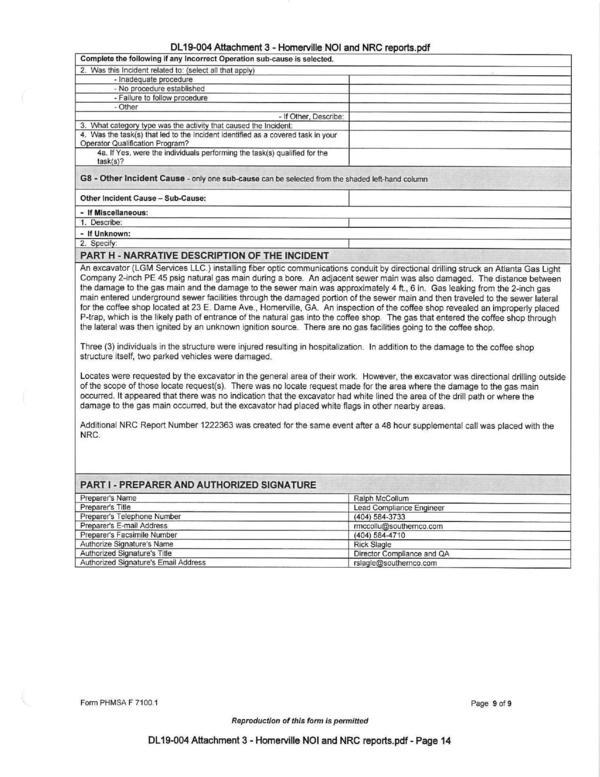 Narrative description of the incident

The long-awaited GA-PSC report contradicts some of this narrative on AGL’s PHMSA report Page 9. For example, GA-PSC’s staff wrote:

Staff found that the Operator did not perform an independent investigation into this third party damage, but allowed their locate contractor, USIC, who performed the locate request to perform their investigation. Staff determined that the failure investigation performed by USIC was fundamentally flawed. The USIC investigators claim that the excavator “was boring outside the scope of all locate requests called in for the area” has no basis in fact, and demonstrates a failure to properly investigate the damage which led to this explosion.

Hm, “no basis in fact” is almost like GA-PSC staff can smell gaslighting.

GA-PSC staff cited failure to investigate properly according to AGL’s own corporate procedures as the reason for their recommended $2,245,000.00 fine. That one plus four smaller fines add up to $2,305,000.00. Soon we should see AGL’s response, and then there may be a public hearing, after which the GA-PSC Commissioners will decide.

I would like to compliment Tom Krause, Public Information Officer, Georgia Public Service Commission, for sending me this AGL PHMSA report a week ago, the day after I requested it. It is gratifying to say a government agency was faster than me in disseminating information.