The Withlacoochee River hasn’t risen like this since The Salty Snapper moved in, which is good, since they’re catering the Final Feast tonight on the Suwannee River in Suwannee County, Florida for the last day of #PaddleGA2019, after we paddle in at the Hal W. Adams Bridge Boat Ramp in Lafayette County. 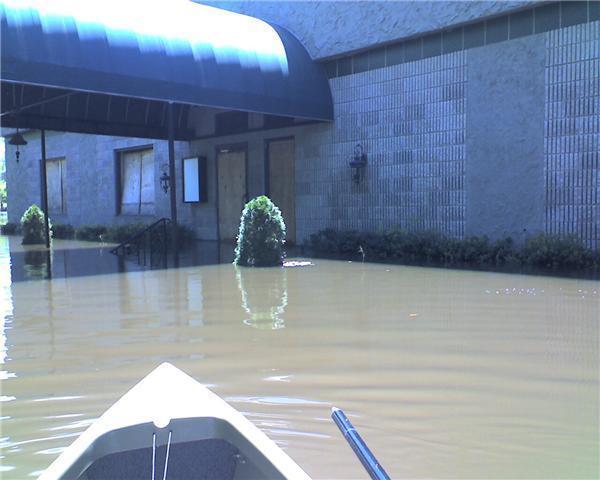 Canoe to the door

The caterer’s building and the 2009 Withlacoochee flood. The original long-running restaurant in the location was JP Muldoons. The Salty Snapper opened in 2015. 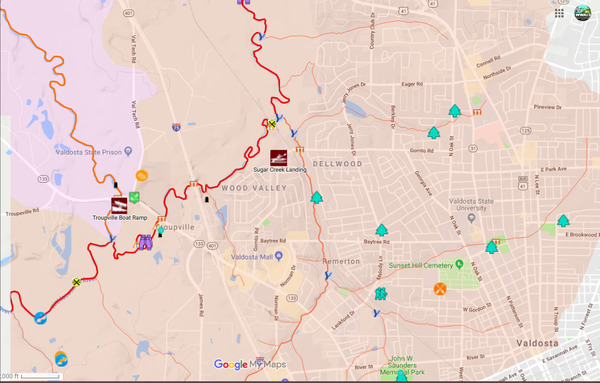 The restaurant is located on Sugar Creek about a mile from the Withlacoochee. 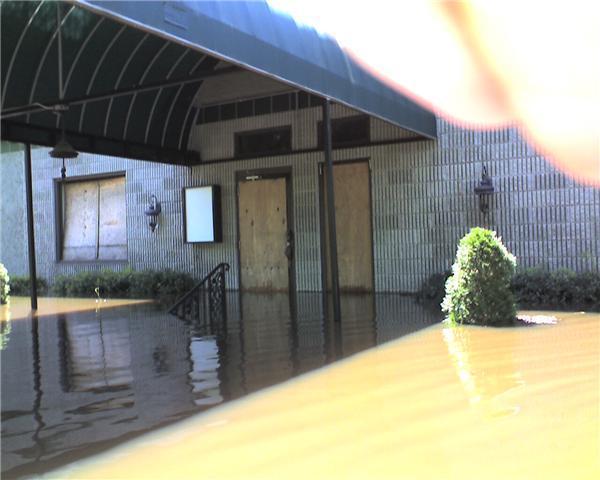 Boarded up and flooded

It is fed by [One] Mile Branch (VSU main campus) and Two Mile Branch (VSU North Campus, Emory-at-Valdosta Junior College 1928-1954.) The branches are closely one and two miles from the courthouse. With the normal Sugar Creek elevation 118′ -120′, in this flood water was about 138′.

The Historical Lowndes County Courthouse is in the center of Valdosta, in the lower right of the map.

For perspective, the entire “Paddle Georgia” Valdosta boat ramp [Troupville Boat Ramp, in the middle left of the map] area and the “Land Between the Rivers” was under water, much of it a depth of eight feet or more.

This was the flood that overwhelmed Valdosta’s Withlacoochee Wastewater Treatment Plant (WWTP, in the lower left of the map), sending raw sewage down the rivers. See Flooding damages Valdosta’s Waste Water Plant, Robin Jedlicka, WALB, April 9, 2009 at 9:48 PM EDT – Updated June 18 at 7:57 AM. The WWTP flooded again in 2013. Because of that and other wastewater issues, the City of Valdosta has spent about $100 million in sanitary sewer system improvements, including building a new WWTP uphill out of the flood plain. Valdosta is hoping for another $40 million from the upcoming Special Local Option Sales Tax (SPLOST) referendum.

I was saying Valdosta had not spilled sewage this year, until this Wednesday, when sewage ran across Ashley Street, the main drag. Valdosta Utilities says they cleaned it up and barricaded the strorm drains, so none of it got into One Mile Branch.

Be that as it may, none of it could get down to where Paddle Georgia is today in less than several days, and it would be diluted to undetectable by then.

Off to paddle on this last day of #PaddleGA2019, and then The Salty Snapper is catering the Final Feast, with Laura D’Alisera playing: she won last year’s Suwannee Riverkeeper Songwriting Contest, songs are coming in for and this year’s finals, August 24, 2019, at The Salty Snapper.

The Salty Snapper is near a landing on the Withlacoochee and Little River Water Trail (WLRWT), and Camp Suwannee of tonight’s Final Feast is on the Suwannee River Water Trail (SRWT). As Helen Tapp revealed on WCTV, we are working up a plan for the WLRWT to gain a River Camp like the five on the SRWT, with hot and cold running water, showers, and raised and screened sleeping platforms.