Donald O. Davis of the Lowndes County Historical Society, and a descendant of one of the early settler families at Journey’s End, writes for the last day of #PaddleGA2019:

In 1866 John H. Polk and his bride, Mary Frances Lewis Polk homesteaded on this bend of the Suwannee just below the now Hal Adams Bridge Boat Ramp. They were both from Withlacoochee Counties, he Lowndes, Ga. and she Hamilton, Fla.

He was severely injured in the Civil War, recovering in prison and never having use of his right arm. She was the second of 5 sisters, at age 13 when her father “did not come home from the War.” His fate was not known to descendants until the 1980s. Lt. Daniel Mills Lewis, killed in action, Gettysburg, July 3, 1863. The Polk’s would have eleven children born 1868 to 1895 inclusive.

The Florida Archives will soon be gifted these and several more like photos as a need was expressed for additional LaFayette County items.

Donald Davis, who was part of the newly named “Troupville Troop” speaking at the “Land Between The Rivers” tent, descends from the 11th child in this family. 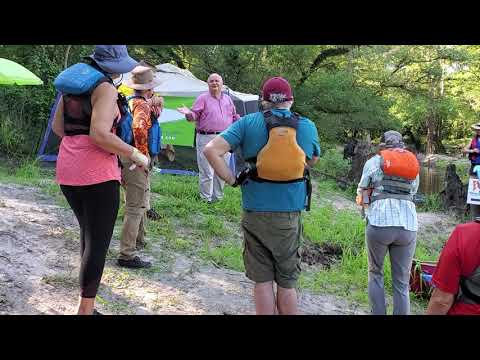