Another letter in the Charlton County Herald, October 23, 2019, same issue as the letter posted previously. You can send your own letter to the editor or comment to the Army Corps or GA-EPD. 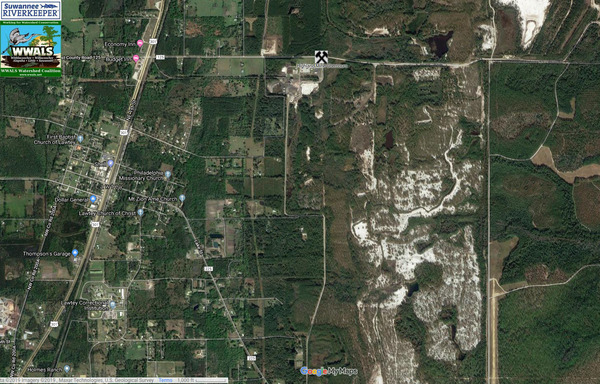 Let me start out by saying that I have not been a part of any protests that have been going on. I don’t think anyone can foresee if the proposed strip mining will actually harm the swamp. We probably won’t know until many years have passed. Only time will truly tell.

However, I can say that the strip mining by Dupont in Bradford County did do a lot of harm to my Grandfather’s strawberry farm! My Grandfather owned a farm that joined Dupont’s property east of Lawtey, Florida. He was very dependent on a fresh water, spring fed creek that ran through his farm. This water was used to irrigate the strawberries. Dupont told the same lies that Twin Pines Minerals is telling us now! They claimed the mining would have NO impact on their neighbors and that the land would be “100% plantable”. 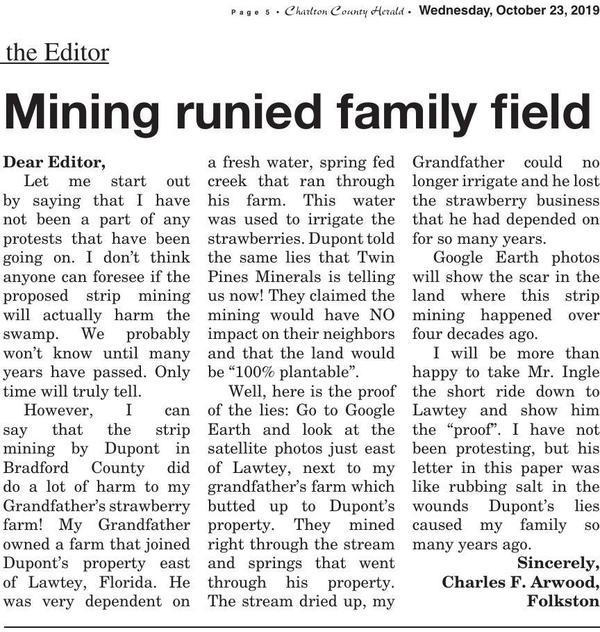 Well, here is the proof of the lies: Go to Google Earth and look at the satellite photos just east of Lawtey, next to my grandfather’s farm which butted up to Dupont’s property. They mined right through the stream and springs that went through his property. The stream dried up, my Grandfather could no longer irrigate and he lost the strawberry business that he had depended on for so many years.

Google Earth photos will show the scar in the land where this strip mining happened over four decades ago.

I will be more than happy to take Mr. Ingle the short ride down to Lawtey and show him the “proof”. I have not been protesting, but his letter in this paper was like rubbing salt in the wounds Dupont’s lies caused my family so many years ago.

Thanks to Christian Hunt for sending an image of the letter.

The DuPont mine Charles F. Arwood refers to is now the Chemours Highland Mine, which is in the middle of a string of Chemours titanium mines up Trail Ridge in north Florida. Chemours and Twin Pines Minerals are under a Florida Consent Order for all four of them. 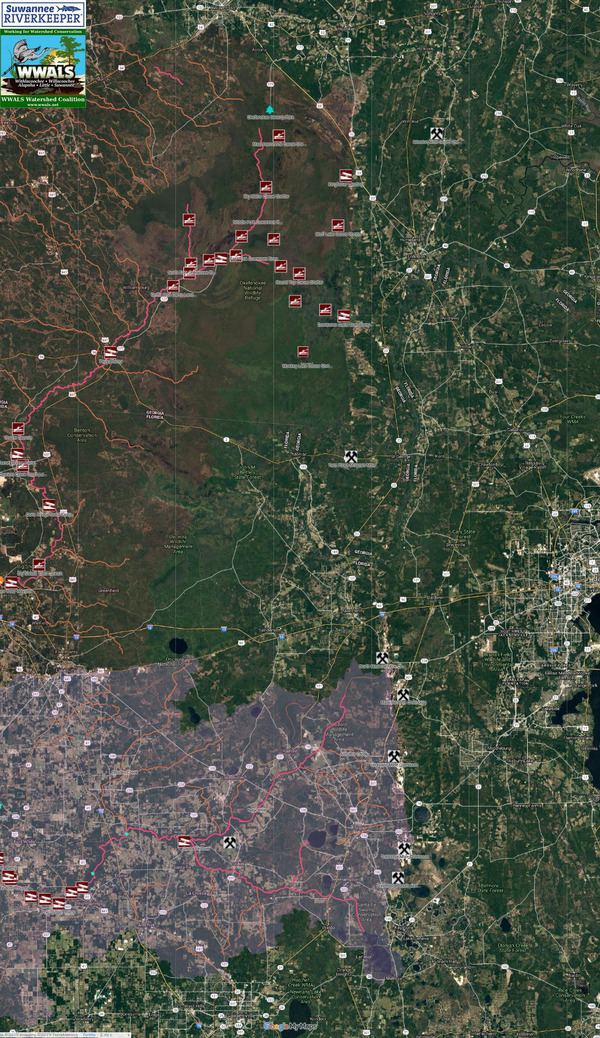 That hasn’t stopped Chemours from applying for a fifth one to the south, the Trail Ridge South Mine. Chemours didn’t answer whether TPM would be involved in that one. But TPM is the applicant for that titanium mine next to the Okefenokee Swamp in Charlton County, Georgia. 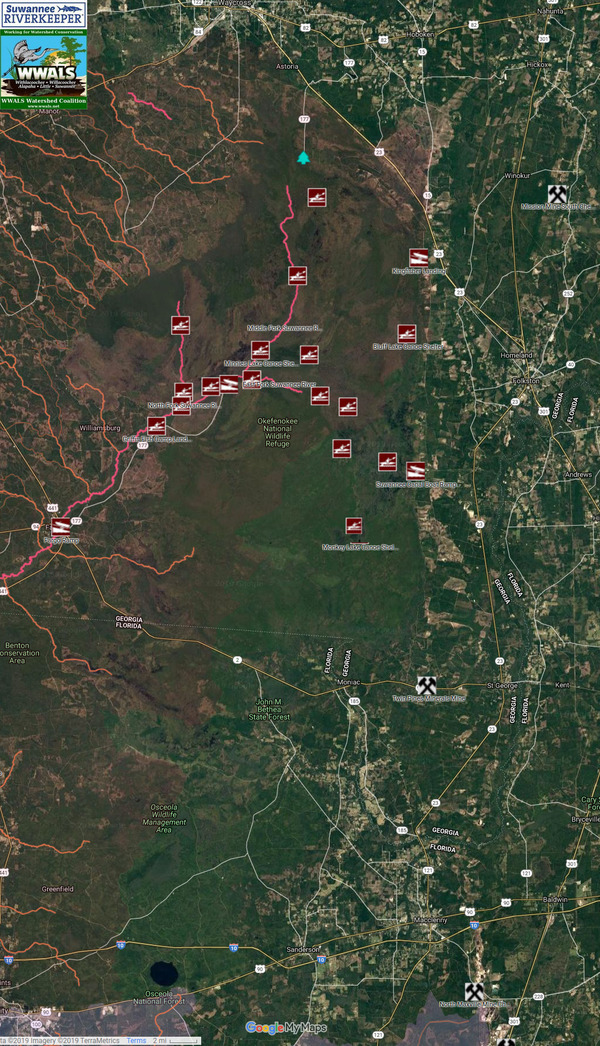 You can send your own letter to: editor@charltonherald.com 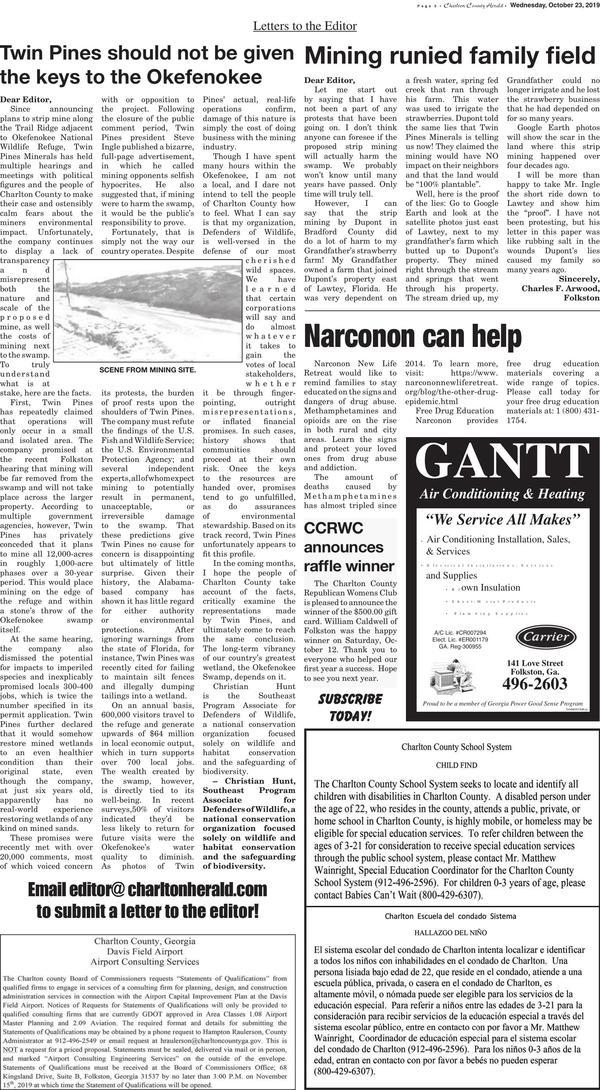 The nominal comment deadline was Thursday, September 12, 2019, but the Corps will not say it will not read comments sent in later, so you can still send in your comments, and post them on social media, as op-eds, etc.