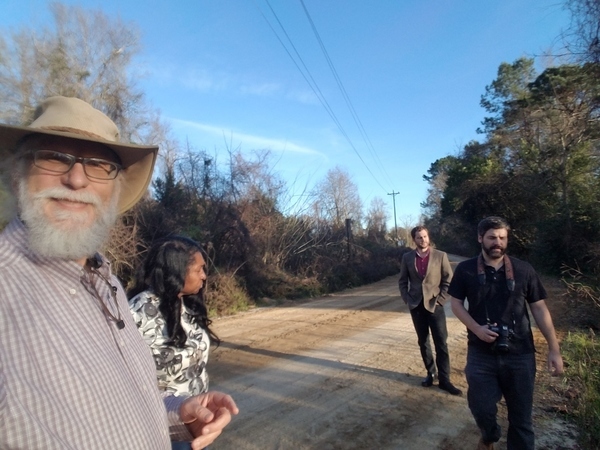 Debra Tann and I were back at Beatty Branch on January 7, 2019, this time with the VDT, about the firefighting chemical issue that was in the Atlanta Journal-Constitution the first week of January. This time it was for local reporters. Moody neighbor wants water tested, END_OF_DOCUMENT_TOKEN_TO_BE_REPLACED That was on the front page of the newspaper of record of the biggest city in the Suwannee RIver Basin. There’s a petition for Georgians to sign, lots of protests in Florida to assist with, and you can help us all watch Sabal Trail to catch their next violation.

Members and demonstrators met in the median of Highway 84 at the Withlacoochee River Bridge to listen to the Georgia Water Coalition’s “Dirty Dozen 2016” conference call.

The “Dirty Dozen” list is an attempt to “put a spotlight on ongoing pollution problems, pending threats to Georgia’s water as well as state and federal policies and failures that ultimately harm — or could harm — Georgia property owners, downstream communities, fish and wildlife, hunters and anglers, and boaters and swimmers,’ according to organizers. END_OF_DOCUMENT_TOKEN_TO_BE_REPLACED