Chris Mericle’s Florida state rep., Elizabeth Porter, who also attended the recent GA EPD briefing to SRWMD about Valdosta’s plans to fix its wastewater overflowes into the Withlacoochee River, just objected to FERC about Sabal Trail’s fracked methane pipeline (PDF). Chris and Deanna Mericle are our local hosts for the WWALS Withlacoochee and Suwannee River paddle past the pipeline 21 September 2014.

Please allow me to introduce myself. I am State Rep. Elizabeth Porter, the representative for House District 10 which includes the counties of Suwannee, Columbia, Hamilton, Baker and Alachua. House District 10 also contains the greatest number of first magnitude springs in Florida, including the world famous Ichetucknee Spring, Ichetucknee, Suwannee, Withlacoochee, Saint Mary’s and Santa Fe rivers.

I write to you today in regard to the proposed Sabal Trail natural gas transmission pipeline. First let me say that I am in full support of an additional transmission line for the state of Florida, as I see it not only as an economic plus, but also as a matter of state security in the event of other pipeline failures or interruptions. I am concerned, however, with the proposed route for the line in regards to the area in which it will cross the Withlacoochee River in Hamilton County.

Though I certainly appreciate Sabal’s willingness to propose an alternate route, the route crossing Hamilton County is unfortunately still in a critically sensitive area. This route would require directional drilling underneath the Withlacoochee River in a highly karstic area known for well-developed sinkholes, underground fracture systems, and multiple spring vents that comprise significant geologic hazards that are highly susceptible to sudden structural collapse. This alternative route crosses these well-documented geologic hazards which pose highly significant potential for pipeline rupture which could cause a catastrophic explosion and/or leakage of hydrocarbons.

Proper due diligence in placement of the proposed Sabal pipeline demands proper consideration of the unique geologic and ecologic conditions. Done properly, Florida can meet its growing demands for energy sources in a safe and responsible manner. I ask you to please consider the unique factors listed above, as well as the importance of these rivers and springs to our residents, both as the environmental jewels that they are, and as extremely important economic contributors to our District and our State. I hope you will guide Sabal Trail Transmission, LLC to locate the transmission line clear of this area where it will still benefit Sabal while protecting the Withlacoochee River basin.

Please feel free to call my office if I can be of any assistance to you, or if I can provide you with any resources you may need.

Elizabeth Porter,
Member of the Florida House of Representatives,
District 10

Rep. Porter submitted a very similar to FERC 15 April 2014 recommending Sabal Trail move off the area near the Ichetucknee River crossing the Santa Fe River, after Sabal Trail allegedly moved off the Ichetucknee River. Perhaps someone should remind her or FERC that the same fragile karst limestone underlies the whole Suwannee River Basin, including the Suwannee River, much of whose residents she represents, and even more the whole Floridan Aquifer, which extends throughout all of Florida plus most of the south Georgia region Sabal Trail wants to invade. As a letter forwarded to FERC by FL-DEP and quoted to FERC by SRWMD notes, Sabal Trail wants to run right through the Florida Springs Protection Area, which is among the most sensitive areas. 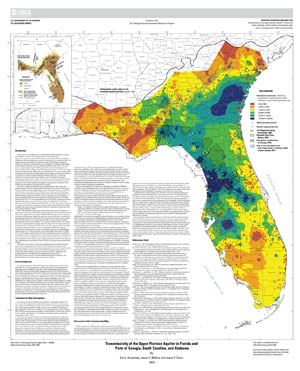 As USGS and Prof. Don Thieme of VSU have pointed out, the area Sabal Trail wants to traverse in and near Lowndes County, Georgia already has leaks from the Withlacoochee River into the aquifer, so disturbances such as pipeline drilling under that river have the same risks in south Georgia as in north Florida.

Also, FPL’s own projections to the Florida Public Service Commission do not support any need for a third pipeline. Even Duke Energy has repeatedly said it doesn’t need Sabal Trail.

According to Sabal Trail’s own figures, it takes half the acreage as their pipeline to generate just as much solar power. So maybe the Sunshine State (and Georgia and Alabama) should stop this unnecessary, environmentally damaging, and hazardous pipeline, and get on with clean, safe, affordable solar power.