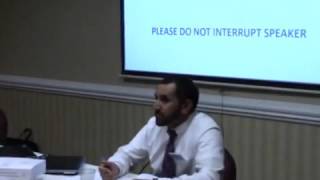 Deborah Johnson of Suwannee County, Fla., spoke of the safety record of Spectra Energy, the parent company of Sabal Trail.

“Spectra Energy has what is considered one of the worst histories of EPA violations concerning spills involving toxins such as PCBs, pipeline mismanagement and more,” Johnson said. “Recently, on May 31, 2015, an explosion of a Spectra Energy pipeline took place in the Arkansas River. Spectra said they would monitor this pipeline 24 hours per day, seven days per week for explosions, ruptures, leaks, etc. They did not even know about the Arkansas pipeline rupture until 24 hours later when a tow boat operator reported the damage to his boat.”

John Quarterman spoke of sinkholes that could result from the construction of Sabal Trail and what it could mean for water wells or water sinks. 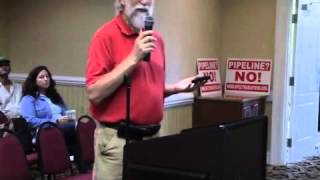 “I’m sure everyone around here has heard of the Shiloh Road sinkhole and the Snake Nation Road Sinkhole that the county had to spend around $500,000 to fix,” Quarterman said. “If the pipeline drilling under the Suwannee River or the Withlacoochee River were to cause a sinkhole, it could have an effect on we don’t really know whose wells or where else.”

John Peconom, FERC project manager for the Southeast Markets Pipelines project, which Sabal is part of, said the meeting was to acquire comments for the environmental impact of the pipeline, potentially to decide if the pipeline is built or not. All comments were recorded by a FERC reporter at the meeting.

You see all the speakers in the LAKE videos of the entire event.