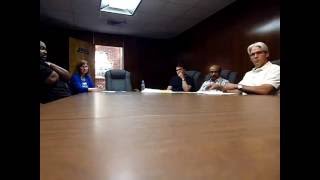 The representatives of the company included Ramesh Mulani (Operations Manager for CR/T), Brian Jones from International Paper (apparently International Paper is responsible for the monitoring of the wells), Carol Northern from EarthCon Consultants, a subcontractor to International Paper and a gentleman whose name I failed to record. Ms. Northern gave a detailed overview of the reasons for the two permit change requests.

Those in attendance asked questions and expressed their concerns about making sure that water in our community and watershed remains drinkable, fishable, swimmable and boatable.

Watch the WWALS video of the meeting: [youtube]http://www.youtube.com/watch?v=KPPE_jeBQwQ[/youtube]

All the permit request materials are in the previous WWALS blog post.