While many Sabal Trail pipeline protesters’ charges have been dropped, at least one, Kaithleen Hernandez, has a court date this Thursday morning, 8AM, at Suwannee County Courthouse in Live Oak, Florida. She says, “We are not outnumbered, we are just outorganized.” 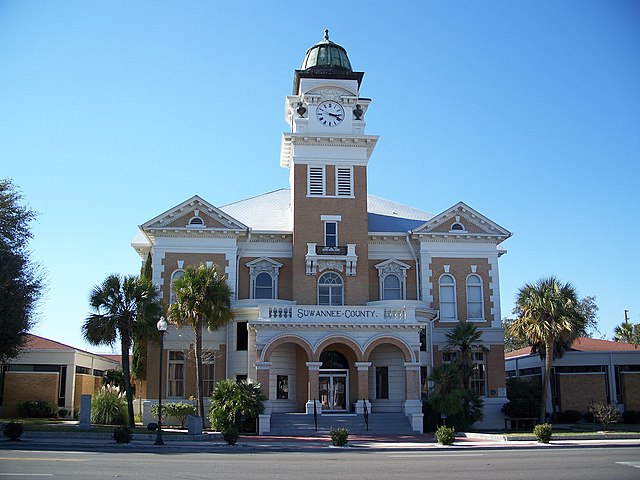 Photo: Ebyabe, Dual-licensed under the GFDL and CC-By-SA-2.5

Kaithleen Hernandez was arrested in 16 January 2017 at the Sabal Trail drill site in Suwannee County, Florida along with Alexa Oropesa for locking on “via arm tubes (or lock boxes) under a truck”. WWALS only does strictly legal work, and was not involved in organizing that lockdown.

Alexa Oropesa and Kathleen Hernandez both plead guilty to misdemeanor charges of trespassing and resisting arrest.

For Alexa Oropesa and Kaithleen Hernandez, the two protesters who locked themselves to the bottom of a Sabal Trail truck, they will face one year probation with 50 hours of community service and a $600 fine.

On 9 June 2017, Hernandez participated in a demonstration in Davenport, Florida, which involved no civil disobedience. Afterwards, Hernandez was picked up by local law enforcement while she was retrieving signs along the roadside.

Apparently the charge coming up Thursday morning is violation of probation; I don’t know the particulars beyond that.

I do know the state of Florida and local law enforcement agencies have spent a lot of time and money defending an invading pipeline that profits companies and executives in Houston, Texas and Calgary, Alberta, Canada at the expense of local landowners, the Florida tourism industry, Georgia, Florida, and Alabama agriculture, and risking our water and our safety. If the Florida Department of Environmental Protection or the U.S. Amry Corps of Engineers had protected our environment, or the Federal Energy Regulatory Commission (FERC) had actually considered that less than half the acreage of Sabal Trail’s pipeline could produce more power through solar panels, there would be no Sabal Trail and there would have been no protesters.

I don’t make a habit of going to courthouses, even for Sabal Trail cases, but this one is in Live Oak about someone who was defending the Suwannee River. I plan to be there, and I invite everyone else to come, on behalf of free speech, the First Amendment, the Suwannee River, and the Floridan Aquifer.

Whatever the charge or the case, Kaithleen Hernandez was protecting our river and our aquifer, I assume it is still perfectly legal to attend her court hearing, so I plan to be there.

And here are things you can do to watch Sabal Trail like a hawk and to stop any further pipelines.