Not named by the map: Tampa Bay Waterkeeper and the new Kissimmee Waterkeeper.

Florida is supposed to be a home rule state, with counties and municipalities having considerable powers to determine local ordinances and policies. Yet the legislature keeps passing pre-emption legislation to stop what local governments are doing.

Perhaps most famously, in 2008 Florida was the first state to pre-empt local plastic bag bans and fees, followed by a polystyrene ban ban. Other examples include smoking and plastic straws.

Some of these statewide ban bans have been set aside by court cases, such as the Coral Gables polystyrene foam foodware case. Plastic straw pre-emption got vetoed by the governor. Even better would be to stop such pre-emption bills before they pass the legislature.

Right now there are bills to pre-empt local Rights of Nature changes to county charters. The timing is probably because such Bills of Rights for Nature have blossomed from one nine months ago, Santa Fe Bill of Rights (SAFEBOR), to a dozen now. 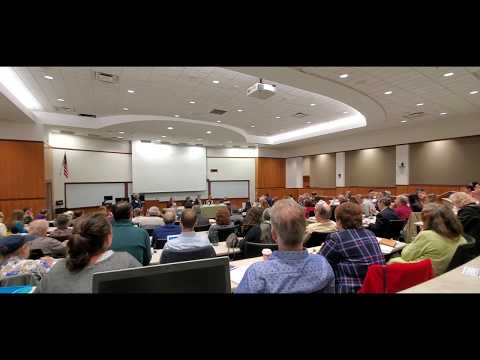 Last Saturday a first-ever Florida Rights of Nature Convention at the UFL Levin School of Law was standing-room-only, with speakers from Pittsburgh, which passed the first-ever fracking ban, and Colombia, where the Colombian Supreme Court recently recognized rights of the Amazon region including protection from deforestation and a duty of the national State to protect, conserve, maintain, and restore it, as well as speakers from the local Florida Rights of Nature movements.

Longtime proponent of Rights of Nature, Thomas Linzey, declared Florida the leading edge of the movement worldwide. A movement to change the legal status of rivers, swamps, spings, aquifers, and whole ecologies from commodities to be exploited to subjects in their own rights and part of the community along with humans.

The next day the local movements formed the Florida Rights of Nature Network FRONN), with a board, officers, and legal representation to challenge any statewide pre-emption attempt.

This movement for Rights of Nature may be as significant as the U.N. Declaration of the Rights of Man. Or more likely more significant, since these are not just declarations; these are legal changes to city, county, state, and national charters and constitutions. People with FRONN would be happy to explain further to anyone interested.

In Gainesville at their board meeting on Friday, February 7, 2020, Waterkeepers Florida decided to oppose any such pre-emption of local environmental measures, for any or all of the above topics or others. WKFL Chair Lisa Rinaman announced that decision at a panel afterwards.

The actual motion a week later is the concrete wording of that decision. It was drafted by Kelly Cox, attorney for Miami Waterkeeper.

This approach avoids having to dissect individual bills. One of the bills in the legislature right now has good parts in addition to a ban on local Rights of Nature charter changes. And similar pre-emption measures may pop up at any time in other bills.

A similar measure is contained in Senate Bill 1382 — sponsored by Sen. Ben Albritton, R-Wauchula. But the legislation goes further in adding more programs that make taxpayers continue footing the bill for cleaning up agricultural pollution.

State laws that preempt local governments and citizens from protecting their communities are nothing new for the Legislature . A total of 119 bills that contain some form of state preemption of local governments were filed from 2017 to 2019, according to a recent report from the nonpartisan group Integrity Florida.

In his State of the State speech Tuesday, DeSantis said he would continue a “bold approach to protecting our natural resources.” DeSantis deserves credit for doing more to protect the environment than his predecessor, Rick Scott, but Scott was completely negligent in the job.

The editorial notes Sierra Club gave the current Florida governor a D for his 2019 environmental grade, partly because of signing the notorious toll roads bill.

Initiatives such as SAFEBOR are simply a reaction to the state’s failure to fulfill such basic duties as preventing the groundwater that provides our drinking water supply and flows through springs from being pumped beyond a sustainable level and polluted.

If DeSantis and the Legislature won’t do their job in protecting Florida’s natural environment, they shouldn’t stand in the way of local citizens seeking to do it for them.

Waterkeepers Florida is for citizens being able to protect nature.