Add that many WWALS members, some pictured here on the Suwannee River 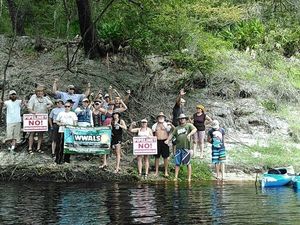 at the proposed Sabal Trail crossing, live in Florida, and this article from that same day is a good summary of the situation a week ago. It was also picked up by Bakken.com, “Powered by Shale Plays Media”.

A South Georgia environmental group hopes to block a Florida permit for the Sabal Trail Transmission natural gas pipeline over a series of concerns about possible harm to springs and rivers, the destruction of wetlands, the safety record of the company building the pipeline and Gov. Rick Scott’s reported financial stake in the firm.

On Aug. 7, the WWALS Watershed Coalition — an advocacy group focused on the Withlacoochee, Willacoochee, Alapaha, Little and Upper Suwannee rivers in Georgia and Florida — filed a petition seeking to get a case before an administrative law judge challenging the Florida Department of Environmental Protection’s decision to grant an environmental resource permit for the project and the pending decision to allow construction of the pipeline across the state’s “sovereign submerged lands” and under four rivers, including the Suwannee and Santa Fe. The company will pay the state $129,851.35 for a public easement to construct the pipeline.

Late Friday, the FDEP press office said the department’s Office of General Counsel was “currently reviewing the petition for sufficiency” and has not yet decided whether to allow the challenge to go to the Division of Administrative Hearings.

The article continues with some background on the pipeline.

DEP officials and the Suwannee River Water Management District had a more cautious tone in written comments to the federal government in 2014, saying the pipeline could possibly lead to petroleum liquid contamination of the aquifer when “much of the route” passes through vulnerable, karst areas of the aquifer. In those comments, state officials also raised the possibility of sinkholes and the redirection of groundwater that might reduce flow to springs and rivers.

In response to questions about the decision to approve the permit after expressing concerns about the potential environmental impact of the pipeline last year, the DEP issued a written statement via email saying “approval of a permit is based on the determination that the application meets all requirements under Florida law and the applicant has demonstrated reasonable assurance that the State’s wetlands and water resources will be protected.”

Spectra spokeswoman Andrea Grover said the company has conducted extensive civil and environmental surveying since 2012 and rerouted the planned pipeline where possible to avoid karst areas that might be more prone to sinkholes and damage to the aquifer. In May, the company announced it was moving the planned pipeline crossing beneath the bed of Santa Fe River farther west — and away from the Ichetucknee River to an existing Florida Gas Transmission pipeline corridor — to avoid an area deemed more susceptible to sinkholes.

Grover also said the permit would require “full mitigation” of impacts on wetlands.

In a phone interview from his Lowndes County, Georgia home, John S. Quarterman, the president of WWALS, said the pipeline was an “unnecessary, destructive and hazardous” project planned across one of the most sensitive areas of the Floridan aquifer.

In this area, the environmental group Our Santa Fe River Inc. is not part of the challenge but does support it, said Merrillee Malwitz-Jipson, the organization’s former president.

The article continues with some material about Spectra’s record of safety problems, including the July 14th Canadian NEB order, some PHMSA fines, etc., plus a ritual response from Andrea Grover about how Spectra is supposedly continually improving. Nevermind the same kinds of problems of negligence, corrosion, leaks, and explosions have continued for three decades now.

Curry got a quote from a spokeswoman for Florida Gov. Rick Scott, claiming the governor knew nothing about what was in his blind trust and that such trusts “protects the public from any conflict of interest.” See yesterday’s Florida Bulldog followup story for how there’s some reason to doubt both of those assertions.

You can support this work by becoming a WWALS member today!