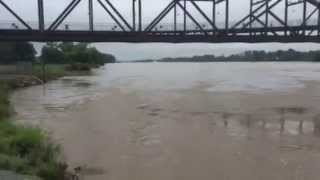 The company behind that ruptured pipeline? None other than Spectra Energy, the firm that Florida’s Department of Environmental Protection — which is personally overseen by Scott — is backing to build the Sable Trail project through Florida.

Environmentalists have already sounded the alarms. The WWALS Watershed Coalition, a group based in southern Georgia, has filed a legal petition challenging the deal.

“The Sabal Trail pipeline’s path… would require boring underground pipelines beneath the Withlacoochee, Flint, and Chattahoochee rivers as well as numerous smaller streams and will course underground above the Floridan aquifer,” says the WWALS Watershed Coalition. “While the Sabal Trail pipeline’s parent companies would have residents believe their three-foot-diameter pipe is a benign neighbor, the history of gas pipeline accidents and environmental ills paints a different picture.”

So why would DEP support a project like this? There’s no clear answer from the state, but Florida Bulldog went digging through Scott’s financial disclosures and found that last year the governor reported owning a $108,000 stake in Spectra and its affiliates. (His most recent form doesn’t include any stake in the company because those investments were moved to a blind trust.)

See FL Gov. Scott’s blind trust isn’t opaque for why there’s some doubt about that last.

Meanwhile, FL-DEP denied the WWALS petition last Friday on technicalities, but gave us 14 days to amend.