Yep, we created a Florida subsidiary, and lots of new members joined WWALS in order to get listed in the amended petition (PDF). 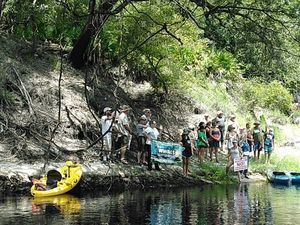 Two weeks after the Florida Department of Environmental Protection rejected a Georgia group’s petition to challenge a DEP permit for the Sabal Trail natural gas pipeline, the WWALS Watershed Coalition — an advocacy group focused on the Withlacoochee, Willacoochee, Alapaha, Little and Upper Suwannee rivers in Georgia and Florida — has filed another petition.

The DEP general counsel will now review this petition and decide whether to allow it to proceed to the state Division of Administrative Hearings.

The story notes DEP claimed WWALS hadn’t dotted enough is and crossed enough ts, but now we have:

In the fresh challenge filed Friday, WWALS officials noted that they incorporated a Florida-based nonprofit on Aug. 23 and that 36 of the parent organization’s members live in Florida, including Hamilton and Suwannee counties, two counties through which the pipeline is planned to run.

In this area of the state, the environmental organization Our Santa Fe River Inc. is not part of the challenge, but a group representative says they support WWALS.

The story mentions Sabal Trail wants to gouge under the Suwannee and Santa Fe Rivers.

The petition raised concerns over deforestation, wetlands destruction and pointed to the area’s karst geology, where the limestone is characterized by sinks and underground streams. In the petition, WWALS said underground drilling may lead to sinkholes and impact the flow and water quality of springs and rivers. In the petition and in a prior phone interview, WWALS President John S. Quarterman also pointed to some past incidents in Spectra’s safety record.

In June, a Spectra pipeline under the Arkansas River ruptured, releasing nearly 4 million cubic feet of natural gas. In December 2012, U.S. Department of Transportation Pipeline and Hazardous Materials Administration Office of Pipeline Safety fined Spectra $134,000 after an inspection of that more than 9,000 mile pipeline revealed violations that included not checking removed sections of pipe for corrosion.

The story ends by saying FERC “ultimately” will decide. But the pipeline still can’t be built without numerous state permits.