And it turns out that technicality may actually be in WWALS’ favor; stay tuned. 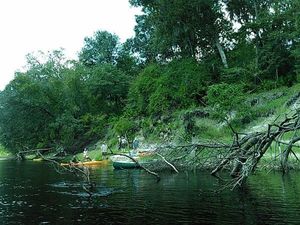 In a statement sent out Thursday, WWALS alleged that the DEP ignored legitimate environmental concerns to dismiss the challenge on a “technicality.”

“WWALS and WWALS-FL continue to point out the obvious: Spectra Energy’s proposed Sabal Trail fracked methane pipeline is not in the public interest, would interfere with property rights far beyond the crossing of the Suwannee River, would not maintain natural conditions, and could have severe adverse effects on fish, wildlife, public recreation, and navigation, especially if it blew up like a Spectra Energy pipeline did in May under the Arkansas River.”

Sabal Trail is planned as a $3.2 billion, 515-mile, three-foot-wide pipeline that will carry up to 1 billion cubic feet of natural gas a day from Alabama through south Georgia and a dozen Florida counties, including Alachua, Gilchrist, Suwannee, Levy and Marion, to a connector pipeline in Osceola County. The pipeline will provide natural gas for a Florida Power & Light electric generation and a Duke Energy plant in Citrus County.

It will cross under several rivers, including the Suwannee and Santa Fe.

The pipeline is a joint venture between FPL parent company NextEra, Duke and Spectra Energy Corp, the Houston, Texas company that will design, build and operate the pipeline.

The state rejected environmental concerns about drilling a pipeline through vulnerable, karst areas of the aquifer, the potential negative impact to the water quality and flow of river and springs from that drilling, deforestation and destruction of wetlands that may take more than 50 years to restore.

The DEP order also stated that concerns about diminished property values, higher insurance rates, the impact to eco-tourism in the area and a potential conflict of interest were “not material facts” in a challenge to a DEP permit.

The conflict of interest allegation said Gov. Rick Scott should not participate in a decision about running the pipeline across state lands — the governor and Cabinet serve as the board of trustees of Florida’s Internal Improvement Fund — because Scott has an investment interest in Spectra.