WWALS members Deanna and Chris Mericle won an award for their activism against the Sabal Trail pipeline at the December 1st 2016 meeting of the Suwannee-St Johns Sierra Club Group. 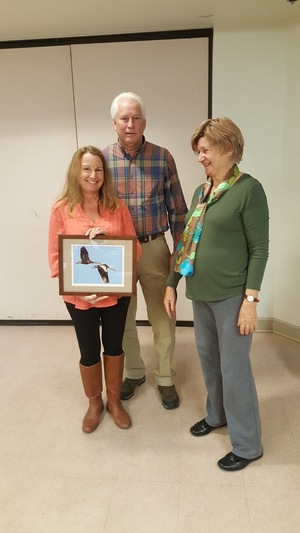 Congratulations to the following individuals who are being recognized with Chapter awards:

Cypress Award, Chris and Deanna Mericle, Suwannee St. Johns Group The couple is being honored for their diligent work to expose the faulty documentation of the Sabal Trail Pipeline LLC. Through their efforts, much information on the dangerous pipeline was brought to the attention of elected officials and the public.

The Mericles were the prime movers in getting Sabal Trail to move off the Withlacoochee River in Florida. In August 2014 Chris Mericle told the Hamilton BOCC he was trying not to be emotional.

“But it is emotional,” said Mericle. “My daughters are six-generation Floridians. They grew up in that river and swimming in those springs, and I know you all have got similar experiences. I’d like to see future generations of our kids be able to enjoy what we have. If we’re not going to protect these springs and this river, who is?” he asked.

They continued trying to stop Sabal Trail from crossing other rivers, especially the Withlacoochee River in Georgia and the Suwannee River in Florida, and out of the Floridan Aquifer.


Sabal Trail is off the Withlacoochee River in FL, now get it off the Suwannee River and the Floridan Aquifer
—Deanna Mericle @ FERC Scoping Meeting, Lake City, Florida
Video by John S. Quarterman for Lowndes Area Knowledge Exchange, 2015-10-01

“As time has gone by, I realized that the same fragile limestone geology and springs that were at risk from the pipeline on the Withlacoochee River are still at risk at the other river crossings. People like me have stood up in front of you and reminded you that the citizens in these counties that the pipeline will go through will get no benefit from this pipeline, and yet they are the ones that will bear the consequences of water and spring degradation, explosions, and sinkholes, that the pipeline is likely to cause.”

Deanna Mericle wrote the first draft of the petition from WWALS to try to stop the main Florida water permits for Sabal Trail, launching what became a four-month legal case with a three-day hearing in Jasper, Florida. We did not win WWALS v Sabal Trail & FDEP, but the evidence, transcripts, and WWALS videos from that case show what FDEP said would not happen and we now see it is happening, including a frac-out of drilling mud into the Withlacoochee River in Georgia and a sinkhole at the drilling site, plus multiple sinkholes in Florida, including two in public roads.

“Someone has got to stand up for the earth and for clean water.”

PS: More about the Sabal “Sinkhole” Trail pipeline boondoggle and how you can help the rapidly increasing numbers of people and organizations that oppose it.