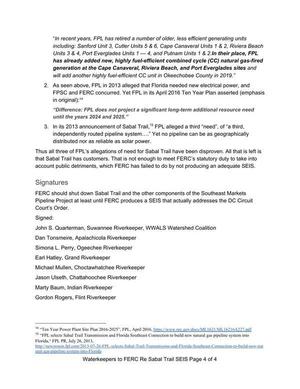 From: The undersigned Waterkeepers

“The orders under review are vacated and remanded to FERC for the preparation of an environmental impact statement that is consistent with this opinion.“

The draft SEIS issued by FERC is clearly not consistent with the court’s opinion for the following reasons:

Beyond rejecting the SEIS, FERC should shut down Sabal Trail and the DC Circuit Court should issue a mandate permanently revoking all the FERC Orders for SMPP, because the “need” alleged by FPL in 2013 has been disproven.

Thus all three of FPL’s allegations of need for Sabal Trail have been disproven. All that is left is that Sabal Trail has customers. That is not enough to meet FERC’s statutory duty to take into account public detriments, which FERC has failed to do by not producing an adequate SEIS.

FERC should shut down Sabal Trail and the other components of the Southeast Markets Pipeline Project at least until FERC produces a SEIS that actually addresses the DC Circuit Court’s Order.