Both houses of the Georgia General Assembly have passed a bill to regulate PFAS fluorinated firefighting chemicals, such as spilled at Moody Air Force Base and the other two Georgia AF bases. If the governor signs it, this bill will become law. 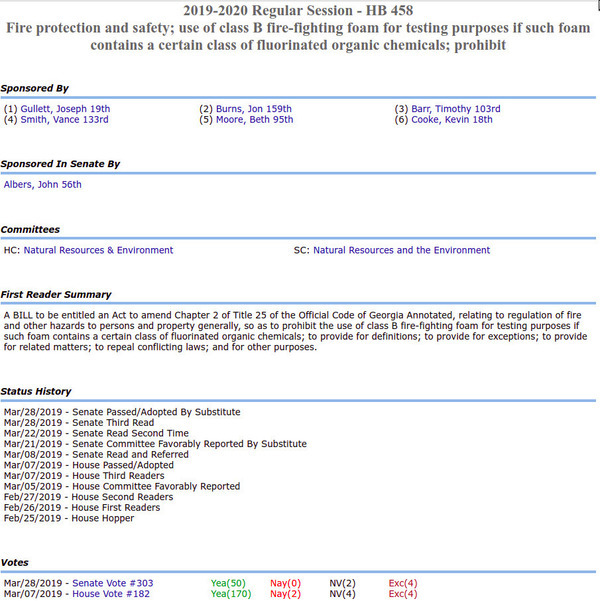 The bill is rather limited in scope, basically only preventing the use of the chemicals except in response to an actual emergency or in a testing facility that contains the chemicals. So other testing or training will be prohibited from using PFAS, starting January 1st of next year. The bill explicitly says it does not restrict manufacture, sale, or distribution of the chemicals.

Practically speaking, that means firefighting equipment testing and training would need to either use non-PFAS firefighting foam or be conducted at an engineered testing location.

This could be problematic for commercial airports that have to follow Federal Aviation Administration (FAA) requirements, which include using a PFAS-containing aqueous film forming foam (AFFF) for firefighting. In federal legislation passed at the end of last year, the FAA is required to have a fluorine-free AFFF option, but they have three years to meet this requirement.

The FAA only recently authorized limited equipment calibration procedures that do not require PFAS-containing AFFF. Similar legislation in other states often excludes commercial airports and refineries, but Georgia’s proposed legislation does not exempt such facilities (unless the FAA-required training and testing is conducted at an engineered facility).

So it looks like some of the next steps need to be in Congress or in FAA rule-making. But Georgia could go ahead and authorize and fund well water and groundwater testing to detect these chemicals, as well as authorize and fund means of ameliorating them, ranging from water filters to withdrawal wells.

Next year, I suppose, since today is Sine Die, the last day of the Georgia state legislative session, when they adjourn with no day to resume for this session. At least they made a start this year.

Here is the text of the bill:

The Senate Committee on Natural Resources and the Environment offered the following substitute to HB 458:

A BILL TO BE ENTITLED
AN ACT

1 To amend Chapter 2 of Title 25 of the Official Code of Georgia Annotated, relating to
2 regulation of fire and other hazards to persons and property generally, so as to prohibit the
3 use of class B fire-fighting foam for testing purposes if such foam contains a certain class of
4 fluorinated organic chemicals; to provide for definitions; to provide for exceptions; to
5 provide for related matters; to repeal conflicting laws; and for other purposes.

6 BE IT ENACTED BY THE GENERAL ASSEMBLY OF GEORGIA:

35 SECTION 2.
36 All laws and parts of laws in conflict with this Act are repealed