Yesterday, the Chair of Waterkeepers Florida received a resolution sponsored by Florida Agriculture Commissioner Nicole “Nikki” Fried and “signed by Governor DeSantis and the full Cabinet, recognizing the month of April as Water Conservation Month in Florida.” This is a good thing, but we should keep our eyes open about Florida’s current cabinet.

“On behalf of Waterkeepers Florida, we thank Commissioner Fried, Governor DeSantis and the Florida Cabinet for designating April as Water Conservation Month. Water conservation is critical to the work we do to protect and restore Florida’s waters. We applaud this resolution and the Cabinet’s commitment to conserving Florida’s waters and the opportunity to partner with our leaders to protect our waters for future generations,” said Lisa Rinaman, St. Johns Riverkeeper.

Special thank you to Florida’s Agriculture and Consumer Services Commissioner, Nikki Fried, for creating the Resolution and inviting us to join in its passing at the Capitol!

Lisa Rinaman, your St. Johns Riverkeeper, was invited to receive the Resolution on behalf of all 13 Florida Waterkeepers. We’re honored to be a part of a Resolution that recognizes the importance of water quality and quantity and calls upon every Floridian to help protect this precious resource. 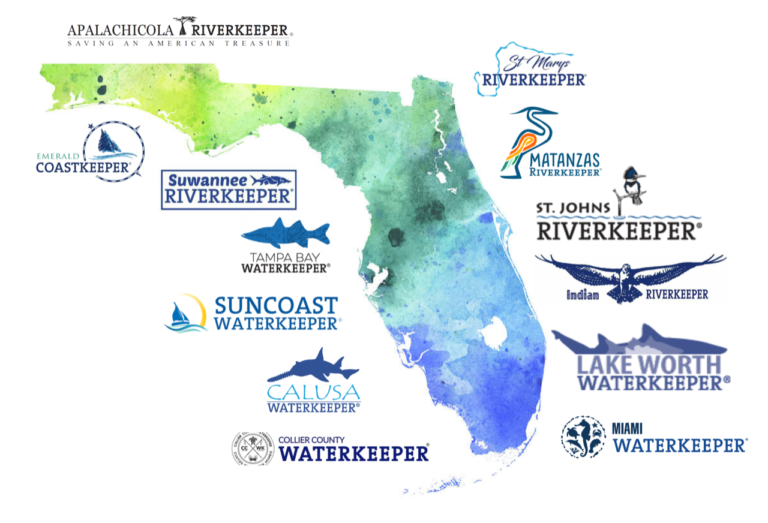 The resolution itself is nothing new. Suwannee River Water Management District (SRWMD) proclaims Water Conservation Month every year, and recommends local governments within its boundaries to adopt a similar proclamation. Even the previous Governor, Rick Scott, not exactly known as a conservationist, used to recognize April as Water Conservation Month. This Month was first proclaimed in 1998, so it’s a 21-year tradition this year.

But the new part is that the Chair of Waterkeepers Florida was invited to receive the resolution from the governor and cabinet.

Recently, a state judge denied standing for Waterkeepers Florida to file an amicus curiae. What do you think now, judge, that you see our Chair standing next to the Governor?

Following that resolution, Commissioner Fried issued a proclamation calling on state lawmakers to halt the expansion of oil drilling in the Florida Everglades, and prohibit hydraulic fracturing, matrix acidizing, and other forms of fossil fuel exploration throughout the state.

“Water is the lifeblood of our state. The Everglades is one of the world’s most unique ecosystems. Together, they are invaluable resources that we have a moral imperative to preserve for future generations,” said Commissioner Nikki Fried.“Expanding fossil fuel exploration in the Everglades and throughout Florida is a threat to the clean water on which life, agriculture, and industry in Florida rely. I hope that our state lawmakers will help lead the way in protecting our Everglades and clean water from drilling and fracking.”

Last month, Florida’s First District Court of Appeals overturned the Florida Department of Environmental Protection’s decision to deny a permit to drill an exploratory oil well in the Everglades, just six miles from the city of Miramar. Commissioner Fried called that decision “infuriating.” Studies by Duke University, the EPA, and others have shown thousands of spills attributed to drilling and fracking operations in recent years.

Commissioner Fried presented the proclamation to Deborah L. Foote, Government Affairs and Political Director of Sierra Club Florida, and Aliki Moncrief, Executive Director of Florida Conservation Voters. Read the proclamation calling for a prohibition on fracking and the expansion of oil-drilling in the Everglades here.

“Florida Conservation Voters is honored to receive this prestigious recognition from Commissioner Nikki Fried and the Department of Agriculture and Consumer Services. It is so valuable for the people of Florida to know that they have an ally on the Cabinet who will oppose expanded oil and gas drilling in the Everglades,” said Aliki Moncrief, Florida Conservation Voters. “In an age of climate change and sea level rise, our focus should be on reducing our reliance on dirty fossil fuels and expanding access to clean, renewable energy options. Commissioner Fried’s leadership on this important issue is invaluable. FCV would like to thank her and the thousands of her staff who work tirelessly every day to keep our food and water clean, our forests healthy and vibrant, and our state such a wonderful place to live.”

“Sierra Club Florida applauds Commissioner Fried’s opposition to any further exploration or drilling for oil and gas in our beloved River of Grass. We can’t afford to put at risk all the investments the public has made to restore the Everglades. Florida stands at a crossroads and it must choose the path towards a clean energy future. It must send a resounding message: Not Here, Not Now, Not Everglades,” said Deborah L. Foote, Sierra Club Florida.

Here is a transcription of the PDF found on the FL DACS dropbox.

WHEREAS, water is a basic and essential need and critical issue facing Florida as it strives to maintain economic prosperity through residential growth, tourism, agriculture and construction; and

WHEREAS, demands on natural supplies of fresh water to meet the needs of a growing population and the needs of the environment, agriculture and industry will continue to increase; and

WHEREAS, all water users including agricultural, industrial, hospitality and other commercial, institutional, and private citizens can contribute to conserving Florida’s water resources; and

WHEREAS, the FSAWWA, in partnership with the Florida Department of Environmental Protection, Florida’s water management districts, Florida Water Environment Association, Florida Rural Water Association and Florida Public Service Commission, is committed to the development and implementation of statewide water use efficiency guidelines and policies; and

WHEREAS, over 200 water utilities and other entities in Florida annually designate April, typically a dry month when water demands are most acute, as Water Conservation Month, to educate the public about efficient use of precious water resources and supplies; and

WHEREAS, proclaiming Water Conservation Month in Florida will assist in increasing awareness and prompting action to make efficient use of our state’s precious water resources.

NOW, THEREFORE, BE IT RESOLVED that the Governor and Cabinet of the State of Florida do hereby designate the month of April 2019, as WATER CONSERVATION MONTH in the State of Florida and call upon each citizen and business to help protect our precious resource by practicing water saving measures and becoming more water efficient.

Here is a transcription of the PDF found on the FL DACS dropbox.

Proclamation: Fracking & Oil-Drilling in the Everglades

WHEREAS, the Florida Everglades is one of the world’s most unique ecosystems, having been designated as a World Heritage Site and a Wetland of International Significance; and

WHEREAS, the Everglades is home to twenty-three endangered and threatened species, is the largest designated wilderness in the eastern United States, and is the only subtropical preserve on the North American continent; and

WHEREAS, the Everglades is the predominant water recharge area for the entirety of South Florida, an area populated by more than 7 million residents, the fourth most populous urban concentration in the United States; and

WHEREAS, water is the lifeblood of Florida, access to clean water is a matter of significant public concern, and the endangerment of water sources would constitute a public health crisis; and

WHEREAS, the practices of oil drilling, hydraulic fracturing, matrix acidizing, and other forms of fossil fuel exploration pose a clear and demonstrated threat to the environments in which they take place, having resulted in thousands of spills of millions of gallons of fossil fuels and byproducts just since 2000, with toxic contaminants from spills persisting for years; and

WHEREAS, the threat to clean water sources on which the lives of Floridians rely, as well as the threat to agriculture and Florida’s environment, outweighs the minimal potential returns from energy exploration in the Florida Everglades;

NOW, THEREFORE, I, Nicole Fried, Commissioner of Agriculture for the State of Florida, do hereby encourage Florida legislators to prohibit fracking-related practices throughout Florida, to prohibit the expansion of oil drilling in the Florida Everglades, and to preserve the Florida Everglades as a source of clean water on which agriculture, biodiversity, and human life in Florida relies.

A Gain of Salt

Florida Attorney General Jimmy Patronis is a grain of salt to take with the apparent conservationism of the current Florida cabinet.

Patronis, as a member of the Florida statehouse, in 2013 proposed a bill (HB 999) that passed and was signed by then-governor Rick Scott that added to state law: “Projects to construct interstate natural gas pipelines subject to certification by the Federal Energy Regulatory Commission are eligible for the expedited permitting process.” FL HB 999 (2013) is why we got an expedited hearing with WWALS vs. Sabal Trail & FDEP (2015).

Before it passed, Sierra Club Florida called HB 999 “Major Threat to Environment”, noting the above as just one among many bad provisions in it that adversely affect the good words in the Water Conservation Month resolution:

(2) Creates wetland exemptions for drainage districts and jeopardizes over 1 million acres of land and water in Florida;

(3) Ratifies no-bid 30 year sugar leases in the Everglades Agricultural Area, increasing the cost of Everglades restoration and further degrading water quality in the Everglades (The intent of this provision is to stop the Florida Wildlife Federation’s legal challenge of the harmful leases);

(5) Limits how the Florida Department of Environmental Protection can test for polluted water discharges;

(7) Restricts how local governments deal with development proposals by limiting how many times additional information can be requested.

BMAPs, water budget, Everglades restoration, containing sprawl, even water quality testing: “ The department may not use the results from a field procedure or laboratory method to make such a finding [that the proposed discharge will reduce the quality of the receiving waters below the classification established for them], or determine facility compliance unless the field procedure or laboratory method has been adopted by rule or noticed and approved by department order pursuant to department rule.” HB 999 made all these things more difficult, and Jimmy Patronis was that bill’s sponsor.

In October 2014, as Patronis was term-limited from the legislature, Scott appointed Patronis to the Florida Public Service Commission for a four-year term. Patronis was on FPSC while FPL’s request for a rate hike for Sabal Trail (FPSC Docket 20160021) was active. His name is on the 15 December 2016 ORDER APPROVING SETTLEMENT AGREEMENT (Order No. PSC-16-0560-AS-EI). p> On 25 June 2017, Patronis was appointed by Scott to the uncompleted term of Jeff Atwater, who resigned as Chief Financial Officer to take a similar position at Florida Atlantic University. Patronis ran for the same office in 2018, and won.

So Florida’s Chief Financial Officer as a Florida Representative as a Florida Public Service Commissioner helped Rick Scott quite a bit in foisting the Sabal Trail fracked methane pipeline on us all.

Fracking for Sabal Trail’s gas mostly happens in the Marcellus Shale in Pennsylvania. But notice Florida’s governor and cabinet did not sign on to Nikki Fried’s resolution against fracking and oil drilling.

While any movement towards conservation is a good thing, and I applaud this Water Conservation Month resolution, it would be prudent for all of us to keep our eyes open.