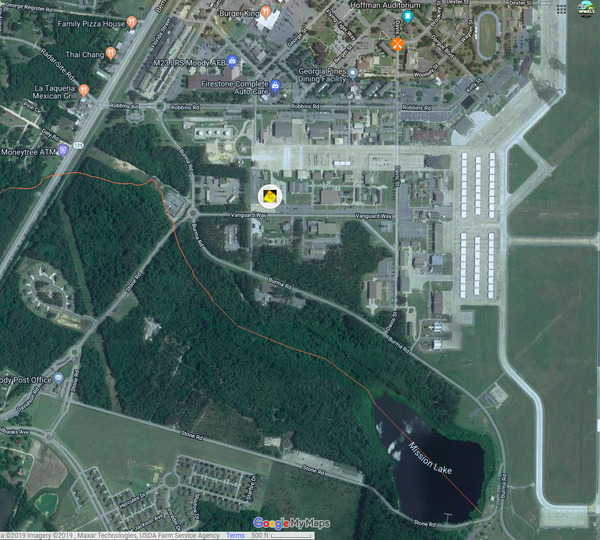 MOODY AIR FORCE BASE, Ga. — The 23d Civil Engineer Squadron was notified of a sewage leak in the vicinity of a wastewater lift station at Building 769 on Moody Air Force Base, Aug. 6, 2019 at approximately 1 p.m. After assessment, it is suspected the leak began 2-3 days prior to 23 CES receiving the notification and had resulted in no more than 3,000 gallons spilled into an unnamed tributary that flows to Mission Lake within the boundaries of Moody AFB.

So apparently the spill actually started around Saturday, August 3rd, somebody notified the Squadron on Tuesday, August 6th, this news report was posted Wednesday, August 7th, and the spill showed up in GA-EPD’s Sewage Spill Reports as 3,000 gallons of raw sewage, on Monday, August 12th, more than a week after the spill started. Not very speedy. I hope nobody was fishing, swimming, or boating downstream during that week. Also, the GA-EPD report has the “BEGIN DATE” as August 6th, which isn’t right, according to Moody AFB’s news report.

The leak originated from a broken pipe departing the lift station. Upon notification, the lift station was immediately turned off, pumping equipment was used to clean up the spill and the area of the broken pipe was then treated with lime to disinfect. Temporary repairs have been made and the station has been placed back in service while materials are on order for a permanent repair with an estimated completion date of Aug. 23, 2019.

We know where Building 769 is from Moody AFB’s own Base Map. 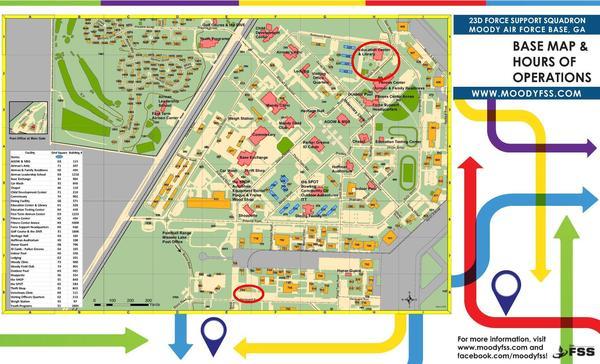 We know about the “unnamed tributary” due to USGS stream lines in the WWALS map of the Alapaha River Water Trail. We call that particular tributary Burma Branch, since it runs beside Burma Road.

While that tributary does indeed go into Mission Lake (or Mission Pond, as Google maps calls it), water continues to run downhill. 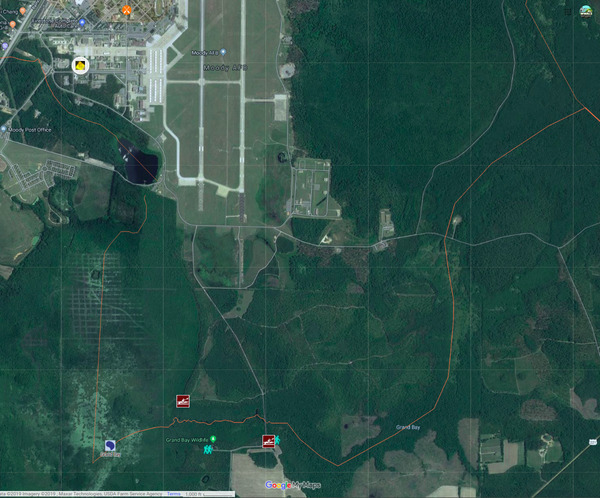 MOODY AIR FORCE BASE, Ga. — The 23d Civil Engineer Squadron was notified of a sewage leak from a man-hole on Hickam Street south of the Base Education Center, bldg. 328, on Aug. 13, 2019. After assessment, it is suspected the leak lasted approximately 30 minutes and resulted in no more than 30 gallons spilled into a curbside drain on Hickam Street.

The spill originated from blockage within the man-hole. Upon notification, the Civil Engineer Squadron’s Water and Fuel Systems Maintenance shop cleared the blockage and restored service.

I’m not completely sure what the minimum number of gallons for a required report is, but it’s probably more than 30. Nonetheless, Moody AFB did report this second, very tiny, spill, to GA-EPD, which lists it as in the watershed of Beatty Creek (presumably meaning Beatty Branch).

Thirty gallons is a lot less than the 1,350 gallons of raw sewage in the Valdosta Country Club that still hasn’t shown up in GA-EPD’s reports. 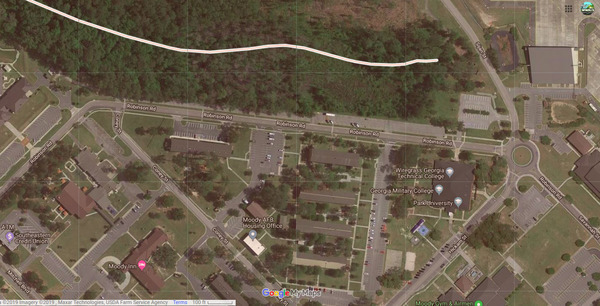 Bldg. 328 and Beatty Branch, in WWALS map of the Withlacoochee and Little River Water Trail.

Water runs downstream from Beatty Branch, too, into Cat Creek, the Withlacoochee River, and eventually the Suwannee River.

Yes, Moody AFB sits on the divide between the Withlacoochee and Alapaha watersheds, so which way the water goes depends on where inside the base.

However, the NPDES wastewater permit listed by GA-EPD for both spills is GA0020001, which is run by Lowndes County (not Valdosta) for Moody AFB. Does that mean Lowndes County also runs the lift stations and the manholes? Or does Moody AFB do that?