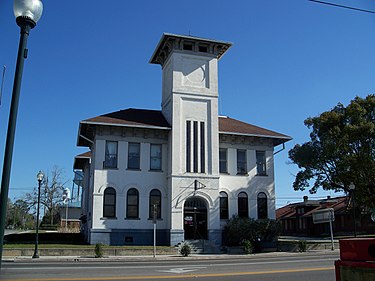 The Suwannee County Commission has called an emergency meeting tomorrow, Dec. 10, at 9:30 a.m. to discuss the fight against the Sabal Trail natural gas pipeline. It was originally on the agenda for next week’s meeting on Dec. 15.

The meeting will be at Live Oak City Hall, 101 SE White Ave in Live Oak.

Commissioners will discuss sending a letter to the US Army Corps of Engineers asking it prevent the pipeline from running through the county.

It was moved forward due to a Dec. 11 deadline for public comment with the corps, making it necessary to call an emergency meeting, said County Commission Chair Jason Bashaw.

The letter would also be sent to the Florida Department of Environmental Protection and the Federal Energy Regulatory Commission, but the focus will be on the Army Corps of Engineers, said Commissioner Larry Sessions, who originally proposed the letter.

Sessions described the corps, which has jurisdiction over some environmental matters, as the county’s last hope in keeping the pipeline out. Sabah Trail needs a permit from the Army Corps of Engineers, the DEP and FERC.

The county had already sent a letter to Spectra Energy, the chief shareholder in the venture, asking it to reconsider a controversial compressor station planned to connect to the pipeline in O’Brien.

If it sends the letter, it will join Lowndes County, Ga., and the City of Valdosta in taking a hardline stance against Sabal Trail entering their respective areas.

All the previous county and city resolutions: http://spectrabusters.org/contact/counties-and-cities/resolutions/.

How to comment to the Army Corps by this Friday (and to FERC by next Friday).

Finally, who is Sabal Trail, and Kinder Morgan has already applied to FERC for another natural gas pipeline through Suwannee County.