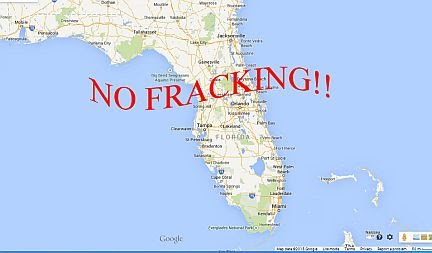 The fracking bill—SB 318—is scheduled for a vote in the Senate Appropriation Committee this Thursday, February 25.

We expect a close vote and need your help to stop the bill in this Committee.

If your State Senator is one of the 19 members of the Senate Appropriations Committee on the list below, please call him/her on now. Say that you live in the Senator’s district, and that you vote.

Ask him/her to vote NO on fracking bill SB 318.

The bill, backed by the oil and gas industry, not only would enable the dangerous drilling practice in places like the Everglades, but would force local communities to accept it. HB191 (companion to SB 318) passed the full House of Representatives on January 27 by a vote 73-45. We need to defeat the bill in the Senate to stop it.

Thank you for all you do to protect Florida’s environment.

Read more: What is Fracking and what is wrong with SB 318?

Definition of Fracking
The narrow definition of fracking in SB 318 excludes the acid-matrix stimulation technique most likely to be used in Florida. That means none of the permitting, or the study, or the rules will affect acidizations in the least—even though the same toxic cocktail will be injected into the ground.

Preemption
The bill preempts counties and cities from regulating or banning fracking. It deprives citizens of their ability to protect themselves from contaminated water supply and its health impacts.

Trade Secrets
The trade secrets provision means families won’t even be able to find out what chemicals are being used.

To learn more about the work of the Sierra Club Florida, visit our website and our facebook page.