A primary objective of the WWALS Science Committee is to compile published scientific literature for the Suwannee basin. We are doing this using online search engines including the University of Georgia System Galileo program and Google Scholar. Remarkably, our searches have identified thousands of published scientific papers and reports that link to the keyword, “Suwannee”. Examination of many revealed that they describe research using dissolved organic matter isolated from the Suwannee River near Fargo, GA. This is the material that gives the water its special color. 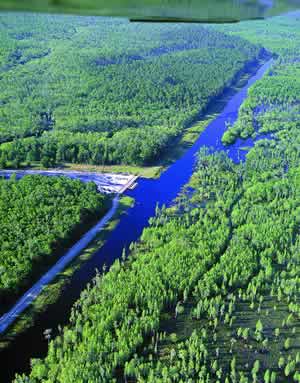 Digging further we found that this material is available in various forms from the International Humic Substances Society (IHSS). IHSS, which was founded in 1981, is a 900 member scientific organization that is recognized as the world leader in fostering scientific education and research, and promoting public understanding of humic substances. We contacted the IHSS past-president, Dr. Michael Perdue and received the following gracious response describing the history of IHSS’s Suwannee project.

Dr. Perdue also provided a complete database of scientific studies that have used the Suwannee dissolved organic matter. By the end of 2016, there were more than 780 published studies that had been cited more than 30000 times. This makes the Suwannee River dissolved organic matter the most studied and the most famous on the planet. Another great local connection is that Dr. Perdue is a native of Waycross GA where he graduated from Ware County High School. He went on to get his PhD in chemistry at Georgia Tech and has had a distinguished academic career spanning more than 40 years.

The Okefenokee National Wildlife Refuge (ONWR) in southeastern Georgia and northeastern Florida is a remarkable, nearly pristine blackwater ecosystem. The thriving ecosystem includes the headwaters of the Suwannee River, where pH is often below 3.5 and the concentration of dissolved organic matter is more than an order of magnitude greater than in the world-average river. It is mainly because of the relatively minimal human impact and very high concentration of dissolved organic matter that the headwaters of the Suwannee River was selected nearly forty years ago as the location from which samples of natural organic matter would be isolated for the standard and reference collection of the International Humic Substances Society (IHSS). Over the years, ten standard and reference samples have been collected there and distributed to hundreds of scientists throughout the world for their research and for interlaboratory comparisons of research methodologies.

All IHSS samples have been collected at the southernmost dam on the Suwannee River sill, accessible near Fargo, Georgia. Each sample consisted of at least 15,000 liters of river water. Over the years, the water retention components of the dam gradually failed, leaving effectively only a bridge at the IHSS sampling site. In the mid-2000’s, the ONWR decided to not repair the dam and to deliberately breach the sill farther upstream from the IHSS sampling site. Since that time, soils upstream of the dam structure are no longer almost continuously flooded. Drier average soil conditions should facilitate contact between soils and oxygen, which might affect water chemistry. The concentration of dissolved organic matter at the sampling site has approximately doubled between 1983 and 2016; however, the chemical composition of that dissolved organic matter has remained virtually constant. In the mid-2000’s, the ONWR also eliminated its policy of highly restricted vehicular access to the dam (bridge) and even paved a road to the dam and a parking area near the dam. IHSS is concerned that the nearly pristine character of this sampling site may have been compromised by much greater public access.

The first IHSS samples were isolated in 1982-1983 and introduced to the scientific community at the first meeting of IHSS in mid-1983. The following two plots were generated using Web of Science on August 19, 2016. The query spanned the years 1980-2016 and included the following search terms: “Suwannee” AND (“fulvic” OR “humic” OR “natural organic matter” OR “NOM”). The first plot shows the number of papers that have been published per year by scientists from all over the world. The rate of publication has grown steadily since the first papers appeared in 1987.

Number of published papers per year dealing with fulvic acids, humic acids, and natural organic matter from the headwaters of the Suwannee River in the Okefenokee National Wildlife Refuge.

The second plot shows the impact of the published papers through the number of citations per year of those papers by other scientists. The exponential growth of citations since 1988 has now reached a rate of almost 3800 citations per year. On the basis of such evidence, the world’s scientific community, especially in environmental sciences, ecology, engineering, chemistry, and geochemistry, relies heavily upon samples from the Suwannee River.

Number of citations of published papers per year dealing with fulvic acids, humic acids, and natural organic matter from the headwaters of the Suwannee River in the Okefenokee National Wildlife Refuge.

“I grew up in Waycross, so the Suwannee and Satilla rivers were a part of my early life in south Georgia. I graduated from Ware County High School in 1965, BS in Chemistry from Georgia Tech in 1969, and Ph.D. from Georgia Tech in 1973. One of my first scientific papers (1974) dealt with organic and inorganic geochemistry of several south Georgia rivers, especially the Satilla.”

What are Humic Substances?