How close to exposed is Sabal Trail’s pipe? This sinkhole is at least a foot deep, maybe two or more, and Sabal Trail only buried their pipe three feet deep, despite requests by Brooks, Colquitt, and Lowndes Counties to bury it deeper.

Is that fill material exposed on the north edge of the sinkhole? Was this previously a sinkhole they filled and now it’s active again?

Off of Coffee Road west of GA 333, Google maps

I could only see this one sinkhole from where I was standing on an unmarked access road, but Google maps seems to show it and more and bigger sinkholes nearby.

Here’s what this same section looked like from the air October 22, 2017, on the same flight on which I discovered Sabal Trail’s frac-out of drilling mud into the Withlacoochee River.

It’s hard to be sure with the resolution available, but it looks like the north side of the pipeline right of way was already wet there then. Which would match with what look like fill materials now exposed again towards the north edge of the right of way.

This is the same Okapilco Creek crossing at Coffee Road for which WWALS filed a complaint with GA-EPD 2016-12-06. It turned out that with Georgia’s “wrested vegetation” version of waterway frontage, Sabal Trail was technically within their easement.

About seven miles upstream of here Okapilco Creek was flooded half a mile wide at GA 122 back in January.

That was the same January rain that washed Randy Dowdy’s world-record soybean fields into a nearby creek because Sabal Trail didn’t fix his terraces after they broke them before the rain. 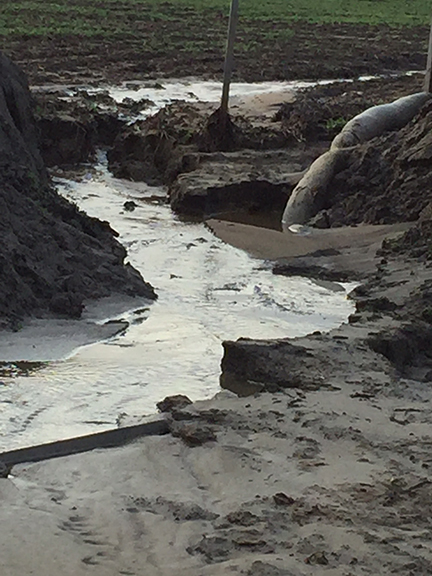 Meanwhile, solar power needs no pipelines, no eminent domain, no testing or cooling water, and emits only clean electricity. Like, for example, the 769 kW solar project behind Langboard off of US 84 just west of the Withlacoochee River.