Guest speaker at the August OSFR board meeting was Suwannee RiverKeeper John Quarterman from Georgia.

John gave a detailed run-down of the benefits and responsibilities of a riverkeeper, of which there are around 350 scattered around the globe.

What does John do?

Actually he does quite a bit. A brief search ended up on the WaterKeeper Alliance website which had an article about John (and some OSFR people.): Suwannee Riverkeeper Fights to Protect Okefenokee Swamp from Titanium Strip Mine. 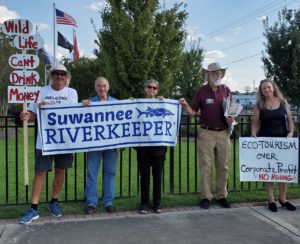 And this is just one recent example.

There has been discussion from time to time, going back years, about the possibility of having a Santa Fe Riverkeeper.

There is never been much interest from the OSFR board. This is probably because John is doing a good job of protecting all parts of the Suwannee, which includes, of course, her largest tributary[see below], the Santa Fe River.

Indeed, John attends all the important meetings regarding the fate of the Santa Fe, no matter how far from Georgia.

OSFR appreciates the good work done by the Suwannee RiverKeeper and thanks him for his visit to our meeting.

-A river is like a life: once taken, it cannot be brought back-

For the requirements to be a Waterkeeper, I read from the WWALS application to be WKA Member Suwannee Riverkeeper, 2016-10-13, especially the Quality Standards on pages 7-8. OSFR, which prefers to remain all-volunteer, has never been interested in the first thing on that list: “Employ a full-time, paid, non-governmental public advocate for the identified water body, who identifies him or herself with the Waterkeeper mark and who serves as the primary spokesperson for the water body.” OSFR is already doing most of the other WKA Quality Standards, and so does not need WKA’s help to do them.

Nowadays Waterkeeper Alliance prefers all new Members to use the trademark Waterkeeper. Apparently that’s easier to defend as a trademark than the historical plethora of Riverkeepers, Creekkeepers, Coastkeepers, Baykeepers, etc.

I summarized the WWALS response to WKA’s request about that, which I quote here:

A large sign there quotes the Florida state song, the reason the Suwannee River is known far and wide:

“‘Way Down Upon the Swanee River….”

“‘Way Down Upon the Swanee Waterkeeper….”

When we say “we’re like a Riverkeeper” everybody smiles and nods and mentions another Riverkeeper they know.

This phenomenon is not limited to this one event: it happens every day online and on the telephone.

The Riverkeeper name is the greatest single reason WWALS is making this member application.

You mention that name Riverkeeper is grandfathered in for those that already have it. This should be the case for WWALS, since WWALS became an Affiliate before St Marys Riverkeeper applied to join Waterkeeper Alliance.

For all these reasons, the name WWALS is applying for is Suwannee Riverkeeper.

Apparently WKA agreed with our reasons, since they gave us the name Suwannee Riverkeeper.

OSFR wanted to know what are the advantages of being a Waterkeeper. I listed:

I could have mentioned the mighty WKA publicity megaphone, which occasionally picks up Suwannee Riverkeeper work, such as that post Jim found about opposing the strip mine next to the Okefenokee Swamp.

OSFR wanted to know what all that costs. Annual WKA dues are $250/year for an organization of our size. The conferences cost more, but are worthwhile, for the networking with colleagues, and for the sessions, which usually have five or more tracks, so it’s best to take more than one person. Attendance at the annual conference is required, although we have noted some examples of Waterkeepers not attending at least one year.

I told them that from my perspective OSFR has less need of Waterkeeper Alliance, because OSFR has a compact territory, with springs to attract people, a conveniently-located meeting place, and a major city next door. I told them if they ever did need something from WKA, they could ask Suwannee Riverkeeper.

I could have added that OSFR has mostly one river (plus the New and Ichetucknee), unlike our dozen rivers in 10,000 square miles in two states and more than thirty counties.

So the Santa Fe River Basin may be smaller than most of the others, but there are issues in it that need everyone’s help, such as the HPS II phosphate mine application.

As I mentioned to OSFR, I leveraged the Suwannee Riverkeeper name to get Waterkeepers of Florida to sign the Resolution Against Phosphate Mines in Florida, I used that resolution to help motivate the formation of Waterkeepers Florida, with all thirteen Waterkeepers of Florida, and at the first meeting of WKFL, their first act was to sign that Resolution for the new organization. WKFL now actively meets with the Florida Department of Environmental Protection (FDEP), so far twice in Orlando at meetings for that purpose, and writes letters such as about Cyanobacteria, as well as participating in workshops, hearings, and state legislative meetings.

I mentioned the Waterkeeper Alliance resolution to oppose FERC, moved by Flint Riverkeeper, seconded by Suwannee Riverkeeper, in the regional retreat, forwarded to the full body in the 2017 Annual Meeting, which approved it. That didn’t stop Sabal Trail, but it helped in opposing that pipeline and in opposing the general problem of fracked methane.

I could have mentioned that the Suwannee Riverkeeper name was very useful in getting quite a few Florida and Georgia organizations to sign the Resolution asking Georgia EPD to timely publish spill reports, which was successful: GA-EPD now does that, each business day. OSFR was one of the signatories, in yet another example of OSFR and Suwannee Riverkeeper working together.

I also read to OSFR from what we wrote about OSFR in our 2016 application to be Suwannee Riverkeeper:

We do not include the only major Suwannee tributary wholly in Florida, the Santa Fe River, because it is already served by our neighbor and long-time ally, Our Santa Fe River (OSFR). OSFR is not a Waterkeeper Affiliate or Member, yet does all the same work.

Even before that, I and others tried to persuade OSFR to become a Riverkeeper. It is clear after years of that, with three successive presidents of OSFR, that they do not want to. Two of those presidents were present at that meeting: Mike Roth (current) and Merrillee Malwitz-Jipson (former).

Therefore, as I explained to OSFR, and as I previewed to Mike Roth when he invited me to that meeting, Suwannee Riverkeeper has applied to Waterkeeper Alliance to add the Santa Fe River HUC 03110206 to the formal territory of Suwannee Riverkeeper, completing the entire 9,950 square miles of the Suwannee River Basin (5,720 in Georgia and 4,230 in Florida).

Suwannee River Basin; Santa Fe HUC 03110206 is the purple-tinted one in the southeast of the Basin.

Meanwhile, if the WKA Council approves, they will be formalizing what has been the de facto situation for several years now: the Riverkeeper for the Santa Fe River is Suwannee Riverkeeper.