There was good news, but actual responsibility or accountability by Valdosta was hard to find, at the January 8, 2020, evening meeting of the Florida counties Task Force with the Valdosta City Council. It was attended by a record number of citizens from Florida and Georgia, many of whom were quite vocal. You can see it all in these WWALS videos. 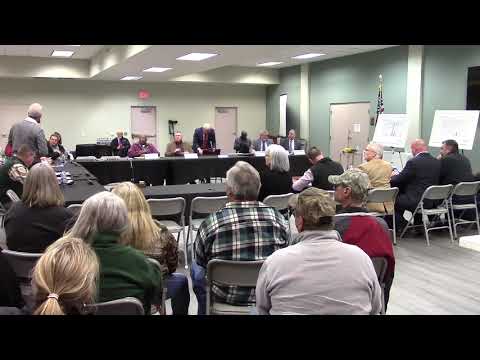 The good news included stormwater infiltration into the sewer system reduced by 25%, faster remediation of manholes, and the long-awaited catch basin for the WWTP is permitted. Yes, Valdosta has battery or generator backup for its lift stations and the two Wastewater Treatment Plants.

Per incoming Mayor Scott James Matheson’s request, I repeatedly described the Mayor’s Paddle organized by WWALS, then upcoming on January 18th. It went well, and we got a lot of good press out of it. Yet not a single person from Valdosta Utilities, nor the City Manager, paddled with WWALS and the Mayor. Valdosta even refused to test the Withlacoochee River before their own Mayor paddled: “We did what we were required to do.”

The new Mayor, at this meeting one day before being inaugurated, said he had met with the city staff and was impressed, but expected to hold them accountable. Many of us look forward to that.

Even about who is on the list to be notified of a spill, Barber pointed at the Florida Counties Task Force as the source of the list. That doesn’t explain why Valdosta didn’t notify Brooks County, Georgia, with many miles of Withlacoochee River frontage, nor what a Florida group had to do with that. When I asked about Brooks County, Utilities Director Darryl Muse said they got the press release. Well, the Brooks County Manager first found out from Madison County, FL, and from me, so it is unclear exactly where the press release to Brooks County was sent. It’s not even clear Valdosta notified Lowndes County directly. We know Valdosta did not notify the Lowndes County Health Department nor the Georgia Department of Health.

Even among those notified, Don Hale, Suwannee County Commissioner, noted the first notification didn’t even mention Sugar Creek, he had told people at least it didn’t get into waterways, so he ended up with crap on his face. WWALS is familiar with years of being blindsided like that by Valdosta about sewage spills.

Barber promised to fix the notification list: just sign the sheet being passed around, but we’ve heard that over and over for years now. He also blamed GA-EPD, whom he alleges “doesn’t want us to contact you guys.” That provoked some incredulity from the Task Force Chair.

Task Force Chair Rick Davis wanted to know how we could all improve quality of life by promoting eco-tourism, and how we could repair the reputation of the rivers. Mayor Scott James said by celebrating no spills. That’s good, but not sufficient. We haven’t even finished the health and financial aftermath of this spill, nor dealt with the stigma which lingers in the reputation of the rivers.

Davis tried again, and Vice-Chair Burnam asked how many Valdosta City Council members were there? Seven. How many were present? Three. She wondered if they were taking this problem seriously? Answer, yes, but it’s a church night. She graciously acknowledged their priorities.

Chris Mericle, who lives on the river in Hamilton County, asked whether Valdosta was inspecting all its manholes. Utilities Director Darryl Muse quickly said there were far too many. Not a hint of prioritizing and at least checking the ones along waterways.

When Task Force Chair Rick Davis noted there was lack of oversight, the City Manager responded that it was a quality control issue. Yet he revealed that Valdosta’s Standard Operating Procedures (SOP) don’t even include inspecting the lift stations daily.

Various people in various ways asked why was there no oversight of the contractor who disconnected the SCADA system at the Remer Lane Pump Station and produced Valdosta’s record-largest raw sewage spill? We were told Utilities didn’t know the contractor was going to do what he did. Which begs the question: why was not someone from Utilities there to be sure he didn’t?

When I asked how to get the SOP, the City Manager said, “from EPD; you know them well.”

After the umpteenth reiteration of they just followed the SOP given to them by GGA-EPD, one Valdosta citizen, Don Thieme, got a bit pointed, saying citizens here want you to do more than what the state tells you. Scott James said, “We’re going to add signs; I promise.” Weeks later and there are no added signs; instead, the one at Troupville Boat Ramp quietly disappeared. A few days after this meeting, WWALS and Lowndes County put up warning signs on the Withlacoochee River in Georgia, at Knights Ferry, Nankin, and State Line Boat Ramps.

The Florida counties Task Force Chair Rick Davis pointed out that the Florida Department of Health (FDOH) was issuing its third advisory, because of high E. coli found at GA 31 (State Line Boat Ramp) by FDOH and the Florida Department of Environmental Protection (FDEP). I passed out the WWALS blog post on that subject, and Davis read from it. This seemed to be news to the City of Valdosta, perhaps because they hardly ever test at State Line Boat Ramp anymore.

Davis remarked that low water and low flow had stalled the sewage upstream, but rain had brought waves of contamination downstream. He said it was a long-term event, with costs to counties and personal costs. He asked if Valdosta would assist. This long-term event is part of the on-going stigma.

Stew Lilker of the Columbia County Observer wanted to know what exactly happened? You’d think Valdosta would have writeup on that prominently placed on its website, but apparently not.

Individuals such as Denise Shirey of Florida Campsites near Jasper in Hamilton County asked if Valdosta would help them with contaminated wells. Beth Burnam, Hamilton County Commissioner, and Vice-Chair of the Task Force, said “we are poor counties” and filtration systems are expensive. Valdosta never did quite say they would help with such expenses. Denise Shirey asked if Valdosta would be putting a claim form online. I think the City Manager said they would consider that.

Robin Postell of Valdosta Today wanted to know would there be accountablity, and would there be fines? Well, we don’t know yet, but many sources say GA-EPD is of a mind to finally impose some fines on Valdosta.

There was much discussion of notification systems, especially how to notify people who don’t have email and don’t facebook. Valdosta didn’t seem to have any ideas on that. Valdosta resident Tom Potter pointed out Valdosta does have a fine website, so they could at least post updates on there. For people without Internet, other sources of sewage spills organize canvassing and hanging door hangers on doorknobs. Sure, that could cost Valdosta some money. It would also bring Valdosta some very good public relations for being responsible.

Madison County Commissioner Rick Davis wanted to know if Madison County residents present got a Code Red telephone call? Several hands went up. Lowndes County never sent out a Code Red call because Valdosta never agreed to it. At least Lowndes County (which has its own sewer system, which did not spill) started testing water quality weekly at several locations on the Withlacoochee River, and now also on Okapilco Creek. Valdosta has refused to do that, saying, “we did what we were required to do.”

I managed to make my point that testing on access points on the 27 river miles between U.S. 84 and the state line was necessary so as to give real warning to Florida of approaching contamination. Tom Mirti of the Suwannee River Water Management District (SRWMD) said SRWMD sometimes tested as far upstream as US 84, and points between. The City Manager said Valdosta had tested at “Knights Creek”, presumably meaning Knights Ferry Boat Ramp. Through yet another open records request, later WWALS found that yes, once Valdosta tested, and the city’s data point fitted well with those of WWALS, SRWMD, ,FDEP, etc. At this meeting, the City Manager’s summation was, “We’re not going to waste these folks’ time.” Nevermind these folks were the people who needed to know. He did say we could discuss it later.

I am sending a letter to Valdosta tomorrow requesting a meeting between Valdosta and WWALS to discuss that and other issues to Valdosta flushing 7.5 million gallons of raw sewage down the Withlacoochee River and what Valdosta’s responsibilities may be for that and a long history of sewage spills.

In addition to promoting the Mayor’s Paddle, I also noted the Troupville River Camp would be cross-state-line eco-tourism, but for that to work we need a foundation of water quality testing data, at least weekly, at all the places tested since this spill.

The next quarterly Task Force meeting with Valdosta will be April 8, 2020, same time, 6PM, same location, Valdosta City Hall Annex. (The Task Force already met by its lonesome in Lake City; more on that later.)

Disclaimer: many of the people present at this meeting, and many of those who spoke, are WWALS members. We didn’t make them show up. They insist that we try to do something.

Below are links to each WWALS video of each topic as near as I could pick them out, followed by a WWALS video playlist. See also:

And see also the WWALS videos of the meeting earlier that same day in Madison, Florida.

Here are the WWALS videos of the meeting in Valdosta: