Like its predecessor two years ago, this GA HB 1150 would allow only a year for anyone to sue if an industrial hog farm or other such problem opened next door. Despite not being able to name any frivolous farm nuisance suits, the bill’s backers claim preventing those is their purpose. Whatever their purpose, the practical effect of this bill would be to let North Carolina-style hog CAFOs into Georgia, polluting our air and water.

Please contact your Georgia statehouse delegation and ask them to stop HB 1150. Here is a way you can find out who that is: https://openstates.org/find_your_legislator/

The proposed legislation declares that any farm in operation for a year or more cannot be found by a court to be a nuisance. That added level of protection strips neighbors of their legal power to force a farm to correct a problem, such as creating overpowering odors from manure sludge ponds, opponents say. 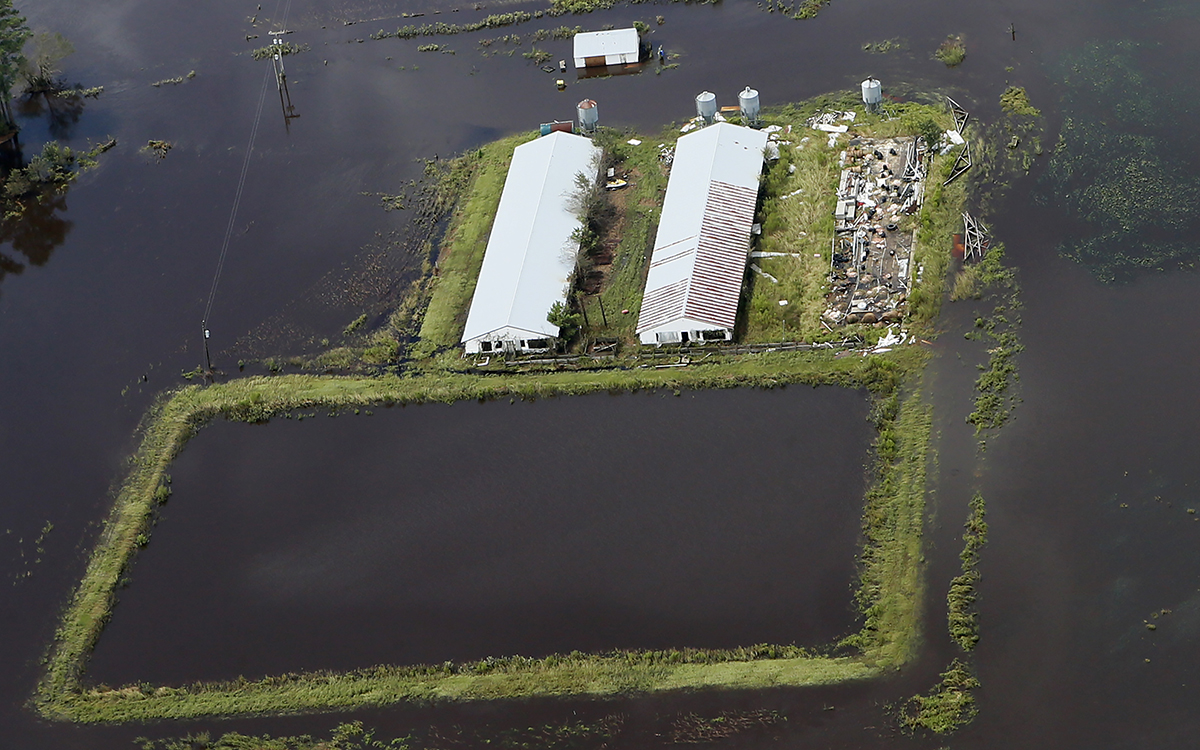 The changes also would encourage “industrial scale” animal operations by making them bulletproof from nuisance suits that have cost massive operations in other states millions of dollars to fix problems or pay for diminishing neighbors’ property values, said April Lipscomb, a senior attorney with the Southern Environmental Law Center.

“The clear losers are private landowners and the general public, and the clear winners are the multinational conglomerates who want to move into the state of Georgia,” Lipscomb said.

Dickey said the change is needed to protect farmers’ investments and practices so they can continue producing crops that are a critical part of Georgia’s economy.

Farming is the still the largest single state economic sector, producing an annual $12.2 billion in agricultural goods and a compounded $69 billion in economic impact, according the University of Georgia’s most recent numbers.

“What we are trying to do with this bill is find a happy medium and keep farmers and neighbors out of lawsuits,” Dickey said.

There have been few such suits filed in Georgia. Dickey said he is trying to get ahead of them. Lipscomb said it’s unnecessary.

“I don’t know of a single farm that has shut down because of a nuisance lawsuit,” Lipscomb said.

Lipscomb said that limiting the window to sue a farm to one year from the beginning of operations essentially makes it impossible for a farm to ever be found to be a nuisance. It takes time to get an operation going, and people who discover a problem from smells or other issues can often spend months or more than a year trying to find the source, then work their way from county to state government trying to get a resolution.

“We have to have the right balance between protecting existing communities and farms and the need to allow for encouraging additional agricultural operations in Georgia, but this bill does not strike that balance,” she said.

Dickey said discussion of the bill will begin next week.

Unlike last time, HB 1150 is not a legislative priority for the Georgia Forestry Association.

Even when they are not overflowing, such hog manure lagoons produce a powerful stink. We don’t need that smell in Georgia.

And we don’t need the nitrates from that manure in our waterways and groundwaterr, causing bad health in humans and wild plants and animals.

Many hog CAFOs in North Carolina are located near rivers and other bodies of water and pose a significant environmental risk. Hog waste contains disease-causing pathogens such as E. coli as well as high levels of nitrogen and phosphorous, which can contribute to fish kills, toxic algae blooms, and contaminated drinking water. In 2015, the United States Geological Survey reported that 58 percent of watersheds where CAFOs were located showed distinct water quality impacts.

The effects were disproportionate in eastern North Carolina, where hog CAFOs are often located near communities of color. Researchers at Duke University released an analysis this month that found that more African American and Native American residents live in zip codes with hog CAFOs compared with those who don’t. The study found a higher incidence of infant mortality and other conditions such as kidney disease and tuberculosis in those same communities.

“We’ve found that in communities around hog CAFOs, there were a significant number of poor outcomes for diseases, from infections and kidney disease to low-birth-weight infants to tuberculosis and deaths from HIV,” said Dr. H. Kim Lyerly, senior author of the analysis and a professor of surgery, pathology, and immunology and the director of the Environmental Health Scholar Program at Duke. “If you map the economic and social characteristics of the populations living in those zones, they are increasingly poor and populated with African American, Latino, and Native American populations.”

Unfortunately, two state representatives in the Suwannee River Basin, Sam Watson and Clay Pirkle, are among the cosponsors of HB 1150. If one of them is your legislator, you can contact them anyway and tell them you think this bill is a bad idea. Politely, please, but firmly.