Apparently I asked some interesting questions to the corporate parent of Georgia Power. I got Southern Company CEO Tom Fanning to admit he had already given a partial answer, even though SO is still reluctant to deploy renewable energy and storage at scale.

Surprisingly, when I asked him afterwards, Fanning said he had never heard of Stanford Professor Mark Z. Jacobson and his work on powering the world on wind, water, solar, and storage power and nothing else. Jacobson’s group has produced plans more than 100 countries and each U.S. state, including Georgia.

…About 200 people attended the annual meeting,which lasted two hours and forty-five minutes. After the official part of the meeting was over, there was a question-and-answer period, which Fanning said was his favorite part. He engaged with shareholders — 17 of whom asked questions or made comments, several of them critical of various Southern Co.’s practices — be it unlined coal ash ponds across the system, its investment in the Plant Vogtle nuclear plant or a need to be more aggressive in expanding its renewable energy portfolio.

“Tom Fanning is really, really good at his job as you have observed — he’s unflappable and always hospitable,” said John Quarterman of Lowndes County (an environmentalist and shareholder) as he addressed the meeting.

Then Quarterman observed that New Jersey and Massachusetts have more solar power than Georgia.

“Could it be because they are not wasting money on a nuclear boondoggle?” he asked, adding how much better off Southern Co. would be today if it had used Plant Vogtle dollars to invest in solar and wind energy as well as energy storage. 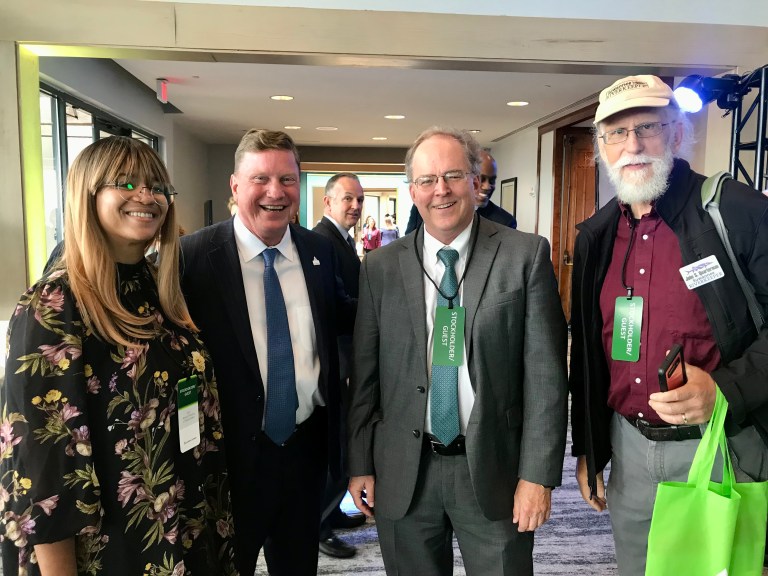 While Quarterman praised Southern Co. subsidiary Georgia Power for what it has done, “it’s nowhere near enough.” As to Southern Co.’s pledge to be a net-zero carbon company by 2050, Quarterman said “2050 is too late.”

“When are we going to see a real effect on climate change?” he asked — getting applause from many in the room.

Fanning took it in stride.

Fanning did say the impact of climate change on the environment will get bigger. “We have got to have renewable, carbon-free energy,” he said. “I think we have done both.”

Quarterman wasn’t done. He asked about the development of micro-grid technology — creating a mini power source that generates and stores renewable energy — such as solar.

That concern also was expressed by other shareholders, including Neil Sardana of the Sierra Club, who said micro-grid technology could make major power plants obsolete.

Fanning responded by saying Southern Co. has acquired PowerSecure, which has a 75 percent market share in microgrid technology in the United States.

“We are by far the leader. I think that is a brilliant idea,” said Fanning, adding he is a believer in creative destruction. “We can miniaturize the power structure. We have been wildly successful in microgrid. Right now, it’s a peanut. Just playing defense is not sufficient. We have to play offense.”

Tom Fanning & Neil Sardana
Southern Co. CEO Tom Fanning responds to a question posed by Neil Sardana of the Sierra Club. (An image taken from the video of the annual meeting.)

He went on to say the next generation of Southern Co. employees will challenge the old thinking that central power stations will rule the day forever. Although he sees the future development of distributed infrastructure, Fanning said he didn’t think it will displace the large power plants.

Brionté McCorkle, a shareholder and environmentalist, asked about the equity of lower-income people not being able to make their homes more energy-efficient or unable to install solar panels where they live.

She also told Fanning there’s a disconnect between what she hears him say and what legislators say in Georgia Power’s position on legislation, including solar.

“I don’t think Georgia Power is slow-walking anything with solar,” Fanning said, adding he doesn’t want lower-income customers subsidizing solar for higher-income people. “One of the blessings of the infrastructure, it provides a boatload of money that can help solve some of these problems. I’m all in on energy efficiency.”

“It’s very clear that our future is embedded with renewables. I’m very bullish on the future for solar,” Fanning said adding there’s a great need to be able to store solar power. “In our area, the most efficient thing we can do is solar by far.”

He said he especially loves being able to generate solar power on a building’s roof — generating and using solar at the same place. “You’ve heard me,” Fanning said. “I love solar.”

During the entire annual meeting, it was obvious Fanning was enjoying the exchange with shareholders and even his critics. It was also obvious he had disarmed the opposition with his persona.

“Those of us who have been together here, it’s not normal for a company this large to have such great dialogue like we are having here today,” said Sam Collier, an Atlanta environmentalist and shareholder. “Thank you for letting us be here.”

The room broke out with applause.

Shareholder Sam Collier thanks Southern Co. CEO Tom Fanning for the constructive dialogue. (An image taken from the video of the annual meeting.)

Collier added that Fanning has that dialogue on a national level with environmental organizations around the country.

For those of us who remember when the Southern Co. bristled when people brought up climate change, Fanning’s comments were refreshing.

“It is absolutely true that we are going to have to deal with the carbon atom — either directly through capture or indirectly through the net negative approach. We are spending real money on these solutions,” he said.

Later he added: “There’s room on both sides of the aisle to strike a deal [on climate change], but the physics of striking a deal in this environment is tough [given that it’s an election year]. After 2022 we may be able to do something faster… I’m actually pretty hopeful.”

The Southern annual meeting was unique because everyone who wanted to ask a question or make a comment was able to do so without a timeclock to cut them off. At one point, environmentalist Mark Woodall told Fanning his predecessors would not answer all his questions.

“We’ve got all day,” Fanning responded.

The tone of the annual meeting was set at the beginning when Fanning talked about the divisiveness in the country today.

“It’s companies like ours that I think can create a constructive dialogue — can create a forum for the disparate parts of this country to come together and really work for the benefit of all of our citizens,” Fanning said.

At the end of the meeting, Fanning continued that theme.

“We are so divided right now as a nation,” Fanning said. “We’ve got to figure out ways to bring people together. One of the things I’m so proud of this conversation we are having today, even when you say stuff and lecture me, we have a constructive engagement. We act on what you say. That’s what we’ve got to do in Washington.”

Fanning closed by saying he welcomes any and all ideas from shareholders. Then he added: “I love these meetings.”

We will follow up with Ronny Just of Georgia Power Company and others, including Tom Fanning.

Except as otherwise noted, all the images in this post are stills from that video.

There seems to be no way to link directly to specific timestamps in that video. However, below are the times some of the speakers were called on.

2:31:00 Sam Collier, Atlanta, GA, about dialogue Not normal for a company this big to have dialogue like this. Applause.