WWALS is about environmental issues such as those FL-DEP said could proceed. 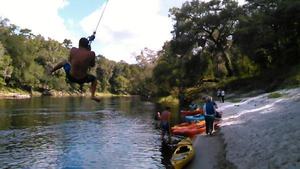 However, environmental issues extend far beyond FL-DEP’s narrow view. A pipeline sinkhole could affect springs or wells miles away, and that could affect property values, insurance rates, and of course eco-tourism. Tourism brings in $67 billion a year to Florida. Why would any Florida state agency want to risk that for a pipeline when the Sunshine State can go straight to solar power?

On Thursday, the WWALS Watershed Coalition announced and the Sun reported erroneously that the Florida Department of Protection had rejected all of an amended petition to challenge a DEP permit in before a Division of Administrative Hearings judge.

“Everyone told us we’d never get a hearing, so apparently we interpreted the previous day’s FL-DEP dismissal too broadly,” WWALS President John S. Quarterman said in a statement Friday. But sometimes if you try, you succeed. And WWALS continues to try to stop the unnecessary, destructive, and hazardous Sabal Trail pipeline.”

The DEP did reject a petition filed by a newly formed Florida subsidiary of WWALS and rejected portions of the WWALS challenge that raised concerns about diminished property values, higher insurance rates and negative impacts to eco-tourism and alleged a conflict of interest because Gov. Rick Scott, through his blind trust, owned a stake in one of the companies involved in the project.

Portions of the challenge that focus on environmental issues such as impacts to wildlife habitat, water quality, wetlands, the aquifer and the area’s rivers and springs will proceed to a hearing.

Here’s the letter from FL-DEP that says that.