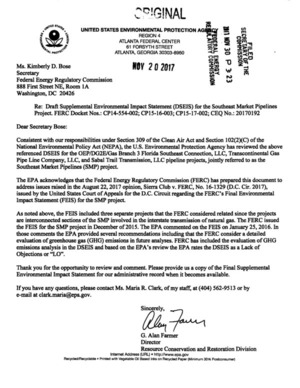 Yet FERC’s Docket CP15-17 shows no comment by EPA in January 2016. It does show this same G. Alan Farmer, Director, Resource Conservation and Restoration Division, EPA, wrote a letter to FERC filed 1 December 2015 as Accession Number 20171201-0034 (see also WWALS blog post), in which he said nothing I can see about greenhouse gases, but he did basically say “nevermind” to EPA’s extensive letter of October 26, 2015, filed as Accession Number 0151102-0219 (clean text on the WWALS website), which October letter did include:

The DEIS did not fully address the December of 2014’s Revised Draft Guidance for Greenhouse Gas Emissions and Climate Change Impacts issued by the President’s Council on Environmental Quality (CEQ). As described in the guidance, “Unlike the 2010 draft guidance, the revised draft guidance applies to all proposed Federal agency actions”. The FERC should comply with the guidance and fully address the requirements in either a supplemental or final NEPA document. The EPA generally supports alternative, cleaner fossil fuels such as natural gas to replace coal— fired and oil-fired power plants. However, considering the potential magnitude of the proposed project and its resulting greenhouse gas (GHG) emissions, the EPA is requesting that a full life cycle analysis (LCA) be conducted for the proposed pipeline project

So the same EPA Director who in December 2015 basically told FERC to ignore EPA’s GHG objections of October 2015 now tells FERC EPA made GHG objections in a nonexistent letter of January 2016.

Consistent with our responsibilities under Section 309 of the Clean Air Act and Section 102(2)(C) of the National Environmental Policy Act (NEPA), the US. Environmental Protection Agency has reviewed the above referenced DSEIS for the OEP/DG2E/Gas Branch 3 Florida Southeast Connection, LLC Transcontinental Gas Pipe Line Company, LLC, and Sabal Trail Transmission, LLC pipeline projects, jointly referred to as the Southeast Market Pipelines (SMP) project.

The EPA acknowledges that the Federal Energy Regulatory Commission (FERC) has prepared this document to address issues raised in the August 22, 2017 opinion, Sierra Club v. FERC, No. 16-1329 (D.C. Cir. 2017), issued by the United States Court of Appeals for the DC. Circuit regarding the FERC’s Final Environmental Impact Statement (FEIS) for the SMP project.

As noted above, the FEIS included three separate projects that the FERC considered related since the projects are interconnected sections of the SMP involved in the interstate transmission of natural gas. The FERC issued the FEIS for the SMP project in December of 2015. The EPA commented on the FEIS on January 25, 2016. In those comments the EPA provided several recommendations including that the FERC consider a detailed evaluation of greenhouse gas (GHG) emissions in future analyses. FERC has included the evaluation of GHG emissions analysis in the DSEIS and based on the EPA’s review the EPA rates the DSEIS as a Lack of Objections or “LO”.

Thank you for the opportunity to review and comment. Please provide us a copy of the Final Supplemental Environmental Impact Statement for our administrative record when it becomes available.