Due to tens of millions of dollars spent by Valdosta, we don’t see spills of tens of millions of gallons anymore. The most obvious Valdosta Sanitary System Improvement is the new, uphill, out of the flood plain, Withlacoochee Wasterwater Treatment Plant, pictured here on Scott Fowler’s office wall at Valdosta Utilities: 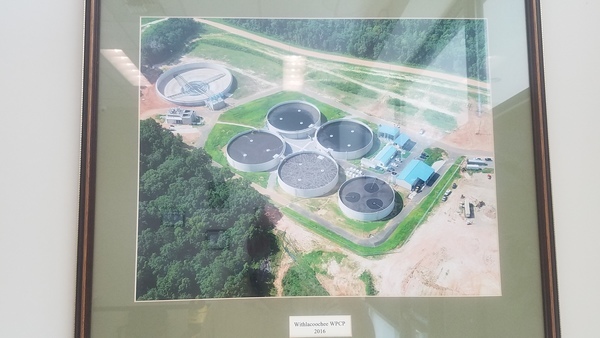 The old, now-closed, Withlacoochee WTP was the plant that had the biggest problems back in 2009 and 2013. As found on the City of Valdosta website, the 23 September 2013 Valdosta Consent Order from the Georgia Environmental Protection Division is now also on WWALS website, including I made a web version, from which I extracted the paragraphs quoted below.

This was the original problem: 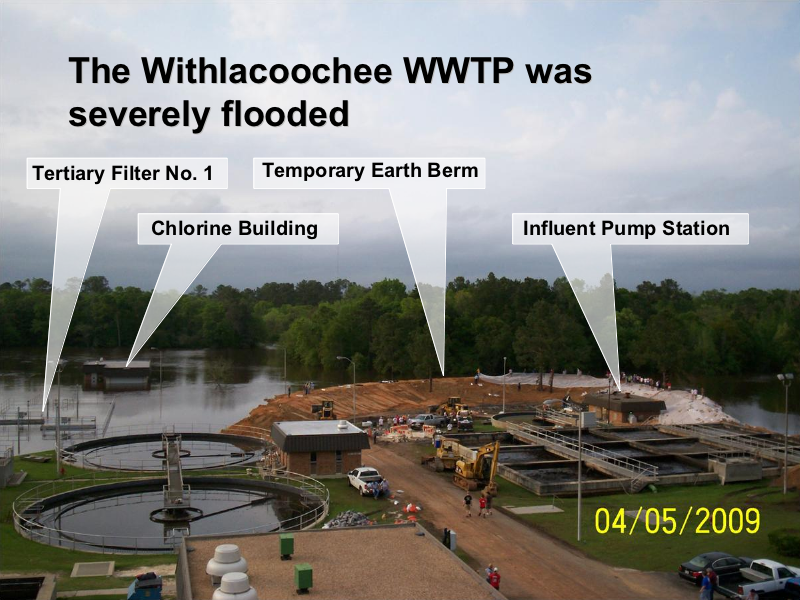 WHEREAS, on December 7, 2009, the Mud Creek WPCP sanitary sewer manhole receiving all influent flow into the WPCP collapsed, along with associated piping, and, according to the City’s December 14, 2009 report to EPD, an estimated 5,500,000 gallons of raw sewage spilled into Mud Creek from December 8, 2009 to December 13, 2009 spill; and…

Even before the Consent Order, Valdosta had already spent almost $50 million since 2009, including building a new wastewater treatment plant (WTP) at Mud Creek, also known as a Water Pollution Control Plant (WPCP):

WHEREAS, on April 15, 2013, the City submitted via electronic mail a list of sanitary sewer projects completed by the City from 2009 to present with a total expenditure amount of $49,453,784 (see Attachment 7), including the renovation and expansion of the Mud Creek WPCP, which was completed in April 2012; and…

So the consent order is about this further work, most of which is completed now:

Years later, the new Withlacoochee WPCP is built uphill out of the floodplain (ribbon cutting 2016-07-12), as is the force main.

For those who keep asking me, yes, the Consent Order does include possibility of penalties:

WHEREAS, Section 12-5-52(a) of the Act specifies that any person violating the Code or any permit condition or limitation established pursuant to the Code shall be liable to the State of Georgia for a civil penalty not to exceed $50,000 per day for each day during which such violations continue; and

GA-EPD waived the fines, instead requiring Valdosta to get on with the sewer system improvements it had already planned.

This does not preclude levying fines for other violations:

This Order does not waive EPD’s authority to take further enforcement action, or imply that EPD will not take such action, if the City (1) fails to meet applicable Permit effluent limits, (2) or the City does not fully satisfy the conditions of the Order, or (3) fully comply with other relevant requirements.

For more detail, see the Consent Order on the WWALS website, including a 2013 newspaper summary of what it means.

I have been reporting on Valdosta (and other) wastewater since 2009. It was one of the reasons WWALS was formed. The very first speaker at a WWALS board meeting after incorporation was Emily Davenport, then the Stormwater Manager for the City of Valdosta. She was assisted by Angela Bray, then of SGRC. Emily has taken a job with Hahira, and Angela is now the Stormwater Manager for Valdosta. For more, see Valdosta (and other) wastewater.