What happened since the August 17th Homerville, GA coffee shop explosion resulting from a leak from an AGL natural gas pipeline, reported as far away as New Orleans, Louisiana and Atlanta, Georgia? The three women airlifted to Shands Hospital in Gainesville, Florida got skin grafts and are recovering, according to occasional updates by one of them on facebook. Let’s all be thankful for their continued recovery.

The Georgia Public Service Commission is investigating the explosion, which may be a good thing, considering this is what the federal Pipeline & Hazardous Materials Safety Administration (PHMSA) knows about that AGL pipeline in Clinch County: 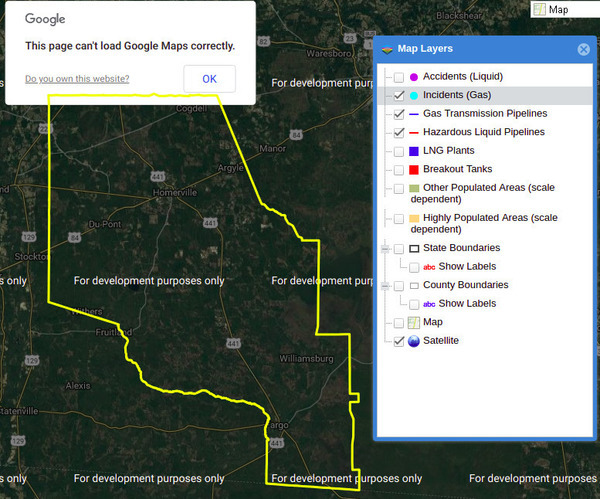 Fire investigators and the Bureau of Alcohol, Tobacco and Firearms determined gas had leaked into a sewer line that had also been breached by the construction crew. The gas seeped through the sewer line into the Coffee Corner, the statement said.

PSC pipeline safety staff is investigating, said the commission’s Bill Edge. They will focus on whether the gas line was properly located and if the excavation was carried out “with reasonable care,” he said.

After investigating, the pipeline staff will put together a recommendation on whether fines are warranted; that report will be forwarded to the full commission, which has the final say in the matter, Edge said.

“It could take a month or two,” he said.

Well, it’s been more than two months, so I called Bill Edge. He said the investigation is ongoing. While it is in process, they don’t discuss details with the public. I noted the VDT said it was expected to be completed in a month or two more than two months ago. He said it was taking longer than expected due to many details to consider. I said I was looking forward to seeing it. He said many other people are, as well.

Once investigations are complete, all Facilities Protection Unit investigation reports are provided to the involved Respondent(s) and are subject to Open Records requests pursuant O.C.G.A. § 50-18-1 et. seq. Please send all requests for access to documentation under the Open Records Act to:

It also has an announcement (from 2014) that Enforcement Actions are now under the Commissions docket system.

There’s no docket for Southern Natural Gas Co. (SONAT), presumably because it’s interstate. But there are dockets for these two:

Bill Edge said GA-PSC’s Pipeline Safety contracts to handle state call-before-you-dig violations, and to enforce federal law for intrastate pipelines. But not interstate pipelines: that’s still PHMSA and FERC (I got my hopes up there for a moment).

According to GA-PSC, Pipeline Safety,

The Georgia Public Service Commission’s (GPSC or Commission) Pipeline Safety Division is responsible for protecting the public and environment from the risks inherent in the transportation of natural gas or other hazardous liquid products. Through an annual certification with the Pipeline and Hazardous Materials Safety Administration (PHMSA), the GPSC enforces minimum safety regulations for all jurisdictional intrastate gas pipelines in Georgia. These regulations are written to ensure safety in the (1) design, construction, testing, operation, and maintenance of pipeline facilities and (2) siting, construction, operation, and maintenance of liquefied natural gas facilities. The GPSC ensures compliance with regulations through operator inspections, enforcement actions, and accident investigations. The Commission’s Pipeline Safety Division does not have jurisdiction over interstate pipelines, liquid pipelines (gasoline, carbon dioxide, etc.), or siting of any underground facilities.

The GPSC Pipeline Safety Staff consists of engineers and inspectors trained by the PHMSA Training and Qualification Program (TQ) in application of the Federal Regulations. Required safety inspections are performed on a minimum five-year basis for the gas systems to ensure compliance with the Federal Regulations. The types of inspections include, but are not limited to, comprehensive inspections, operator qualifications, public awareness programs, system integrity management programs, drug and alcohol programs, and accident investigations.

The GPSC will continue to conduct investigations of all natural gas incidents that result in property damage of at least $50,000. The GPSC will also investigate all incidents that require notice to the Federal Office of Pipeline Safety in accordance the Federal Regulations. These investigations will culminate in written reports and pertinent photographs kept on file at the GPSC, with copies available to the public, upon request.

It continues with an admonition to pipeline operators to report incidents to a list of Pipeline Safety personnel.

Also note that Pipeline Safety’s investigations, according to its own web page, are triggered only by property damage, with no mention of injuries or fatalities. It also says nothing about pipeline operators perhaps needing to pay for hospital bills of people with third-degree burns.