Announced yesterday to press across Georgia and beyond, the titanium mine near Georgia and Florida’s Okefenokee Swamp proposed by Twin Pines Minerals of Alabama made the Georgia Water Coalition Dirty Dozen (see also PDF).

You can still file a comment with the Army Corps and GA-EPD asking them to reject the mine or at least require an Environmental Impact Statement. Convenience for miners is no excuse to risk the fishing, boating, and birding in the swamp and hunting and forestry nearby.

Twenty years ago when chemical giant DuPont proposed mining titanium dioxide ore near the Okefenokee Swamp, opposition to the plan was so strong— from local environmental groups all the way up to the Secretary of the Interior—that the company ultimately abandoned its plans. Now, like a monster in a horror film returning from the dead, a new proposal to mine near the largest blackwater wetland in the United States is on the table. Twin Pines Minerals, LLC has asked the U.S. Army Corps of Engineers and Georgia’s Environmental Protection Division (EPD) for environmental permits that will allow the company to destroy 587 acres of wetlands and 1.4 miles of streams to strip mine on some 2,400 acres of land located within four miles of the Okefenokee National Wildlife Refuge. The longterm health of the Okefenokee and the rivers it feeds now hang on the decisions of these federal and state agencies. 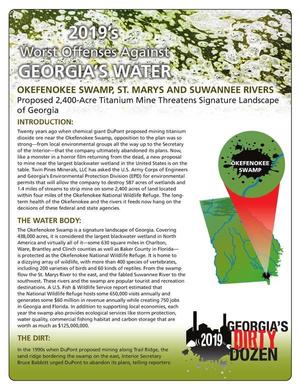 The Okefenokee Swamp is a signature landscape of Georgia. Covering 438,000 acres, it is considered the largest blackwater wetland in North America and virtually all of it—some 630 square miles in Charlton, Ware, Brantley and Clinch counties as well as Baker County in Florida— is protected as the Okefenokee National Wildlife Refuge. It is home to a dizzying array of wildlife, with more than 400 species of vertebrates, including 200 varieties of birds and 60 kinds of reptiles. From the swamp flow the St. Marys River to the east, and the fabled Suwannee River to the southwest. These rivers and the swamp are popular tourist and recreation destinations. A U.S. Fish & Wildlife Service report estimated that the National Wildlife Refuge hosts some 650,000 visits annually and generates some $60 million in revenue annually while creating 750 jobs in Georgia and Florida. In addition to supporting local economies, each year the swamp also provides ecological services like storm protection, water quality, commercial fishing habitat and carbon storage that are worth as much as $125,000,000.

In the 1990s when DuPont proposed mining along Trail Ridge, the sand ridge bordering the swamp on the east, Interior Secretary Bruce Babbitt urged DuPont to abandon its plans, telling reporters:

“Titanium is a common mineral, while the Okefenokee is a very uncommon swamp.” The fight ended with DuPont abandoning its plans and the permanent protection of some 16,000 acres of land originally slated for mining.

Fast forward 20 years and the Department of Interior is now greasing the skids for mining by classifying titanium as a “critical mineral” for the country’s economy and security.

In other words, in today’s political climate, don’t look for a white knight from the Interior Department riding in to stop the ill-conceived mining plan. 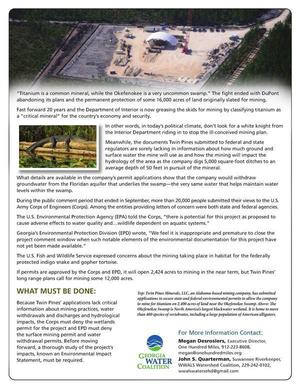 Meanwhile, the documents Twin Pines submitted to federal and state regulators are sorely lacking in information about how much ground and surface water the mine will use as and how the mining will impact the hydrology of the area as the company digs 5,000 square-foot ditches to an average depth of 50 feet in pursuit of the mineral.

What details are available in the company’s permit applications show that the company would withdraw groundwater from the Floridan aquifer that underlies the swamp—the very same water that helps maintain water levels within the swamp.

During the public comment period that ended in September, more than 20,000 people submitted their views to the U.S. Army Corps of Engineers (Corps). Among the entities providing letters of concern were both state and federal agencies.

The U.S. Environmental Protection Agency (EPA) told the Corps, “there is potential for this project as proposed to cause adverse effects to water quality and…wildlife dependent on aquatic systems.”

Georgia’s Environmental Protection Division (EPD) wrote, “We feel it is inappropriate and premature to close the project comment window when such notable elements of the environmental documentation for this project have not yet been made available.”

The U.S. Fish and Wildlife Service expressed concerns about the mining taking place in habitat for the federally protected indigo snake and gopher tortoise.

If permits are approved by the Corps and EPD, it will open 2,424 acres to mining in the near term, but Twin Pines’ long range plans call for mining some 12,000 acres.

WHAT MUST BE DONE:

Because Twin Pines’ applications lack critical information about mining practices, water withdrawals and discharges and hydrological impacts, the Corps must deny the wetlands permit for the project and EPD must deny the surface mining permit and water withdrawal permits. Before moving forward, a thorough study of the project’s impacts, known an Environmental Impact Statement, must be required. 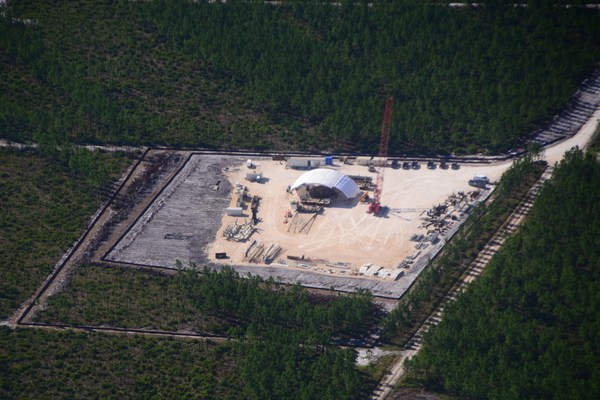 Top: Twin Pines Minerals, LLC, an Alabama-based mining company, has submitted applications to secure state and federal environmental permits to allow the company to mine for titanium on 2,400 acres of land near the Okefenokee Swamp.

Above: The Okefenokee Swamp is North America’s largest blackwater wetland. It is home to more than 400 species of vertebrates, including a large population of American alligators.

Much more about this bad mining application is here:
wwals.net/issues/titanium-mining/

That thirty day deadline is grossly inadequate, especially considering that everyone is advised to stay home for eight weeks or 56 days because of the novel Coronavirus (COVID-19). Plus the entire Twin Pines Minerals (TPM) application is hundreds of pages, and nobody can adequately absorb and analyze all that in thirty days.

While you are at home, you have a great opportunity to write a comment, and to write to your elected officials. You can also post your comments on social media, as op-eds, etc.

In your comment, perhaps you would like to ask for a deadline extension of 120 days, and a public hearing.

You can write to your Georgia state representative or senator or governor or lieutenant governor and ask them to refuse any such instrument.
To find your legislator you can type in your ZIP code here: http://openstates.org/find_your_legislator/
You can also write to your U.S. Representative or Senator and ask them to urge the Corps to reject this mine or at least require an EIS, like Rep. Al Lawson (FL-05) already did.