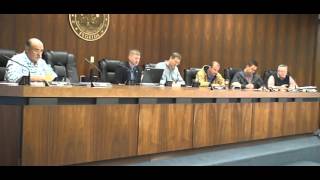 They did fix the two typos, but they didn’t approve or send the letter, as you can see in their own video. Here’s more discussion of why they should send such a letter, and pass another resolution.

Regarding Commissioner Gamble Wainwright’s comment that “my business depends increasingly on energy” OK, but “energy is going to cost more and more money”, sorry, not so. See Piotr Bujnicki and Anna Shiryaevskaya, Bloomberg, 14 December 2015, Natural Gas Falls to Lowest Since 2002 on Mild Weather Outlook,

U.S. natural gas tumbled to the lowest intraday level since January 2002 amid forecasts that mild weather will persist through the end of the month. January futures fell as much as 5.6 percent to $1.879 a million British thermal units on the New York Mercantile Exchange and traded at $1.881 at 12:14 p.m. London time. Gas is down 35 percent this year, headed for its second annual decline.

That’s not just because of the weather. It’s because of a glut of fracked methane.

Solar will be cheaper than traditional grid power in at least some locations in a few years, so any utility looking to keep control of pricing will look more and more at solar. And, if you look at the chart below, you can imagine that the crossover point for 2016 and 2017 PPA contracts will occur even closer in time as equipment prices decline.

Remember, the hard target in-service date for Sabal Trail is May 2016 2017. Why build a white elephant pipeline that will be obsolete by the time it was built?

I do agree with Chairman Bashaw that nobody should apologize for taking time to discuss this issue. However, listening overnight to companies that stand to profit by the pipeline and deciding on that basis isn’t enough. He did finally let local Suwannee County citizen Debra Johnson speak, but only reluctantly. As she mentioned, even another pipeline company, Southern Natural Gas, objects to the excessive number of crossings of its pipeline proposed by Sabal Trail, along with substandard drilling methods.

The liquid natural gas (LNG) export stations she mentioned are in Martin County, Florida, although one of them appears to be licensed to export LNG through Jacksonville, which is gearing up for LNG export, assisted by the same T. Boone Pickens Kinder Morgan has applied to FERC for another natural gas pipeline, from Suwannee County to Jacksonville; the application explicitly says Sabal Trail can connect if it wants to.

As for the less safe LNG trains the Chairman mentioned, Florida is going to get those if it keeps depending on natural gas. Florida East Coast Railway plans and Fortress Investment Group already has U.S. DoE Office of Fossil Fuels (FE) authorization to pick up LNG from FliNG in Martin County and ship it up and down the Florida coast to Miami and Jacksonville. Plus FE authorized the LNG to be exported to all free trade countries.

Transportation of a potentially hazardous material through the Treasure Coast on the Florida East Coast Railway could be increasing tenfold.

Subsidiaries of Fortress Investment Group — parent company of All Aboard Florida and Florida East Coast Railway — within seven years could build, own and operate a liquefied natural gas facility in Titusville, according to a free-trade agreement approved May 29 by the federal Department of Energy.

About 30 billion cubic feet of liquefied natural gas could be transported annually along the 351-mile Jacksonville-to-Miami rail corridor, according to the agreement.

So approving Sabal Trail wouldn’t stop LNG bomb trains: it would promote them.

As for the Chairman’s assertion about natural gas being a bridge fuel, it’s hard to keep up with how fast energy markets are changing. Even Sierra Club believed that as recently as a year or so ago, but not anymore. Chris Burger, Sierra Club Atlantic Chapter, 27 October 2014, Fracking: Chapter helping shape National policy,

National was promoting natural gas as a “bridge fuel” and supported hydrofracking as an accepted means of extraction. The Sierra Club was not alone. All the major national environmental groups were singing the same tune.

Atlantic Chapter representatives (including yours truly) made several treks to National’s headquarters in San Francisco to clear up misinformation among our leaders about the hazards of fracking. National began to listen to its grassroots constituency. Meanwhile, a new executive director was chosen (Michael Brune) and he was very sympathetic to our cause. That same spring issue of Sierra Atlantic had a message from Michael in which he announced the end of the Club’s relationship with the natural gas industry. The Club would no longer refer to gas as a “clean” fuel that was expected to replace coal, and all mention of “bridge fuel” was removed from the Club’s energy policy.

The Chairman mentioned the Crystal River nuclear plant closed. He didn’t mention that was because it was broken and nobody was willing to pay the exorbitant cost of fixing it, although the citizens of Florida now are stuck with paying a long time for closing it down. He also probably doesn’t know that even before Crystal River closed, Google bought for about $1 billion more sun and wind power than the new nuclear plants Southern Company is building would produce, and that’s for less than the cost overruns on those Plant Vogtle nukes.

Since Southern Company (SO) recently embraced solar power, when SO CEO Tom Fanning said its customers wanted to buy solar, so he’ll sell it to them, SO’s Georgia Power has turned Georgia into the fastest-growing U.S. solar market. Even SO’s Alabama Power wants its Public Service Commission to approve more solar power because its corporate customers want it.

Each of the three new plants is being designed for roughly 74 megawatts of capacity. These plants, along with several community-based, small-scale solar arrays and commercial-scale solar research installations that FPL is building, will combine for a total of more than 225 megawatts of new solar capacity by the end of next year. This will effectively triple FPL’s solar capacity, which currently totals approximately 110 megawatts.

The Chairman said Mr. Evans of the U.S. Army Corps of Engineers told him nobody but a bunch of foreigners using form letters and WWALS had commented in the extended comment period. Well, look again, Mr. Chairman, and I think you’ll find extensive comments filed Friday by other organizations, plus another comment letter from WWALS.

Regarding taxes, the Chairman didn’t take into account the devaluation of Suwannee County citizens’ land due to a pipeline or compressor station on or near their property. He said the county wouldn’t have to provide Sabal Trail any land, but Suwannee County citizens certainly would. The Suwannee Board of County Commissioners should represent its citizens, not a pipeline company from Houston, Texas.