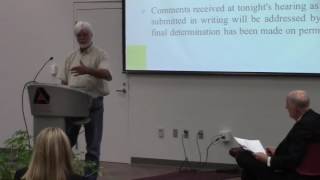 You don’t have to hire an attorney; you can send in written comments by tomorrow, May 8, 2017, according to the the GA-EPD announcement of March 31, 2017:

Written comments are welcomed. To ensure their consideration, written comments should be received by close of business on May 8, 2017. Please address written comments to the address listed below, or via e-mail at EPDcomments@dnr.ga.gov . If you choose to e-mail your comments, please be sure to include the words “NPDES Permit Issuance—Georgia Power Company—Plant Mitchell” in the subject line to ensure that your comments will be forwarded to the correct staff. The permit application, draft permit, comments received, and other information are available for review at 2 MLK Jr. Drive, Suite 1152E, Atlanta, GA 30334, between the hours of 8:00 a.m. and 4:30 p.m., Monday through Friday. Please bring this notice to the attention of interested persons.

Sierra Club’s Mark Woodall expressed his outrage that Georgia Power and GA-EPD had squelched the coal ash bills in the legislature. Woodall and Suwannee Riverkeeper John S. Quarterman will be at the Southern Company Stockholder Meeting May 24, 2017 in Pine Mountain to say a few words about this to SO CEO Tom Fanning. Deacon Leeann Culbreath spoke for Georgia Interfaith Power and Light (GIPL), as she did at the two coal ash meetings she organized in Tifton and Valdosta. The last citizen speaker was Tom Potter, Chair of the WWALS Science Committee, before Georgia Power representative Aaron Mitchell told us how Georgia Power wouldn’t be doing whatever it is they’re doing if they didn’t feel it was right, and they would eventually let us know what it is. Which is not how this should work: all of us are at risk from the coal ash Georgia Power has generated, so all of us should have a say in what is done with it.

Georgia Power proposed to convert Plant Mitchell from coal to biomass, but ended up closing it. That leaves coal ash ponds that have to be dewatered and the coal ash put somewhere for long-term storage. Power companies like to ship coal ash to local landfills; for example the landfill in Lowndes County Georgia accepted coal ash from TVA and from Florida. There is no dewatering plan for Plant Mitchell on GA-EPD’s coal ash information page.

Here are links to each WWALS video, followed by a WWALS video playlist.