Gainesville, Florida, December 23, 2017 — Suwannee Riverkeeper met Chris Newton of Holly Hill, Florida, half way to Daytona Beach to deliver the kayak he won in a WWALS raffle. Back in October at Suwannee Hulaween, Chris got one raffle ticket, and that was the winning ticket. When the Riverkeeper called him, he wanted to know if someone had found his keys. When he heard what he was getting, “No way!” he said. But we found a way to get him the Trio-11 kayak generously donated by Malibu Kayaks.

Chris didn’t answer when we called from the top of the Suwannee River.

When Suwannee Riverkeeper John S. Quarterman met Chris and his crew halfway to Daytona Beach, in Gainesville, Florida, to deliver the kayak, they were still recounting the second call when Chris did answer. END_OF_DOCUMENT_TOKEN_TO_BE_REPLACED

Hahira, Georgia, December 13, 2017 — People got kayak raffle tickets for three months at festivals from Alapaha, Georgia to Live Oak, Florida, and online, until the drawing at a Suwannee Riverkeeper outing Sunday at the top of the Suwannee River in the Okefenokee Swamp. The lucky winner of a kayak donated by Malibu Kayaks is Chris Newton from the Atlantic coast of Florida. “No way!” he said. 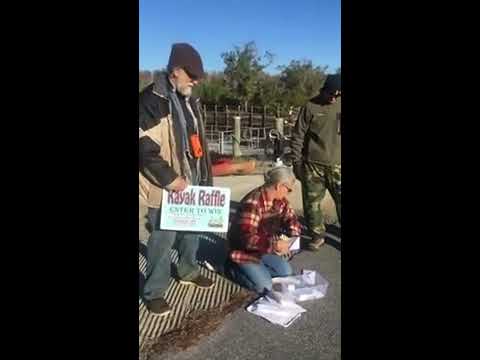 WWALS board member Shirley Kokidko of Pearson, Atkinson County, Georgia, had the video camera at END_OF_DOCUMENT_TOKEN_TO_BE_REPLACED

Shirley Kokidko at the WWALS Okefenokee Outing, Sunday, December 10, 2017, refocused the camera on the proceedings. Then more ticket sources: END_OF_DOCUMENT_TOKEN_TO_BE_REPLACED

You may have seen this kayak at the Brooks County Skillet Fest, the Berrien County Harvest Fest, the Alapaha Station Celebration, the Hahira Honeybee, or Suwannee Hulaween, and now there are only a few days to get a raffle ticket for it, before we draw the winner 9AM this Sunday in the Okefenokee Swamp on the monthly WWALS paddle outing.

You can put your donation in online and get your kayak raffle tickets. All proceeds go to support the work of WWALS Watershed Coalition, because Malibu Kayaks generously donated the kayak.