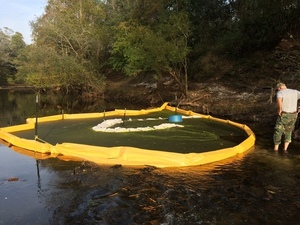 Hahira, GA, November 13th 2016 — Apparently Sabal Trail continues to leak drilling mud into the Withlacoochee River, three weeks after it admitted to GA-EPD that its pilot hole under the river had leaked up into the riverbed.

WWALS members Deanna and Chris Mericle went to the US 84 bridge between Quitman and Valdosta, Georgia, and walked up the river to the site, about 2000 feet upstream. You can clearly see the water inside Sabal Trail’s turbidity curtains is not the same color as the river water.

“I am so angry because this is what we said would happen and we were assured the rivers wouldn’t be affected because they were drilling under them. The head woman at FDEP said exactly that! We told them it was likely because of our karst geology and we got patronized and patted on the head. You can guarantee they will downplay it and just drill another hole. I am pissed,” said WWALS member Deanna Mericle, who drafted the WWALS petition for last year’s four-month legal case and three-day hearing in WWALS v Sabal Trail & FDEP. 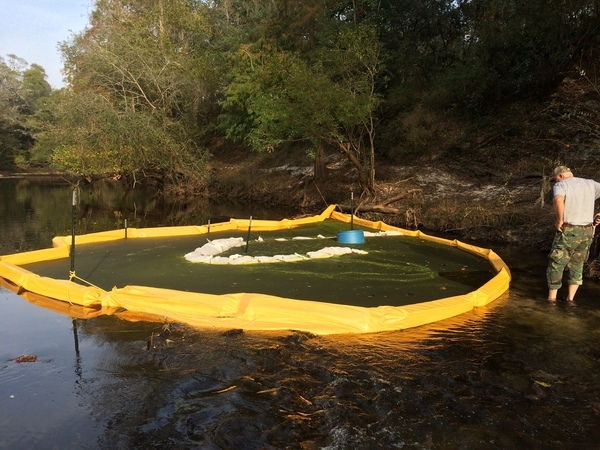 WWALS president John S. Quarterman said, “Remember, this crack up into the river bottom was caused just by Sabal Trail’s pilot hole, not its full-fledged Horizontal Directional Drilling (HDD) borehole. How much more damage will that cause? And what other crevices in other directions also occured that we don’t know about? Will somebody find out when it comes up in their water well?”

People ask what harm can a crack like that cause? The bentonite in the drilling mud can deplete oxygen in the river water and adversely affect fish that live in the river. 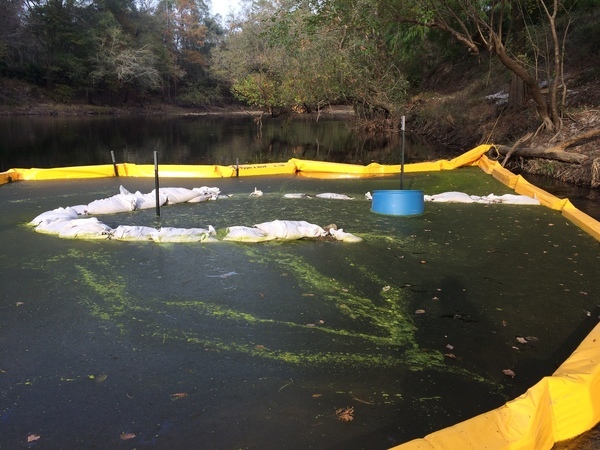 The river water itself is a problem if it gets to a water well or a water treatment plant City of Valdosta 2015 Water Quality Report,

The Upper Floridan Aquifer in the area of Valdosta and Lowndes County is known as a karst aquifer. This is an aquifer that has cracks, underground solution channels and caverns. These cracks can provide a route to allow contaminants to enter the aquifer, move about in the aquifer and alter the water supply, which can cause special challenges for the city’s water system. Just north of Valdosta, one of these cracks is located beneath the Withlacoochee River. The underground crack has formed a sinkhole in the streambed of the flowing river. The river loses about 20 cubic feet per second (cfs) during the wet season and two cfs during the dry season to the aquifer below the sinkhole. The surface water contains tannic acids and organics from vegetation growing along the river. This mixture of water and organics causes a unique situation for all Upper Floridan Aquifer users in this area.

The Valdosta Water Treatment Plant — comprised of seven well fields, with two additional well fields coming online by the end of the summer —is located a few miles northeast of the city and several miles away from the sinkholes that open into the aquifer. The water in the aquifer moves very slowly through the limestone, and measurements have shown the travel time from the sinkhole to the well field to be as much as 75 years. However, the water from the wells does con—tain some of the organic material, as well as naturally occurring sulfides, iron and manganese from deposits scattered throughout the aquifer.

This extremely slow travel time combined with the fact that groundwater in the aquifer at the Withlacoochee HDD crossing moves to the west, away from Valdosta, makes it impossible that contaminated water entering the Floridan aquifer as a result of the HDD crossing, could contaminate Valdosta’s wellfield.

Madison County, Florida, to the southwest of that HDD site, in June asked the Army Corps to investigate that “impossible” claim, but the Corps refused and issued a permit for Sabal Trail.

Sabal Trail also told a judge in WWALS v Sabal Trail & FDEP last fall that drilling mud could not leak up into the Suwannee River because the HDD was too deep under the riverbed.

As mentioned above, Sabal Trail’s Karst Mitigation Plan and Characterization Study anticipate the potential for such issues and provide proactive avoidance measures as well as appropriate, industry standard mitigation protocols.

Quarterman added, “So this is your “proactive avoidance measures”, Sabal Trail? Put a curtain around it and let it leak for three weeks with no end in sight? FERC, Army Corps, FDEP, and GA-EPD, you all believed Sabal Trail. Now what are you going to do?”

Here are some organizations you can complain to.