East on I-10 just before I-75 southbound crosses: a 74.5 MW FPL solar farm in Columbia County, Florida, well along in construction. I don’t think any newspaper ever called the Sabal Trail fracked methane pipeline a windfall: 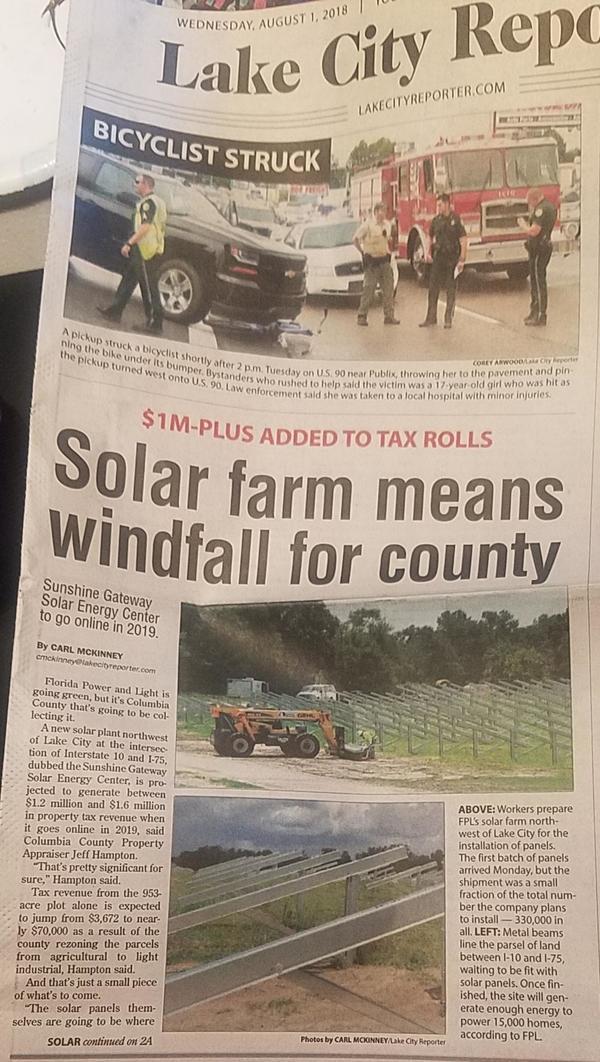 Solar photos: Carl McKinney, Lake City Reporter. Sorry I forgot who sent me this picture of the newspaper front page.

The four new plants, which are expected to be operational by early 2019, are: 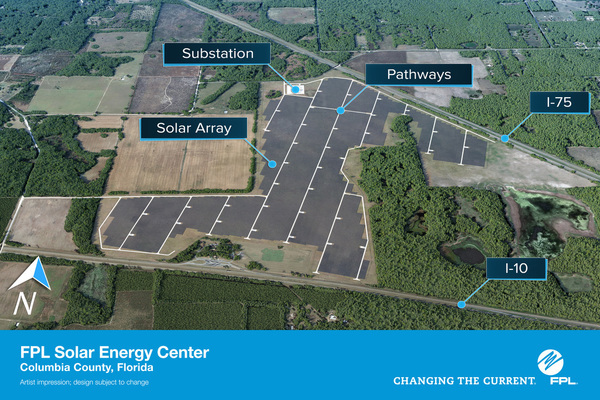 “Florida is leading the nation in implementing solar energy affordably,” said Eric Silagy, FPL’s president and CEO. “FPL is among the cleanest energy providers in the nation not because of governmental mandates or requirements, but because we’ve been committed to making smart investments in clean energy technologies for years. And we’ve proven that it’s possible to be both clean and reliable while keeping our customers’ electric bills among the lowest in the nation.”

According to a recent report from GTM Research and the Solar Energy Industries Association, Florida has installed more solar capacity in 2018 than any other state except one.

According to the Columbia County Property Appraiser, FPL owns pretty much all of the land in the angle between the interstates except for the rest stop. 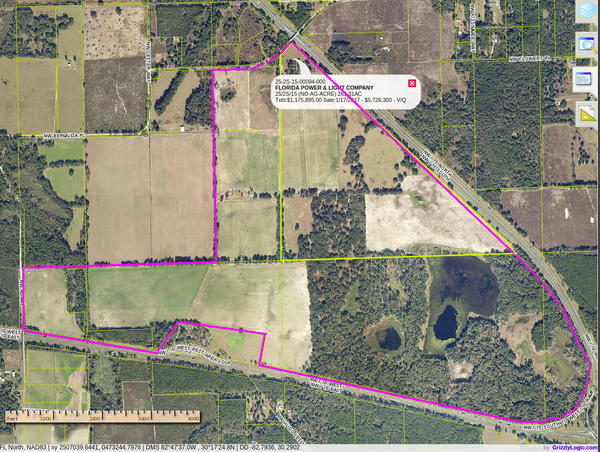 According to USGS HUC maps, these parcels all drain to the Suwannee River, presumably somewhere near White Springs, although it’s quite difficult to trace any creeks all the way between.

FPL calls it the FPL Sunshine Gateway Solar Energy Center, on with ~330,000 solar panels on 953 acres, generating 74.5 MegaWatts of electricity.

The solar plant generates zero-emissions electricity for FPL customers — enough to power approximately 15,000 Florida homes and equivalent to removing approximately 12,000 cars from the road each year.

This is the same FPL that only a few years ago was telling local counties that Florida is too cloudy for solar power. The same FPL that is wasting $3.5 billion of its customers’ money on the Sabal Trail fracked methane pipeline.

Well, at least FPL is finally building solar farms and admitting all this:

Universal solar energy centers are virtually silent, require no water for operation or maintenance, and solar arrays sit low to the ground. A solar center does not require staff to operate so it won’t bring more traffic to the area after construction.

Like all good neighbors, we work hard to minimize impacts from construction, which is expected to last about six to eight months.

FPL’s new solar plants are designed to result in no net cost for customers by generating savings on fuel and other costs to offset the cost of construction over their operating lifetime.

The proposed FPL Sunshine Gateway Solar Energy Center could create about 200 jobs during construction, which in turn will provide an economic boost to local businesses.

I happened to pass by there on September 4, 2018, and took a few pictures. 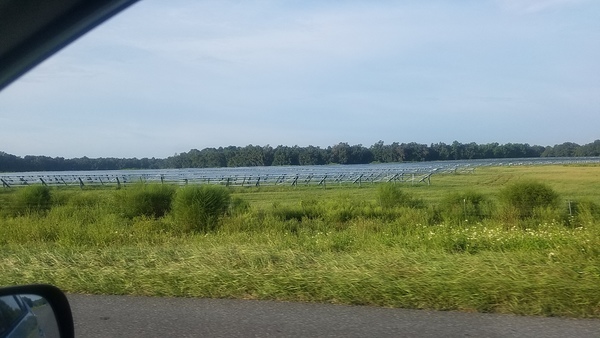 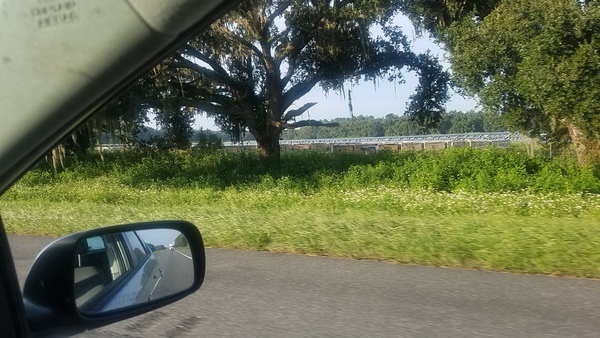 It takes six to eight months to construct an FPL solar farm.

So it could be complete as early as January 2019.

This Columbia County solar farm is about five miles east on I-10 from FPL’s Echo River Solar Energy Facility in Suwannee County.

Next: FPL’s solar farm in Union County, which is more controversial.