What if a sinkhole develops years later under the proposed pipeline in south Georgia or north Florida, 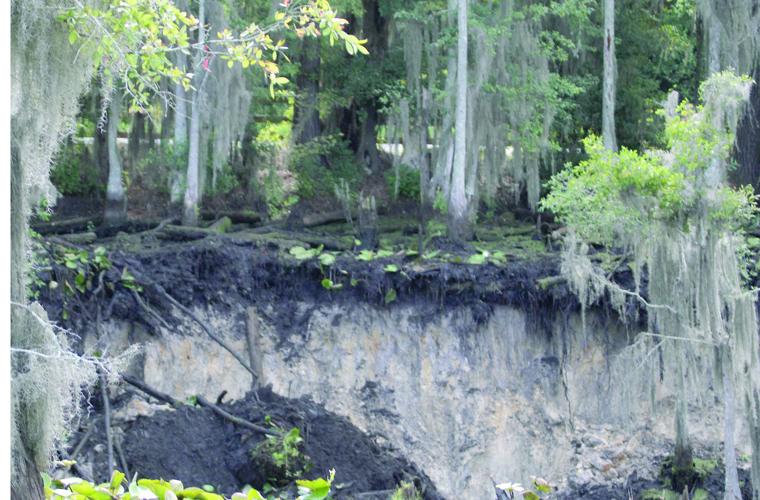 and Sabal Trail declares force majeure and doesn’t pay, like FGT did in Louisiana in 2013?

Numerous news stories are linked in the LAKE blog post, but let’s pick just one.

Winnie Wright is familiar with Lowndes County sinkholes; she reported from Cherry Creek Sink 26 November 2014 about the Sabal Trail pipeline on the Georgia Water Coalition Dirty Dozen 2014. That’s on the same Lowndes County-owned property with Shadrick Sink, which leaks into the aquifer, causing Valdosta years ago to have to sink its water wells twice as deep to get under that Withlacoochee River water. Shadrick Sink featured in the Atlanta Journal Constitution’s reporting about Sabal Trail.

And this “fault line” the county clerk mentioned: Yes, McCormick’s property on Norman Hall Road, the Cherry Creek and Shadrick Sinks on the Withlacoochee River, Shiloh Road, and Snake Nation Road are all more or less in a line east to west.

But that’s not the only crack in the fragile karst limestone containing our drinking water Floridan Aquifer. VSU’s Lake Louise research station on Touchton Road just north of Lake Park is a sinkhole, not to mention probably most of the lakes around Lake Park. You only have to glance at a map to see such lakes continue westwards to the Withlacoochee River. And Spectra Energy from Houston, Texas proposes to gouge its hundred-foot right of way for its 36-inch Sabal Trail fracked methane pipeline right through that area. What happens if pipeline construction causes a sinkhole?

What if it’s not immediate? What if it sinks years later in a drought after water pumping nearby? Sabal Trail’s Andrea Grover told me that they have insurance, despite what Spectra Energy’s annual filings with the SEC say. But has the county confirmed that? What if Sabal Trail declares a sinkhole a force majeure (act of God) event, which is insurance lingo for ain’t our problem, like Florida Gas Transmission (FGT) did for the infamous 25-acre sinkhole in Assumption Parish, Louisiana in 2013? What will Lowndes County do then?

What will any county in south Georgia or north Florida do if they let Sabal Trail in and a sinkhole develops under that pipeline?