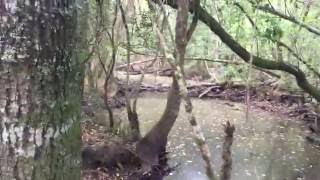 Patrick wrote about this video:

A WWALS member investigates the accessibility of the Alapaha River from the established internal roads within “The Pasture” hunting club that has been purchased by the State of Georgia for a habitat for the Indigo Snake and Gopher Tortoise, both protected species.

The Alapaha WMA is open for hunting and other use, since October 1st 2016. For where the WMA is and where Deserter Lake is, see previous post. Here are approved hunting season dates for the Alapaha WMA, found in other Alapaha WMA information. Bag limits are presumably the same as for the rest of Georgia.

SportFish says Deserter Lake is a great place for anglers to land that monster fish..

We hear that “it is told that a couple of local soldiers who grew tired of the carnage of the Civil War deserted to to hide out until the end of the war.” Does anybody have any further information on that?