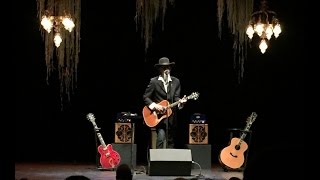 And don’t forget WWALS has an outing 10AM this Saturday December 10th at Georgia’s Stephen C. Foster State Park on the Suwannee River near Fargo, GA, to paddle into the Okefenokee Swamp.

During the early 1940’s naturalist Francis Harper borrowed recording equipment from The Library of Congress and documented inhabitants of Southeast Georgia’s Okefinokee Swamp performing various traditional songs, shaped-note singing and hollers. Hollers were melodies sung by lone hunters or farmers to alert those at a far destination as to whom was returning. This performance is an interpretation of two of such hollers.

Over the past three decades, Walter Parks has forged a distinctive international career as the lead guitarist for Woodstock legend Richie Havens, half of the folk-duo The Nudes, and guitarist and leader of the swamp/blues-outfit Swamp Cabbage. His original music is inspired by the swampy gospel blues that wails from storefront churches and roadhouses in and around the southeast Georgia low country.