We went to Rum 138 to see Merrillee Malwitz-Jipson, when Janet Barrow and I needed to know about the early move of the Sabal Trail pipeline off of the Ichetucknee River. Merrillee, Janet, and I are writing a book about five years working together promoting solar power and opposing that hazardous fracked methane boondoggle.

Three laptops and mounds of paper were used. Almost three months later, we’re still digesting what Merrillee turned up out of her archives. Things we didn’t realize about fossil fuel feints and many solar successes are becoming clear as we compare notes.

Merrillee’s halo seems to be slipping in this picture, and my hat fell off:

The real instigator of this book is seen in the red here, holding the Suwannee Riverkeeper banner, in Tallahassee, while Merrillee spoke at Hold Regulatory Agencies Accountable for Sabal Trail and FSC fracked gas pipelines 2017-01-23. Laura Fillmore, our agent: the book was her idea. 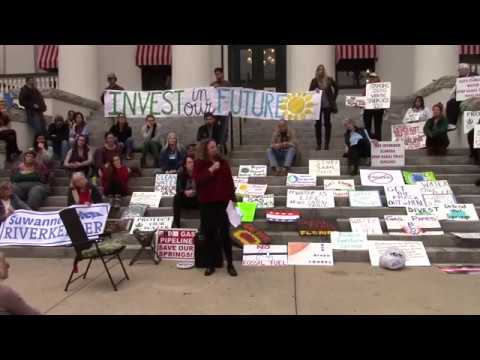 Well, Laura and I worked on a book thirty years ago that sold tens of thousands of copies, so who knows? Maybe this one will, too. This one even includes the story of how a graph I published convinced Jeff Bezos to start Amazon (according to his biographer). However many copies it sells, the book needs to be written. So we’re writing it.

Merrillee, Janet, and I have been at many events together, in Live Oak, Dunnellon, and beyond, opposing that pipeline invasion and its liquid natural gas (LNG) export offshoots, while promoting solar power. That event in Tallahassee is the only one at which Laura has joined us (so far).

We the co-authors are very aware that a cast of thousands or millions is involved in this work of getting on with getting off of fossil fuels and onto renewable sun, wind, and storage power. We are contacting some of you, but there’s no way we can include everything everybody did, or it would be an encyclopedia of thousands of pages, not a reasonably-sized trade book. We happen to be the three who chose to write this book, so we’ll do the best we can.

The book ties local actions to the big picture. It took only a decade or two to shift from horses and buggies to automobiles, once Henry Ford came out with the affordable Model T. A century later, solar panels are now cheaper than coal, oil, gas, or nuclear, and the solar industry employs more people producing electricity than coal, oil, and gas combined. All that, plus solar panels do not leak or explode, don’t take land through eminent domain, and don’t pollute our air or water!

The Tesla Model 3 in one year went from zero sales to selling more than any other electric vehicle in the United States. The CEO of General Motors just called for federal electric and zero-emission vehicle policies after calling Tesla “very capable competition and that’s what kind of drives us” just after GM expanded production of its own electric Bolt which it found more popular than it expected, while announcing many more models. Ford, the company that started the automobile revolution a century ago, has finally waked up and is working on its own all-electric vehicles, as are most other car makers worldwide. The Wall Street Journal and Forbes love to say the Tesla Model 3 is no Model T, and indeed the Model 3 is still not down to its intended $35,000 price. Yet the Model 3 now has the fastest-growing production and sales in history, beating the Model T.

[Disclosure: from time to time I do own Tesla or Ford stock, and if GM keeps on like that, I will probably buy GM, too.]

As we discovered that January 2017 in Tallahassee, most people, even people working to speed the change to renewable energy, don’t know that solar power is ready right now, and growing like compound interest, like smartphones, like personal computers, like the Internet. Pipelines are the dying fossil fuel industry’s attempt to cash in on a glut of gas from fracking before their debt-fueled Ponzi scheme goes belly-up.

We figure the more people who know these things, the faster this sea-change from 20th-century fossil fuels to 21st-century solar, wind, and storage power will happen.