“If you see it, it’ll break your heart. In a deadfall it all gathers,” Valdosta Mayor Scott James said to me on his radio show about trash in Sugar Creek, just above the Withlacoochee River, where it washes downstream into Florida and the Suwannee River, onwards to the Gulf. We discussed how the problem has been documented by the City of Valdosta since 2010, and some inexpensive solutions.

Scott James reminded me that after the May 15th Pop Up Paddle on the Withlacoochee River from Langdale Park to the Salty Snapper for lunch he and a few people paddled again in early July, and his buddy caught some bass.

Later in that same radio interview, August 12, 2021, Scott James asked if there was anything else I wanted to mention.

Why yes, the 2010 Valdosta Stormwater Master Plan, available on the city’s own website.

The second major issue influencing this stream is the poor water quality. Trash, sewage and sediment all compromise the quality of Sugar Creek. The generation of excess sediment can be managed by controlling incision as described above. During the field work, the team noted that nearly every manhole along the stream was leaking and the distinctive odor of raw sewage was pervasive. Patches of brownish foam were common near sewer pipes.

I mentioned that part highlighted above, and said I was sure they were fixing all that. (I didn’t say we were watching like hawks, because he knows that.)

The trash sources include roadside ditches and direct dumping into the stream. The trash load in this stream is exceptionally high, and includes used diapers, kitchen garbage, bedding, furniture, electrical wires and scrap metal. In some reaches it was not possible to assess the bed material due to the thickness of the garbage layer.

I said we could attest to all of that. I noted: “It doesn’t mention lots and lots of styrofoam, and cans, and bottles….”

The Mayor continued that thought:

“…and coolers, and what else have I seen down there? It’s atrocious! It’s absolutely atrocious. WWALS is the main effort. We’re a secondary effort.

But people, I’m gonna say this plainly. You’re the first effort. It’s your litter. It’s your water bottles. It’s your everything that’s now getting washed to the streams, or thrown in the streams.

There was an interruption on the radio you can’t hear on the WWALS video, about somebody wanting to talk about an upcoming play.

“Maybe we should do a play about this,” I suggested.

“Maybe we should,” agreed the Mayor.

The real trash problem: the companies that make it

I continued, “Sure, people shouldn’t litter. But what about all the companies making all that single-use trash. Why do we actually have to have so many styrofoam drink cups designed to be thrown away. And there are at least six states that still have bottle deposits for cans and plastic bottles. If we had those in Georgia and Florida, we’d have a lot less of this stuff.”

I agreed, “Who actually needs plastic bottled water. Which, by the way, Nestlé — Oh, I’m sorry, BlueTriton as they call themselves — suck up right next to Madison Blue Spring, and the Suwannee River Water Management District just gave them a permit to suck more out near the Santa Fe River. Why exactly should we the people — it’s all the same Floridan Aquifer here, whether you live in Georgia or Florida — why should we be subsidizing a Swiss company to make profit off of polluting our streams with plastic bottles?”

It all comes back full circle. If you see it, it’ll break your heart. In a deadfall it all gathers. It’ll really come to break your heart when you see how much gets into our waterways, whether it washes off, whether it’s thrown in….

“Here’s a picture,” I said, “out of this same Stormwater Management Plan, so you can see this problem was well-known….”

“Toss in a couple of tires for good measure,” said the Mayor.

I noted we hadn’t even looked at that West Magnolia Street location yet.

The Mayor went back to his early July paddle on the Withlacoochee: “There wasn’t a single deadfall on the week that I took. Remember on our trip there was five, and we had to cut our way through, and every one of the deadfalls had garbage gathered at it. There was not a single one on the trip that Thomas and I took.”

I answered, “That’s because (a) the water was so high you floated over them, and (b) when it gets that high all that washes downstream into the Suwannee, all the way into the Gulf. So yet another way that Valdosta is sending stuff to Florida.”

I don’t think the Mayor liked hearing that, but he couldn’t deny it.

I read the part I’ve highlighted below about a “trash collection device”. from that same 2010 Plan (in 4.5.4 Water Quantity Problem Areas).

Refer to Appendix I for Baytree Road Culvert for a proposed design for a trash collection device near Sugar Creek.

That Appendix I is not on the city’s website, but Valdosta Stormwater Manager Angela Bray sent it to me when I asked her, and I have put it on the WWALS website.

Valdosta did build one of those, at the west end of Baytree Road, above Lake Sheri.

Angela told me they had to replace the PVC intake pipes with steel, which cost some tens of thousands of dollars more.

On the radio, I discussed with the Mayor that there are much less expensive trash traps nowadays, which can be picked up and carried. They’re kind of like a cage of chicken wire with a couple of arms splayed out in front to gather the floating trash. They do not require a truck to clean it out. People can shovel the trash out of the trap. 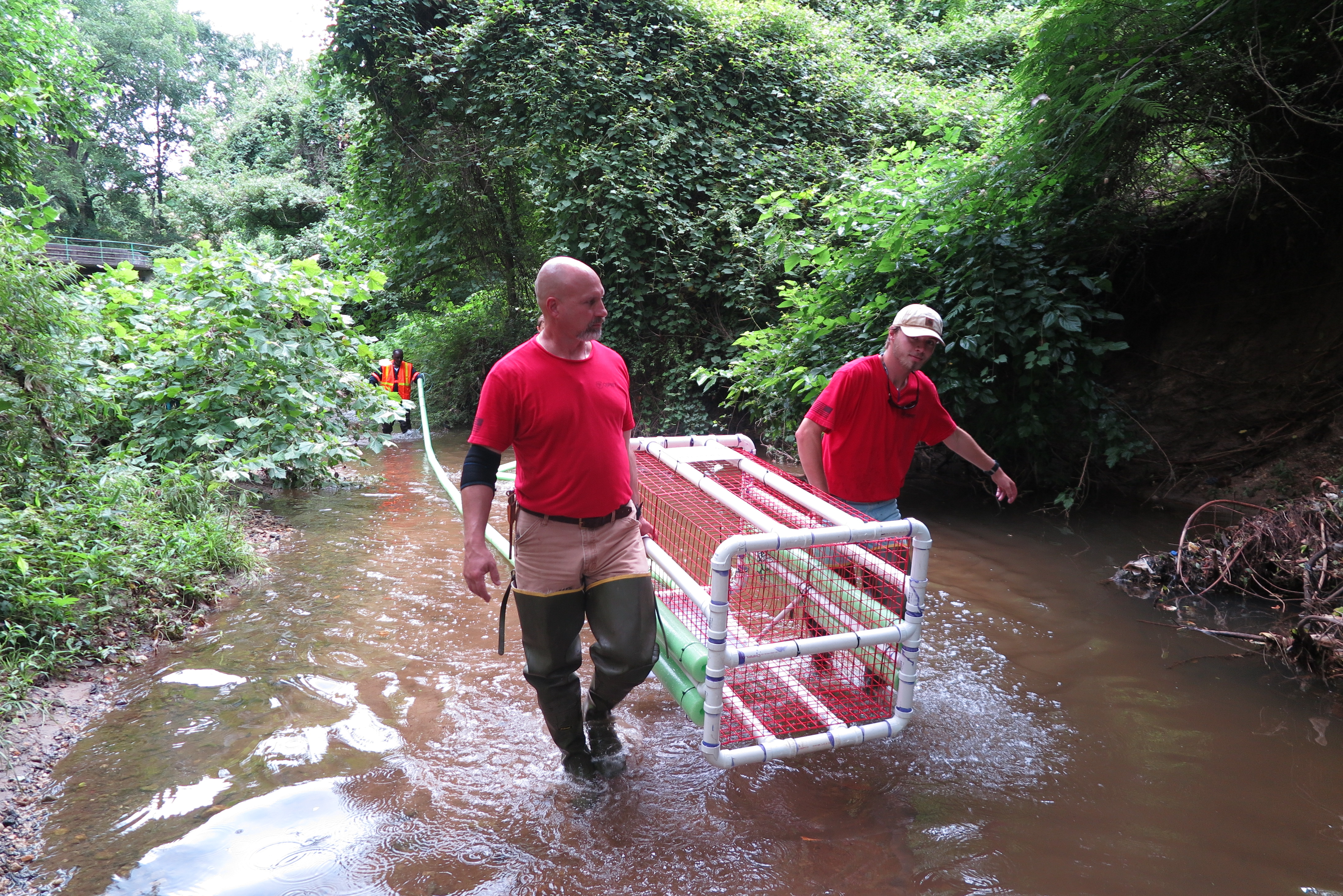 I didn’t get a chance to show him this picture.

That appears to be the same Sugar Creek deadfall garbage raft just downstream of Twomile Branch that Bobby McKenzie and Russell Allen McBride and I and others have cleaned up at least four times this year.

Back in that same 2010 Water Quality section:

Streams are a natural attractor for children and play structures occur along the stream edge. The pollution in this stream poses a serious risk of disease and injury and children should be strongly discouraged from playing in the stream until the trash and sewage are eliminated.

So, according to the City of Valdosta back in 2010, trash in streams is a public health problem.

The next paragraph says:

The leaking manholes and sewer pipes should be repaired immediately and protected from future damage. The garbage should be removed from the creek and an education and enforcement program to prevent further pollution should be implemented.

Does “immediately” mean more than a decade later?

Well, as you can see, Valdosta already has a Plan. WWALS is just encouraging them to implement it. More on that in further blog posts.