The just compensation for property takings required by the Fifth Amendment is not “just” compensation, said Scott James. And a jury of peers of a landowner told Sabal Trail to pay up five times what it offered for an easement for its fracked gas pipeline.

“…nor shall private property be taken for public use, without just compensation.”
—Fifth Amendment, U.S. Constitution

Scott said this jury award was big news and asked if it was just compensation. I said yes, front page in the Valdosta Daily Times. 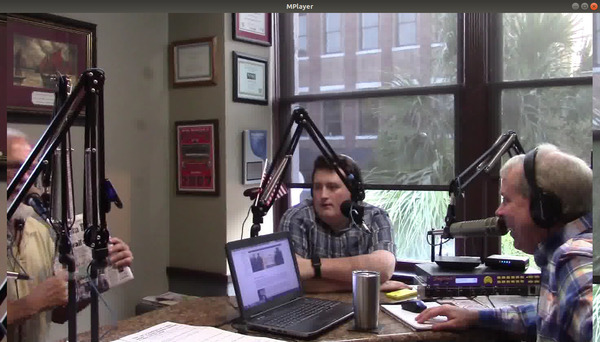 All this for a $4 billion boondoggle to cash out before the entire fossil fuel industry goes belly-up. The customers of Florida Power and Light (FPL) are footing that $4 bill. Meanwhile, FPL’s parent company, NextEra Energy, bragged at length in its Q1 2017 Earnings Call this January about being a world leader in sun and wind power, while mentining Sabal Trail in only one paragraph. In its Q1 2018 Earnings Call, NextEra didn’t even mention Sabal Trail. Both FPL and Duke Energy, another Sabal Trail partner, are building solar farms all over Florida, as Southern Company has been doing in Georgia for years now. Coal is dead, natural gas is next, and sun and wind power with batteries have already won. 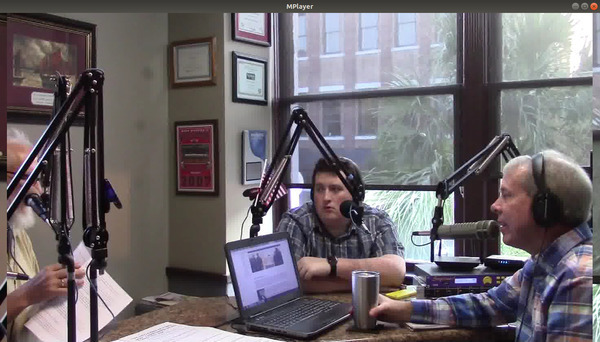 Scott James asked yesterday if I could appear on his show 7AM this morning, so there was not time for an announcement. Instead, here’s the video of a quite long interview, including additional material between the two on-air segments.

Jim the intern asked me who funds the Federal Energy Regulatory Commission (FERC)? 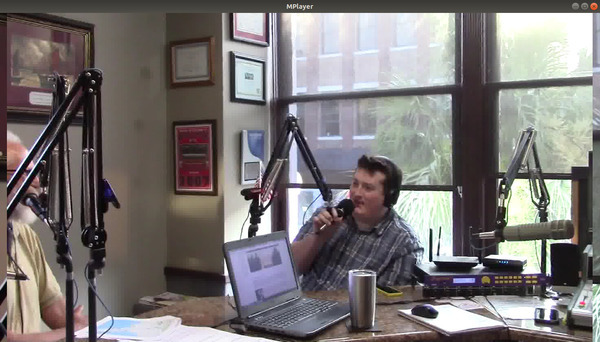 scratched his head over being about as federal as the Federal Reserve, bragging in its budget request every year about paying back 100% of its Congressional allocation from fees and charges on the same industries it supposedly “regulates”. 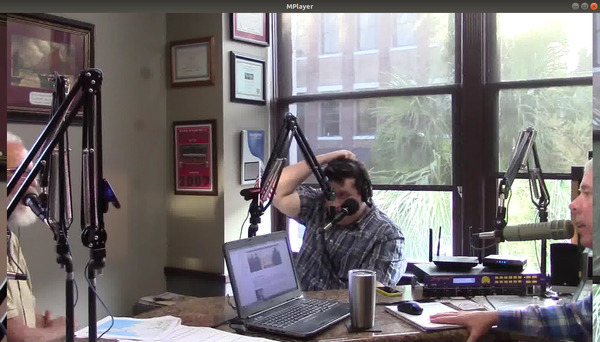 The Federal Energy Regulatory Commission (FERC or the Commission) recovers the full cost of its operations through an – nual charges and filing fees assessed on the industries it regulates as authorized by the Federal Power Act (FPA) and the Omnibus Budget Reconciliation Act of 1986. The Commission deposits this revenue into the Treasury as a direct offset to its appropriation, resulting in a net appropriation of zero. 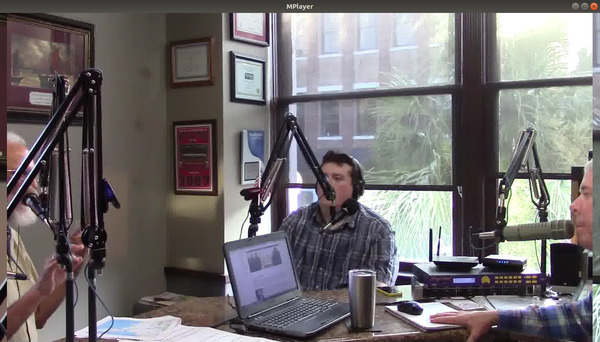 FERC quote regulates the companies that fund it

Scott asked me about the pipelines on my property. We discussed that a bit, and I pointed out many people probably think Sabal Trail doesn’t affect them because it doesn’t go through their property. But if they drive down I-75, liquid natural gas (LNG) does. Pivotal LNG (now owned by Southern Company) has three liquefaction plants in Georgia and one in Alabama, all with contracts to send LNG to Jacksonville, Florida by truck. The most obvious route is down I-75 past Lowndes High School where I went to school and past Wiregrass Tech. 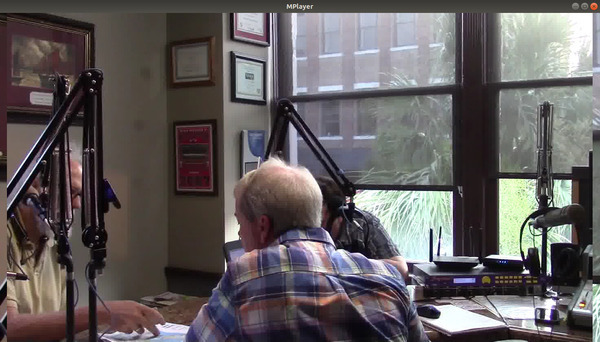 Pivotal LNG down I-75 from Georgia to Jacksonville, FL 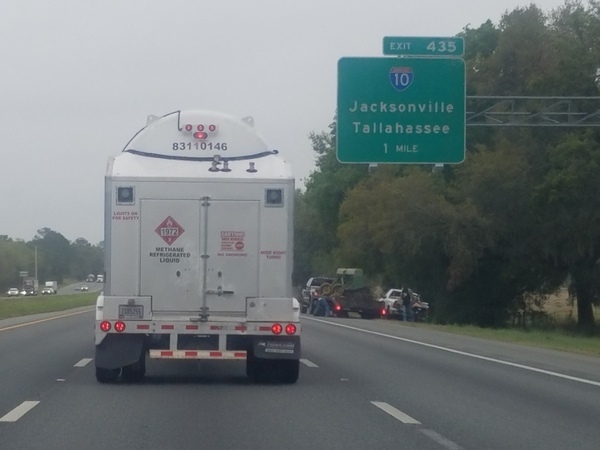 LNG truck turning from I-75 onto I-10 for Jacksonville.

So while all the pipeline companies claim they have to do pipelines or trucks will be used, trucks are being used right now. And two LNG export facilities, Strom, Inc. in Crystal River, Florida, and Floridian LNG (FLiNG) in Indiantown next to Lake Okeechobee, will get their gas from Sabal Trail if they’re built. 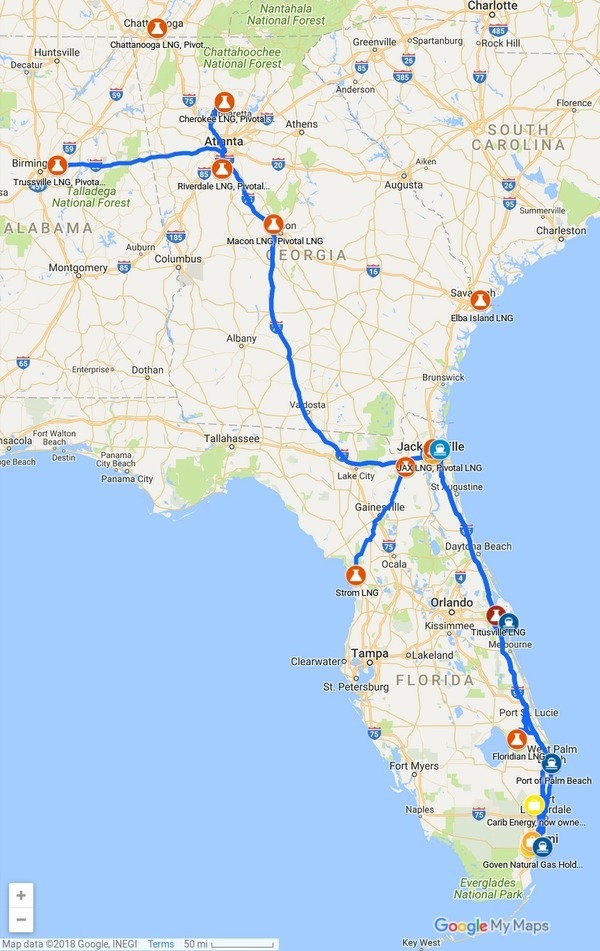 Map by WWALS of LNG terminals in Alabama, Georgia, and Florida, with likely truck routes.

I noted we are lawyered up to sue FERC for shirking its LNG oversight duty, ready to go as soon as we raise enough funds.

Scott said he and family had recently paddled from Red Roberts Landing down to Reed Bingham State Park Lake. I invited him to next year’s BIG Little River Paddle Race. He said he would come. I reminded him don’t pet the alligators, and they won’t bother you. 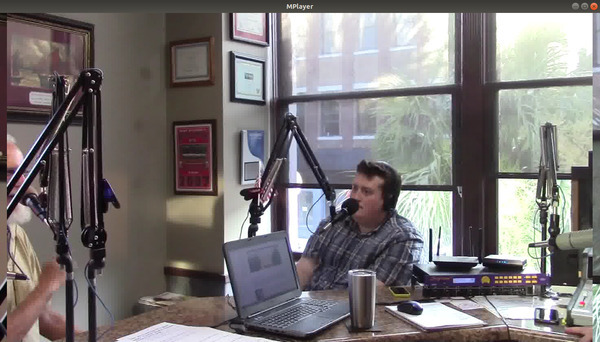 Don’t pet the alligators and they won’t bother you