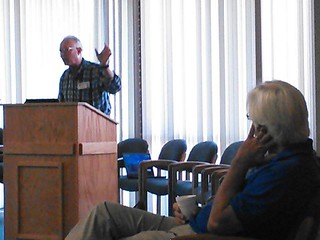 ATLANTA — Georgia may be friendly to its own electric utility and natural gas companies, but the state Legislature sent a strong message last week to outside corporations that their pipelines are not welcome here.

Kinder Morgan, which already operates in Georgia, wants to build a 360-mile pipeline from South Carolina to Jacksonville, Fla. The Palmetto pipeline would connect to an existing one that runs from the Gulf Coast through the heart of the Southeast and would be used to move petroleum.

The project already faces roadblocks, mostly because the company wanted to use eminent domain to condemn land. Gov. Nathan Deal (R) said he opposes the pipeline, and a judge upheld a state Department of Transportation commissioner’s ruling that the pipeline would not meet a significant need.

The story details how an 18 month moratorium on petroleum products pipelines got passed by the Senate, but Don “Mr. ALEC” Parsons’ House committee wanted to provide a loophole for KMI during the moratorium, see also LAKE blog post. Then Kristi Swartz continues saying on day 39 (last Tuesday) of 40 in the legislative session:

The entire day, Kinder Morgan lobbyists flooded the hallway outside the House chamber. They stood alongside a row of burgundy leather ropes and asked representatives to support the amendment whenever it came up. Other lobbyists noted their presence, with some saying it was tough to pass through the hallway.

It wasn’t until 10:30 p.m. that the House readdressed the bill. The amendment failed 61-101, and the more restrictive version, bolstered by the support of the majority leader, passed 116-48.

Yay Push Back the Pipeline!

The reporter quotes KMI about how disappointed they are and how they’ll keep pushing the non-existent economic benefits of KMI’s pipeline.

But that ain’t all.

Stalling the Palmetto pipeline pales in comparison to what happened in the Georgia House earlier that day. The chamber overwhelmingly said “no” to granting easements to the Sabal Trail pipeline.

The reporter quotes the well-known Andrea Grover (haven’t seen her in these parts lately) about, you guessed it, the non-existent economic benefits of Spectra’s pipeline, including the bogus side-taps added very recently to convince some county governments. Then:

A coalition of environmental groups has been fighting the project for more than a year. After the state Board of Natural Resources approved easements last fall, Sabal Trail’s opponents came up with a strategy for the legislative session.

That’s the Georgia Water Coalition (GWC), which includes Waterkeeper® Alliance members Flint Riverkeeper and Chattahoochee Riverkeeper and Affiliate WWALS Watershed Coalition, along with Sierra Club, environmental law firm Greenlaw of Atlanta, Georgia River Network, SpectraBusters, and other groups and individuals too numerous to mention, on the statehouse floor in Atlanta, calling and emailing legislators, letters to the editor, and blogging on the Internet, facebook, twitter, etc.; see WWALS writeup, and about Sabal Trail see the Dirty Dozen 2015,in which GWC listed Sabal Trail for the second year running, at the nomination of WWALS.

Back to the EENews story:

“At that point, we hatched this plan to see if we could interfere with the conveyance of easements,” said Neill Herring, a longtime Sierra Club lobbyist at the Georgia Capitol.

The easements amount to very little, just 0.3 acre of land. But they are key pieces because they allow the pipelines to pass under rivers in Georgia. In this case, that meant the prized Chattahoochee and Flint rivers and other major streams.

Dukes was particularly angry over Sabal Trail’s proposal to put a compression station inside the city limits of Albany. He also was upset because the pipeline’s owners would be taking people’s property for a pipeline whose natural gas would go to Florida electric companies.

Dukes and GWC kept Sabal Trail’s easements out of SR 954 in the Georgia Senate, but they got added back in the House State Lands Committee. Then Flint Riverkeeper Gordon Rogers went to various Republican legislative groups about “natural resources, property rights and local control”, including Rep Regina Quick (R-Athens):

“Here is your chance to push your button and put your money where your rhetoric has been for this session, because by voting ‘no,’ you will tell the federal government, ‘Take your F-E-R-C process, and take it down to the Panhandle and across Apalachicola Bay, and not through the Flint River area of southwest Georgia, where this does not serve our citizens,” she said.

Anti-Sabal Trail lobbyists had one goal, to prevent the easement bill from getting the 91 votes it needed to pass. The Sierra Club’s Herring told EnergyWire he thought they could corral 80 or so votes. If they secured more than 85, the pipeline’s backers likely could not get 91 of their own, he said….

When it came time to vote, the House chamber’s electronic voting board lit up mostly red instead of green. Opposition to Sabal Trail sank the easement bill 34-128.

“We got 128, which is ridiculous,” Herring said. “It’s the most votes I’ve ever gotten on anything.”

Yay Georgia Water Coalition, and the legislators and people of Georgia!

Please remember to thank our legislators who voted against Sabal Trail’s easement boondoggle, and you may want to ask those who voted the other way why.

6 thoughts on “It’s the most votes I’ve ever gotten on anything. –Neill Herring, about GA House against Sabal Trail easements”