Another letter against Sabal Trail and for the rivers and the aquifer in the paper Suwannee Democrat, May 5th 2016. 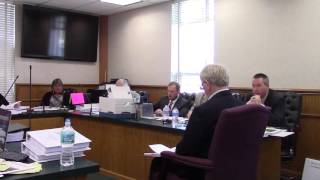 In response to Jason Bashaw’s, Chairman of the Suwannee County Commission, article in the Suwannee Valley Times, I have this to say. Why is it that if people are concerned about the environment they live in, they are automatically placed into this environmental left category? Like many, many people in our surrounding counties, I hunt, fish, hike and paddle our local rivers. I use the environment as do we all.

So, for working and paying taxes all my life — as a Vietnam Veteran, as a person who chose to live in this rural part of Florida and raise his kid, as a person who is not now nor ever will be wealthy — I count our public lands, our woods and rivers as a reward for doing the right thing. I do not mind my tax dollars going towards public lands. Mr. Bashaw uses the environmental left in a derogatory manner as a means of denigrating them, and he is including me in it and I resent it. I resent it for my friend’s in WWALS and others who show concern for the pipeline route. I have not met an environmental lefty among them.

WWALS is, Withlacoochee, Willacoochee, Alapaha and Little River, and if you want adventure try paddling those rivers in South Georgia. It is a sport rather than a leisurely river trip. When you use something, you tend to become protective. WWALS is also the force working to be sure Valdosta does something about the raw sewage spills into the Withlacoochee which has forced no swim zones in the Suwannee. Why wouldn’t you want to do something about the ruining of our waterways and groundwater when you have a right to them and a right to expect them to be clean.

Actually, WWALS is WWALS Watershed Coalition, Inc.. WWALS has always operated in north Florida as well as in south Georgia, since the Alapaha and Withlacoochee Rivers do not stop at the state line, and we deal with complaints about Valdosta’s sewage downstream as far as the Gulf. Valdosta also spills into the Alapaha watershed, although you’d never know that from that city’s press releases, and that ends up in the Suwannee River, too.

Our Mission is: WWALS Watershed Coalition advocates for conservation and stewardship of the Withlacoochee, Willacoochee, Alapaha, Little, and Upper Suwannee River watersheds in south Georgia and north Florida through awareness, environmental monitoring, and citizen activities.

There are ten rivers in our territory. Here’s a list of frequently asked questions about WWALS. And once again the name is WWALS Watershed Coalition, or WWALS for short.

Back to Dennis Price’s letter:

It just so happens that members of WWALS and others took the time to read Sabal Trail’s documents and saw there was something not right about what they present in areas they are familiar with.

Having worked as a Geologist in this area for the past 42 years, WWALS thought I might know something and I use the environment as do we all. I was asked to review the geology portions of the studies that Sabal Trail presented. Specifically the areas where the pipeline will be bored underground; under the Suwannee River, and under highway 90 near the chicken plant on 90 west.

I did review the documents and determined that they misrepresented the geology along the 2,500 feet of horizontal drilling they intend to do to get the 30” steel pipe 35′ feet under the Suwannee River on Suwannee River State Park lands. Did they do this intentionally or did they have to look at 400 or so miles of route and short specific distances were not as carefully looked at. It doesn’t matter, there are numerous open sinkholes within feet of the proposed underground route. Ask any local well driller how difficult it is to keep a horizontal hole open for 2,500 feet without driving casing while pumping thousands of gallons of grout and not lose any in the soft clays and hard rocks they will encounter.

They also ignored the close proximity they will be to the cavern of the Falmouth Cave system where they will jack and bore under highway 90 near the chicken plant. They have no plans to rectify a collapse into the cavern if it occurs.

Mr. Bashaw doesn’t seem to consider the environment we live in as something people consider a part of the economy. So when he blasts the lefties as job killers, he forgets there a lot of small business owners who do make money from the hunters, fishers, hikers, bike riders, motorcyclists, birders, divers, canoers and kayakers. Ask the Town of White Springs, ask Milton’s restaurant in north Columbia County, ask the Spirit of the Suwannee Music Park, ask the hoteliers and camp grounds, ask the RV Parks. I do not know a one of them who opposes industries from coming into the area, they want it done wisely.

Mr. Bashaw knows but most people do not, that the geology report by Sabal Trail did indicate that the route they chose through our sinkhole prone area was not a good one. The Suwannee River Water Management District and FDEP also presented geology reports that expressed the difficulty and potential problems with sinkholes the pipeline was going to face. Brute force can probably solve any problem they encounter but they may muck our river and cave system while they are at it. And by the way, they have to cross the Little River Springs cave system also.

Most of the article seems to be reprints from conservative talk show hosts and he uses their ploys of restating something someone says into something laughable trying to humiliate them. For instance the comment about the human race can be a virus on this planet. He uses that comment to destroy any credibility the person may have, but what was meant is you cannot hide form the facts that we (Americans) practically wiped out the Native Americans, the buffalo, the passenger pigeon, the Carolina parakeet. What about the Turks killing Armenians, the Khmer Rouge killing Cambodians, the Hutu killing Tutsis. You don’t think that they wondered if the Zombie Apocalypse had descended on them.

I make my living from development and have no qualms about the fact we need growth and the jobs they produce. Most of the time that is done wisely and does not compete with our tourism industry. This pipeline produces nothing for us long term and minimal local jobs for local lawyers hired by land owners who do not want the pipeline taking their property or want a better price and the surveyors who get to survey new lines.

We all know how hard it is to get industry to move into our area, the last few years we ended up bribing them to move in by offering tax incentives or paying infrastructure costs. In the meantime, why would we risk the one thing we already have and very few places in Florida have, that is plenty of space to fish and hunt and take our families recreating, all at our front door.

Keep in mind that what prompted Mr. Bashaw’s article was the WWALS group asking the county for a letter to send to the Army Corps of Engineers. The letter to the Corps was to ask them to actually visit the sites mentioned to determine for themselves if the Sabal Trails documents are completely factual. Hamilton County and other counties have written similar letters.

See Geological determinations about Sabal Trail and Suwannee River by Dennis Price P.G.. See also my response on behalf of WWALS to Jason Bashaw’s op-ed in the Suwannee Valley Times. The Times declined to print either response, nor another two that will be posted here soon. Thanks again to the Suwannee Democrat for printing all four. And thanks to Chris Mericle for the images of Dennis’ letter.