This old time radio show, Suwannee River Jamboree Radio Program, has some names you probably have heard of, others no doubt famous at the time, others more local, and others, well enthusiastic.

Welcome to the Florida Folklife Collection podcast series from the State Library and Archives of Florida.

This broadcast, believed to be from 1958, was created from a tape reel transfer of one of the original transcription discs from the radio program. So, let’s sit back and adjust our dial for 1958 and the Suwannee River Jamboree preview, the show’s about to start.

Bluegrass Unlimited has quite a bit of history of that old show, in Live Oak — Bluegrass Among The Evergreens, By Gary Reid, in 2012,

Live Oak has a rich musical history that far precedes the contemporary happenings of today. Next year marks the sixtieth anniversary of the launching of the Suwannee River Jamboree, the country music program that started the love affair with country and bluegrass music in the north Florida region that continues to this day.

The two men most responsible for conceiving the idea for the Jamboree were Aubrey Fowler (1911-1999) and Norman Protsman (1921-2009). Fowler was a very civic minded resident of Live Oak. Over the years, he served as president of the Kiwanis Club, president of the Florida Council of Farmer Cooperatives, secretary of the Jaycees, was a member of the Suwannee County Chamber of Commerce, and was a charter member of the Suwannee River Arts and Crafts Guild board of directors. Protsman, an Ohio native, moved to Live Oak in 1950 and became the manager of the local radio station, WNER, which had gone on the air the previous year; he later bought the station in January of 1953. Like Fowler, he, too, had deep roots in business and community, having served as the president of the Florida Association of Broadcasters and was a member of Rotary and Shriners clubs. As a World War II veteran, he was stationed in England as a member of the 493rd Bomb Group.

It was Fowler’s and Protsman’s concern for the vitality of the community that the Jamboree was originated. Protsman noted not long after the show’s start, “Our original purpose was to bring people to Live Oak and to give them a good wholesome show similar to the very successful Grand Ole Opry and Renfro Valley Barn Dance. Country music is one of the major fields of music in the United States today and we feel that we are in a perfect location for the development of a nationally known show.” Development of the show lay between Fowler, Protsman, and Clarence Parker, a WNER employee with the on-air persona, “Cousin Clare.”

The first performance of the Jamboree took place in November of 1952 in the auditorium of the local high school. About 250 people attended that first program, which featured 16 performers and lasted for an hour and a half. Initially, the program was scheduled as a monthly event, but it was so well received that it quickly went to a bi-weekly format and then weekly.

To promote the Jamboree, a half-hour portion of each program was recorded and sent out to surrounding radio stations. By May of 1954, 14 stations were carrying the preview edition of the show.

The program soon outgrew the high school auditorium by October of 1953 and had moved to one of the tobacco warehouses in town,…

There’s a lot more in that article, about the Jamboree closing down and starting up several times.

Including this about the new (in 1986) Spirit Of The Suwannee Bluegrass Festival, 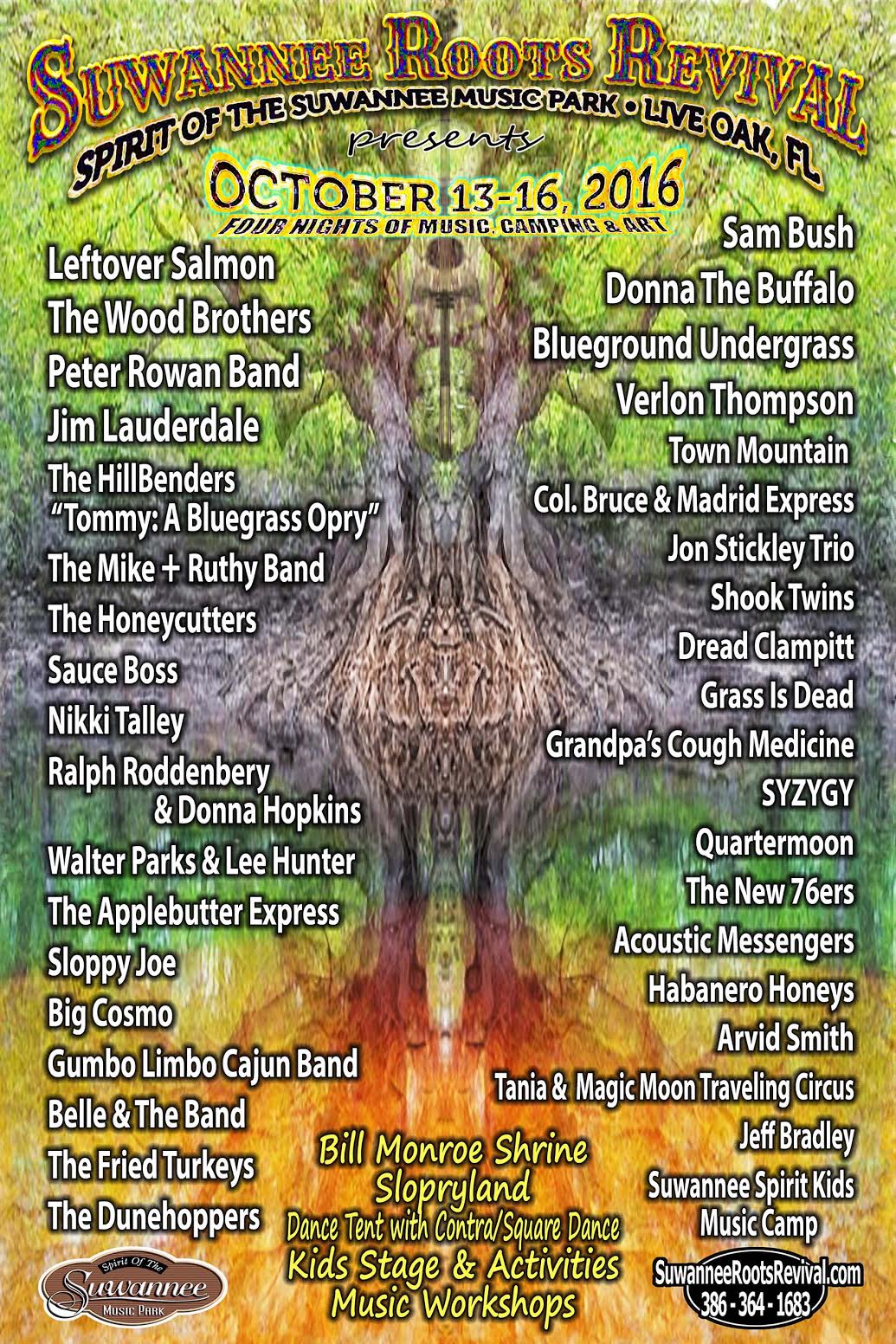 Both those acts had played the Jamboree.

Among the many events at Spirit of the Suwannee Music Park is the new Suwannee River Roots Revival, 13-16 October 2016, with a lineup including bluegrass and and a “Bill Monroe Shrine”. Seems like the Jamboree reinvented yet again.